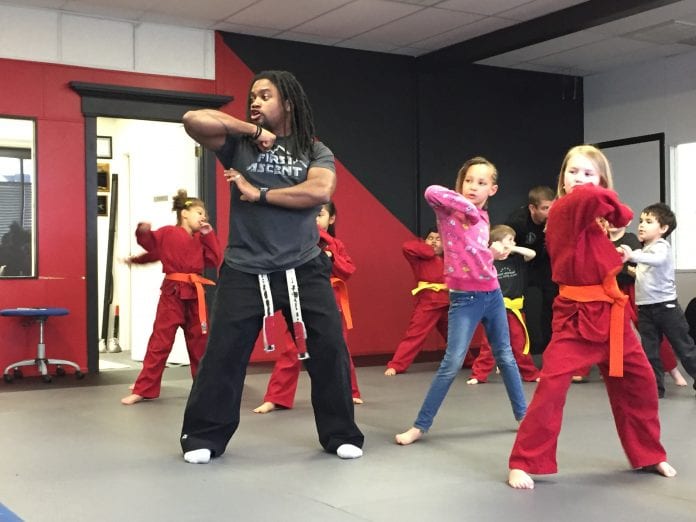 The moment Danny Antoine understood the power of Jesus Christ came during one all-night prayer meeting with his mother in his native Haiti.

He was in a small house in a humble neighborhood in Port-Au-Prince late at night. The women were praying, and he was lying on a sheet on the ground with his older brother. Like so many nights, he would fall asleep and be taken to school the next morning, the adults still awake and praying. The house had nothing but a sheet for a door and all the furniture had been moved outside to make space for the group.

Suddenly, as the adults prayed, there was a commotion of creole-language yelling and items breaking coming from the house next door. Danny couldn’t believe that the prayer group continued without skipping a beat.

Just then, a woman violently thrust her body through the doorway and fell onto the floor, clutching a child.

Following close behind her was an angry man, who stood in the doorway in his underwear with a machete in his hand.

Antoine and his brother were dumbfounded, scared and shocked that there was still no response of fear or concern from the group. Quietly, some of the ladies in the home surrounded the woman, bringing her further into the home, holding her and praying with her.

The man stood in the doorway, breathing hard, his wild eyes darting around the room at the scene, as the group continued to pray.

For five minutes he watched, refusing to cross the doorway. Then, he simply walked away.

“These are the kind of things that I would see going to these prayer meetings,” said Antoine, 42. “There’s a power that I am not fully aware of because I’m a little boy at the time, but I knew that there is something so much bigger than what I understand right now – and it wasn’t until I became an adult and started seeking out the Father myself.”

It’s this and so many stories rooted in the power of his Christian faith that Danny Antoine excitedly tells, waving his muscular arms, his dreadlocks flailing. (He first grew them when he moved to Western North Carolina to better handle the cold weather).

Antoine was born in Brooklyn but moved to his parents’ native Haiti at five with his mother after his parents divorced. He saw little of his father, and the absence of a father figure impacted him throughout his life. For that reason, he has adopted 14 children – some in adulthood – and carries a sense of responsibility for all his “karate babies,” the 80 or so children who attend his afterschool program, and those who are part of his demo team and summer camps.

So much is the responsibility – and the effectiveness of his discipline – that sometimes he is called by school authorities and parents alike to intercede when a child faces disciplinary issues.

“Some of these kids, they would not respond places,” he said, but they respond to his love. “Every time there was a troubled kid, I would realize, ‘It’s not that the kid is troubled. He or she just didn’t have consistency. There was a lack of love, a lack of affection in these kids’ lives.’”

In need of a father figure

When Antoine was 13 years old and his brother was 15, they moved to their grandmother’s house in Deltona, Fla., but the lack of structure led him to mix with unsavory crowds. After having to learn French in a strict school system in Haiti, he found American schools to be a snap.

“Dude, school was a bear – school was serious business over there,” he said of the bouts of French memorization and long essay tests in Haiti. His first day of school in the U.S. was a shock as his teacher prepared the class for a test. He couldn’t believe his eyes when the test was handed to him the following day, “They give me this bubble sheet and I see A, B, C, D, and I’m like, ‘What is this?’”

Having never seen a multiple-choice test before in his life, his teacher explained that he simply had to select one of the four answers.

In disbelief, he thought, “The answer is on the page?! Man, I got it made!”

But the lack of authority, discipline and structure in his life affected him. His grandfather was elderly, and his grandmother worked from 3 to 11 p.m., providing little in the way of parental presence during high school. As long as he got home before she did, it was no holds barred.

One day, he was partying in Sanford when a teenager kept insisting that he knew Antoine. “He comes over to me, holds a gun to my head, he said, ‘Where do I know you from?’”

He saw his life flash before him. The man cocked the pistol. Antoine thought to himself, “What am I doing out here with these fools? You’re supposed to be in your house in a bed right now.” Eventually, all he lost was a hat, his brother lost some cash and a friend lost a pair of sneakers.

“Now, my prayer in that moment, what do you think it is?” asked Antoine. “‘Lord, if you get me out of this, I’ll never do this again.’ He gets me out of it. What do you think I’m doing the next night? Partying again. We were dumb. And I didn’t have many men in my life to grab a hold of me and be like, ‘Stop being stupid. Stop doing dumb stuff, son.’”

After high school, Antoine studied computer programming at a community college, and had a stable job helping wary travelers from the Lake Mary office of AAA. He left work at 3 p.m. and went directly to karate practice, acting on a childhood dream to compete in tournament – just like in the movie “Karate Kid.” He earned his black belt in 1997.

It was karate that straightened out Danny Antoine. Karate and the mountains of Western North Carolina.

Antoine quit community college halfway through a computer programming degree and left his stable job to visit Franklin with a friend in 1998.

“The first thing I saw was the mountains – and the mountains reminded me of Haiti,” remembers Antoine, who was then 21. “Then I realized how far we were from everything else. Then, I thought, ‘Man, you gotta be all kinds of crazy to come up here and be in the middle of Egypt and still get in any kind of trouble – come on, man, there’s nothing out here!”

But his first experiences in Western North Carolina were “horrific.”

“The racism, bro,” he said. “People would call me, be so excited to bring their kids in. Then, they would show up, and they wouldn’t even shake my hand, because they didn’t realize I was black.”

Antoine was competing nationally while teaching kickboxing and aerobics – where he met his Franklin-raised wife, Mary, who he credits with further solidifying the role of God in his life.

Antoine also found his first father figure in Carolina martial arts superstar Jerome “Magic” Johnson. Nervously, he approached him at a fight once, asking for him to be his ringside coach. Johnson agreed, and Antoine was devastated when he lost the fight.

He remembers Johnson telling him: “Don’t you ever walk out of a ring with your head held down. You were my champ before the fight, you are my champ after the fight. You act like a champion.”

Johnson and Antoine developed a close relationship, with the young fighter spending weekends with Johnson and his wife, Ellen, in Charlotte.

Bruce and Cathy Alley also became parental figures to Antoine, even encouraging him to travel to Florida and improve the relationship he has with his biological father. Antoine now boasts that he has three mothers and three fathers.

“I felt like God gave me a karate school so I could get to pursue my dream,” he said about opening his first studio in 2000. “I wanted to travel around the country, do fighting, do tournaments.”

In 2002, Danny Antoine won the world title for the National Black Belt League and he became a local sensation. In 2007, he sat on the hood of his car watching the renovation of the 3,200 square-foot building that would house his current karate studio.

“Years later, God taught me – he grabbed a hold of me and made me understand that the reason why he gave me this was to change people’s lives,” Antoine said. “It wasn’t just for me to run around the country and go fight.”

On a typical day, Danny Antoine is entertaining 65-85 children, divided by belt category and age. He is kissing children on the head, receiving what seem like endless hugs and radiant smiles. An injury to his hips do not allow him to compete anymore, but his coaches – many of whom grew up in his program – have a taste of his own high energy and exuberance.

“Don’t show up here like a bunch of aliens, like you don’t understand what I said!” he yelled as he instructed children to wear their complete uniforms for that upcoming Saturday’s graduation. Then, he started shouting exercise commands while raising and lowering the volume of Buju Banton’s high-energy Jamaican rhythms pumping out of the studio speakers.

“He’s good with the kids. If there’s any discipline issues, he uses push-ups and jumping jacks to get them back on track,” said Danielle Greb, while watching her 12-year-old daughter graduate Saturday. “He really loves the kids.”

Her husband, Jason Greb, added: “He’s the same with adults. I was going through something myself.”

Jason was going through a medical issue and he asked Antoine if he could train with him. Antoine offered for him to come in anytime.

“I wanted to know what it felt like to get beat up,” he said. “I wanted to make sure I’m stronger.”

Shana Combs was also on hand at the packed studio to see her 12-year-old son perform along with demos of flying kicks, blocks and the range of light to seemingly lethal kicks by Antoine himself into the abdomen of graduates, a tradition that teaches humility as a student moves up belt classes.

“Oooh! Oooh!” she shrieked, protecting herself from behind the doorway, her hands clasped in nervousness with each kick to an eager coterie of students. Then, Antoine and the student would hug, and the packed house would erupt in applause.

“Oh God, he’s amazing!” Combs said when asked about Antoine. “He would do anything for these kids. He goes above and beyond every moment of every minute.”

It is clearly apparent in the smiles and laughs that children feel love, attention, respect and care in the hands of Danny Antoine. The parents, too.

“You’re my hero!” Antoine shouted at one child during the Monday practice before graduation. The ebullient girl giggled and hugged him.

“I’m a karate school, but karate is my cover,” said Antoine, when explaining how his faith has helped him to be the father figure for children in need. “You do have a dad. His name is Mr. Danny.”