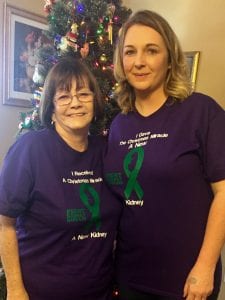 Many people wait years to receive a donated organ. Time runs out for some who wait. And donors are rarely in the same town as the organ recipient.

Pat Cable is calling Sheila Pitts, a Franklin resident willing to donate a kidney, an angel, and the circumstances a “Christmas miracle.” Cable was within weeks of having to succumb to daily dialysis because kidney function is at 8 percent. Cable was beginning to lose hope when Pitts pulled up in her driveway Monday, Nov. 26, and informed Cable she was a kidney donor match.

Within minutes, the short video of the surprise news on Facebook received hundreds of “likes.” No one present was able to contain tears. “I was just sobbing,” said Cable. “It’s unbelievable.”

Cable, whose parents died from kidney disease, has managed the condition for years through a strict diet, medications, etc. However, after a surgery a few years ago, her already struggling kidneys took a hit. Her health deteriorated to the point that specialists said her only hope of survival would be to get a new kidney.

“How do you ask someone to donate a kidney?” questioned Cable. This past summer, she decided to put out a “B Positive” letter on Facebook as a play on words, since a perfect kidney donor match required a blood type of B positive. Neither of Cable’s daughters, Sheila Pereze, who lives in Florida, or Jennifer Willow, who lives in Macon County, were – for various reasons – able to become donors. Many people called to inquire about Cable’s situation, but as she pointed out, following through on becoming a live donor is a serious consideration.

Pitts, who is married to Isaac, a Franklin native, and has two children, Aiden, 10, and Ally, 5, was scrolling through her Facebook feed when she saw Cable’s shared letter. She knew immediately she wanted to donate one of her kidneys when she read Cable’s words: “I want to be here with my family, my husband, who has been at my side for over 35 years, my daughters, and my three grandchildren who I cherish. I know that God has more plans for me.”

She told her husband, “I’m going to donate one of my kidneys to that woman.”

“I blew it off at first,” said Isaac, “but I know my wife, and she’s persistent. She gets her mind set on something and follows through.”

“I really didn’t have awareness about becoming a live donor before I read Pat’s letter,” said Sheila. “I just never thought about it. But I knew when I read about Pat that I could give her something that would save her life … so she could have a longer, normal life. Our job as Christians is to be of service to others.”

“Glory be to God,” added her husband.

Sheila’s decision to become a donor thrust her into a few months of testing at the University of North Carolina Medical Center in Chapel Hill, a four-and-a-half hour drive from Franklin. A donor, explained Cable, must not only be tissue and blood-type matched but be cleared of any health issues before a surgery time is determined. X-rays, screenings, and even a psychiatric evaluation was necessary.

“They took close to 20 vials of blood,” said Pitts, who had an initial conversation and meeting in September with Cable to let her know she was going to pursue clearance as a donor. During testing, Cable and Pitts communicated by phone and through Facebook messaging. All of Pitts’ tests were covered by Cable’s medical insurance, while monies for accommodations, food, and travel expenses related to traveling to Chapel Hill were raised through local fundraising efforts overseen by Cable’s daughter, Jennifer, and her husband, Steven.

“I was on pins and needles,” said Cable, who waited to learn if Pitts would be a match.

The next time Cable met Pitts in person was when her car drove down the Cables’ driveway and Pitts announced donor clearance. Not only was the blood type a match, but tissue typing was a 100 percent match as well.

“It’s rare for that to happen,” said Pitts.

“It’s just amazing,” added Cable. “I felt like I was running out of options and time. And the fact that she lives right here.”

“Without Shelia coming through, Pat would have to go on dialysis in a few weeks, and you usually can’t come off dialysis and get a donor kidney after that,”  said Steven.

“Steven and my daughters are so grateful to Shelia for doing this,” added Pat.

Cable, who wears a mask to protect against germs and viruses, met with Pitts and her family a few days before both of their pre-op appointments. Cable gave Pitts angel ornaments and expressed to her how much she believes that God sends angels to people when they are needed. Interestingly, Cable’s license tag reads, “ANGLEWNGS.”

The Pitts’ son, Aden, said his teacher was so impressed with what his mother is doing that she announced it to the class. “Some of my friends asked, ‘Why?’”

That question, “why,” was asked by some of their friends as well, shared the couple, who were given a weighty instruction manual by UNC Medical Center regarding what is involved with donating an organ.

“Most people were supportive,” said Sheila. “They asked, ‘You can do that?’ But some were skeptical. A few said, ‘God wouldn’t have given you two healthy kidneys if He wanted you to give one away.’”

But both couples met with their pastors, who offered encouragement. The Pitts’ attend LifeSpring Community Church, while the Cables are members of Snow Hill United Methodist Church. Becky DeWitt, wife of Snow Hill’s pastor, David, organized a fundraiser called “Pies for Pat.”

“She worked so hard making pies! I helped a little, but she did the work,” said Pat.

Ongoing donations are needed to assist Cable with additional medical expenses for the estimated $750,000 surgery as well pricey anti-rejection medications.

Surgery date is Dec. 11. Pitts will have a few days recovery in the hospital, while Cable is expects a four to five-day stay in the hospital. Both women are encouraged to stay in Chapel Hill until their post-op appointments in case of any complications. After cleared in Chapel Hill, Cable will have a long recovery to make sure her body does not reject her new kidney.

Although Cable and Pitts were strangers just a few months ago, both women acknowledge how their families were brought together because of a serious need.

“After everyone heals up, we will all have a big celebration,” said Pitts.