Just recently we found another unfamiliar plant blooming along the road side. I often worry that I have given the impression that while driving I am only looking for plants and not the highway. I have to admit I am often the passenger.

Our early February discovery was only in two small clumps. Its small white booms resembled an apple tree bloom to me.  The blooms occurred in pairs facing away from each other. For several days we pondered the identity of this plant. It took a plant identification ID app belonging to photographer Karen Lawrence to identify it as a Bush Honeysuckle. 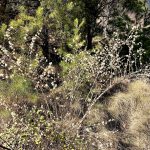 Karen writes, “Seek is an App by iNaturalist that helps identify plant and animals. It is free and not always correct but is a great tool to use to get an idea of your plant observations. It is available for iPhone and iPad. You use your phone’s camera to point at plants, insects, fungi and more, and the App will try to identify the item for you. You can take a photo and have a record. It takes some practice because the camera image has to be sharp and pretty close to the subject. iNaturalist is a joint initiative of The California Academy of Sciences and the National Geographic Society.”

There are other apps that will do almost the same thing.

Considering it is a honeysuckle we were amazed that we found only two small clumps as this entire genus of these plants are considered very invasive. I had never seen this particular plant before. I now know it is Lonicera fragrantisima (Lon-iss-er-a fra-gran-tis -I-ma) having many common names: Winter Honeysuckle, Fragrant Honeysuckle, January Jasmine, Chinese Honeysuckle,  Kiss-me-at-the- gate and Sweet Breath of Spring. These common names are informative which is unusual. It is native to China, blooms in January or earlier and is very fragrant. Reading about it I learned it only infrequently produces berries that are distributed by birds. Some authors have inaccurately labeled this plant invasive. It does not produce enough fruit to be heavily distributed. It only rarely sends up shoots from its roots.

I once went to a garden club meeting where one of the members announced she was new at gardening. “I do not know much except I only want to grow native plants.” This raises some interesting thoughts. Plants from other countries introduced here have the reputation of being invasive because there are no natural predators here to check their expansion. You could say that all plants are invasive to some degree as they need to bloom to reproduce in order survive.  Some are more prolific than others.  A more accurate descriptive term to use in instead of invasive would be aggressive.  But it needs some sort of adjective for clarification.  For example, we have a cut-over bank that was created to make room for our house and the front parking court.  This one area was quickly covered with scarlet oak seedlings that in 14 years have grown to 8-10 feet tall.  Scarlet Oaks are not considered invasive but, on our site, they seem to be invasive but just locally.  We are not covered up with Scarlet Oaks elsewhere.  So, you might say Scarlet Oaks can aggressively germinate in new cut-over areas.   There are many other examples of plant first colonizers in new cuts.  One common one is Sumac.

So, this new gardener more clearly could have said that she did not want to grow aggressive plants or aggressively invasive plants even natives.

Fragrant honeysuckle unlike its cousins is not aggressively invasive. The plants we found most likely originated from bird-distributed seeds from a mature planting we found about 1/14 mile away.  We have vigorously looked for other seedlings in many other areas and have found none.

Lonicera fragrantissma has value as a landscape plant. It is well behaved, growing to just 6-10 feet.  It has no disease problems to speak of. It can be used as an informal hedge and can be planted among other shrubs in a mixed hedge. This is not particularly a handsome shrub so it is not a good choice as a garden feature. It is often planted along a woodland edge. Even its blooms are not very showy.  Its fragrance is its main feature. Its foliage often stays into winter. It does not have particular soil or moisture requirements. It does best in full sun.  Because it blooms so early it could be a good pollen source for bees. It is hardy from Zones 4-8.

I became curious about its one common name Kiss-me-at-the-gate. I could never find an explanation about the name except there are few other plants with the same name. In F. Scott Fitzgerald’s book “The Great Gatsby” there is a description of the house front entrance being flanked on both sides by Kiss-me-at-the-gate. One thing for sure is that you do not need a garden gate to grow this shrub.