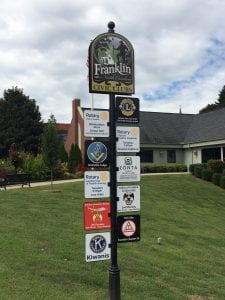 As gatherings go, the lunch scene at area eateries will have a noticeable absence – the Kiwanis Club of Franklin Macon County meetings. Since the early 80s they have met for years up to three times a month at The Boiler Room, Frogtown Market or Willy’s Bar-B-Que. Their primary purpose wasn’t to socialize but to brainstorm ways to improve the lives of children. Formed in October 1984 with a goal to “recruit ordinary people to do extraordinary work,” its track record demonstrates how shared camaraderie and values brought together as many as 40 people for that purpose.

Local Kiwanis President, Judy Comer had a career in education in Georgia, working with children for 32 years – almost as long as the 34 years the club has existed. Long before Comer took the helm as president a few years after arriving in Franklin in 2004, the club was busy engaging the community in children-centered activities, fulfilling the Kiwanis International mission: “Kiwanis empowers communities to improve the world by making lasting differences in the lives of children.” Comer believes the local club has been successful in “doing just that.”

It is that mission that gives Comer hope. While the club is disbanding at the end of October 2018, the local club’s active support of youth and children has visibly impacted the community.

“The local Club has supported the New Century Scholars program plus other scholarships, the placement of Buckle Up seat-belt reminder signs on campuses, the donation of paperback dictionaries to third graders, a Builders Club at Macon Middle, and a Key Club that once operated at the Early College,” said Comer.

Treasurer Jim Brown, an original member, shared a signature achievement: “We were in the Carolinas Kiwanis district that originated the Terrific Kids program in the early 90s. Today, we are identified with that elementary school program that helps give a positive boost to youngsters right here in town. Now the Terrific Kids program is nationwide.”

Tami Norris, club secretary, recounted some of the various community projects backed by Kiwanis: “Macon County recipients have included the Fontana Library System Reading Rover, youth baseball, Holiday Angels, Shop with a Cop, and Kids Place. In years past, as part of a Carolinas District initiative, the Club raised funds for the neo-natal care unit at Mission Hospital Asheville. Lately, the local Club, in partnership with US and international clubs, has supported the Kiwanis International Eliminate Project that provides vaccine to end maternal and neonatal tetanus in developing countries.”

Comer voiced the Club’s appreciation, “We are grateful to the individuals, families, schools, businesses and other organizations that have attended fundraisers and supported Kiwanis youth programs for the past 34 years.” The ending of Kiwanis saddens her, but she finds comfort in knowing members have been inspired by their engagements and will continue some individual projects and outreach to Macon County Schools (MCS). For example, Comer says she has thrown herself at the mercy of some of the school principals to come and read or tutor. She also wanted to thank (MCS) Administrator Renee Burt for being an awesome liaison. In addition, the Waynesville club graciously agreed to oversee some activities that require affiliation with a chapter, such as the Builders Club at the middle school and the Terrific Kids program.

Nonprofits remain essential to thriving communities whether in local neighborhoods, small towns or big cities. While the disbanding of the Franklin Kiwanis leaves a big hole in the hearts of the community, it is symptomatic of challenges faced by many benevolent organizations. From food banks to missions or Lions and Rotary clubs, all face some or all of the challenges sketched by Comer, similar groups and nonprofit counselors.

“Some of our half-time residents stopped participating, some members found other interests in retirement, and those still working have competing demands on their time. It has proven to be too great a challenge to operate an active club with about a dozen members,” said Comer.

Bruce Ferguson, Executive Director of Heart for Families in Franklin, who left his for-profit job to start the nonprofit, Heart for Families to strengthen marriage and families, reasons: “I think the difficulty in the society is there are so many things to do and people are drawn so many different ways – so many things to do with the kids, work and school. And they are choosing where they spend their time. The mission has to really be at the top of the list and must add more value.”

Research from several nonprofit consultants, including Brittenford, Vail Centre and the North Carolina Center for Nonprofits revealed these top challenges:

• Too many groups competing for the available talent, money and other resources

Lack of capable, committed board members with time or desire to serve – that “may be a natural consequence of volunteer boards in an era of overscheduling.”

Benevolent groups may find solace in this statement from the Vail Centre:

“One benefit nonprofit organizations have over corporations is that the people who choose to work for them are often very committed to enacting real change: they really do want to make a difference in the world.”

Comer expressed with heartfelt sadness: “The club has been a fixture in the Macon County community all these years, and it has been an exciting and satisfying run. It will make a change in our lives, Kiwanis members, that we are no longer making a change in the kids’ lives as a club.”