In a region where portrait, landscape, and nature-themed paintings, drawings, and photography dominate artistic pursuits, artist Jesse Dallas has chosen to distinguish himself with a geometric abstract style all his own. Currently, his art is displayed in the Meeting Room and in the lobby at the Macon County Public Library through the month of December.

Kristina Lynn Moe, adult services assistant at the Macon County Library, referred to Dallas’ work as “luminous.” She said participants of a recent yoga class in the library agreed, and the yoga instructor asked the class to “face the illuminated artwork.” 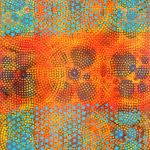 “Nothing could prepare me for how his work would light up the library and sing to the natural dimensions that surround us in our sun and starlit mountains,” said Angela Faye-Martin, who attended the exhibit’s

opening. “It’s a pretty stunning feat to bring universal light into an interior.”

Dallas said he gets “in the zone” when he is painting a new piece and works to achieve variations of light and soothing colors and shapes. During the height of last year’s pandemic until the present, he said he has completed many paintings – most of which are exhibited at the library or in the Adair Art Gallery space in Franklin that Dallas shares with his brother, psychotherapist Robert Dallas, Ph.D.

The Dallas brothers moved to Macon County from Georgia in 2020 after vacationing with family in Western North Carolina for many years. They share a home and the studio and Robert Dallas said he has always admired his brother’s artistic talents.

“I just love his art,” he said. “I may sound biased, but I find it to be very accessible … mindful – the patterns and forms. It is ideal for the studio space because clients feel at ease with the many colors, contrasts, and compositions.

“When people look at Jesse’s work, their minds don’t automatically put it into a category. They see something different each time. There is dimensionality … depth,” he added.

Some of Jesse Dallas’ work is based on the mandala, which is a geometric configuration of symbols that sometimes represents a spiritual journey, starting from the outside to the inner core. Some of Dallas’ work is based on commission; some is waterproof for outdoor use. Dallas makes the frames for his art pieces in a barn space on the farm he shares with his brother.

“My pieces have been purchased for residential use and commercial use, for homes, cafes, coffee shops, offices …,” he said.

Even though his work is distinct, Dallas was inspired by many revered masters: Van Gogh, Picasso, Gaugin, and more.

“I started drawing when I was a kid,” he said. “I got my first blue ribbon in an art show when I was 11 or 12. I was really supported by teachers and then professors.”

Dallas attended Young Harris College and Georgia State University for art and then decided on architecture at Auburn University. However, he realized at Auburn that architecture was “too strict” a medium for his artistic talents.

During his lifetime, he has achieved hundreds of paintings primarily using enamel paint. Some of his pieces are in frames that appear to “float” an inch off the wall while others are in shadow-type boxes. Some are panel paintings. His favorite medium of late is canvas on wood that includes a layering effect. Sometimes he uses “styles” – or stencils – to create recurring shapes. “It’s a mixture of techniques and I use different sizes of brushes, and sometime even spray paint. I’m like a street painter who paints inside and I’ve been influenced by street muralists.”

Inspiration for Dallas’ work comes while he is painting.

“I get an image in my mind and I start in an area and push the boundaries and keep working until it’s done. I don’t like to leave pieces if I don’t have to. The art just reveals itself as I’m working. Sometimes I look at it and decide it’s finished and other times I feel like I need to do more. When it’s finished it’s a rewarding kind of exhaustion. It’s a surreal experience because I get in this place of being super creative. People ask, ‘How did you do that?’ and I sometimes tell them, “I don’t know.’”

Once he was asked to listen to a piece of music and paint something for a musician’s home.

“I just got so inspired by that music that the art became a true expression of the music,” he said.

Even though he admitted that many people in Macon County may not be familiar with modern abstract art, he received positive feedback during a Nov. 4 launch of his exhibit at the Macon County Library.

“It’s not for everyone, but this is art people don’t get tired of because when you spend time gazing at it, you see something different each time.”