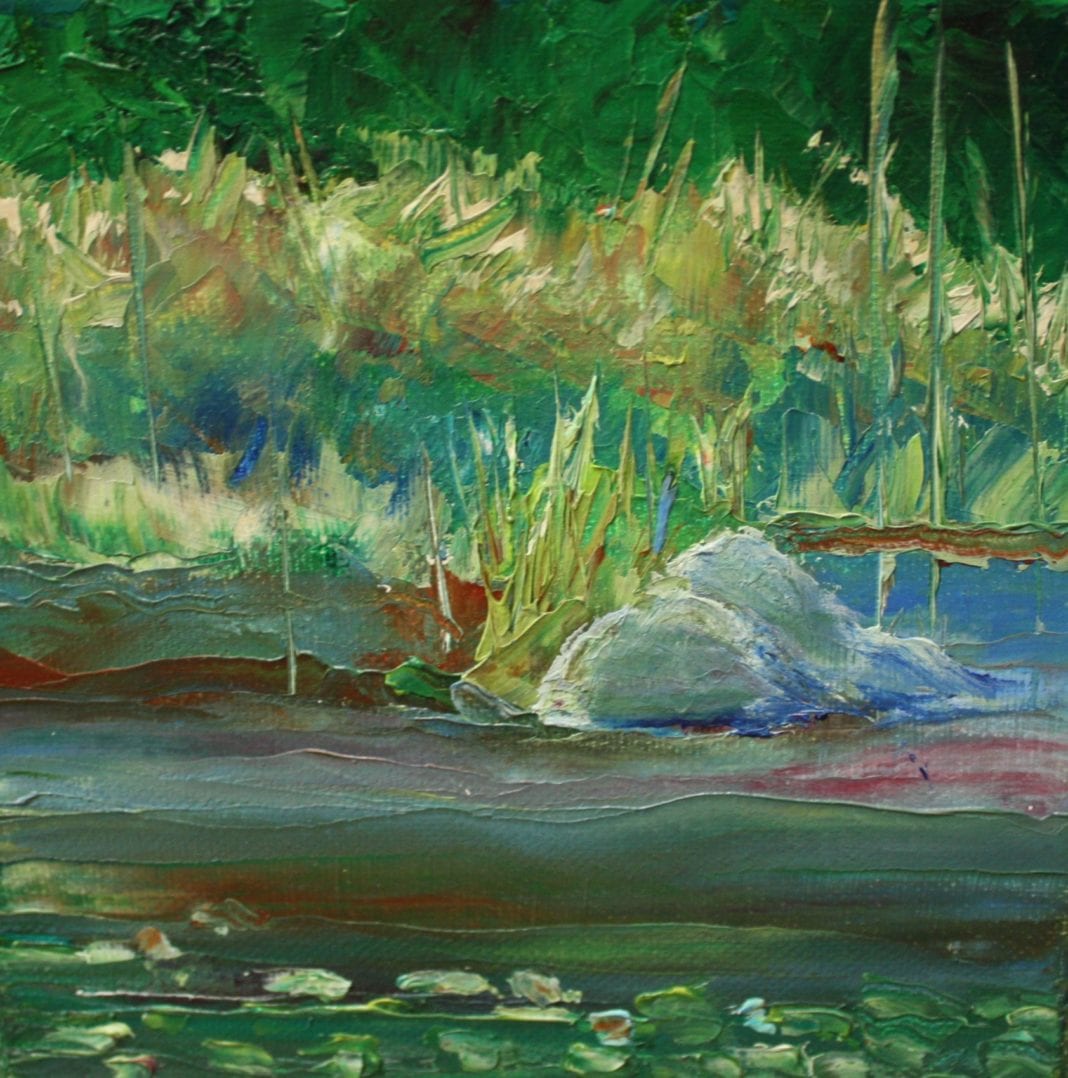 Through the month of February, Lynn Babiarz is introducing herself to the Franklin arts community with a multi-media display of her artwork.  The exhibit displays not only her current versatility as an artist but also the evolution of her art career throughout her life.  Several mediums of art showcase her artistic flexibility:  oil paintings, color pencil and water color.  The oil collage and water color collage have been added to her repertoire since arriving in Franklin about two years ago.

Lynn Babiarz was born Lynn Barber in Greenwich, Conn.  Barber actually was an Anglicized corruption of the Polish name Babiarz which her ancestors brought to America in the 17th century.  Later, as an adult she abandoned the Americanized surname and returned to her proper Polish name.

Her Quaker forefathers migrated to this country, settled in Pennsylvania and began to spread out.  Her childhood home in Connecticut was near the ocean where Rye Beach was frequented by the family.  As a result, coastal scenes have been prominent in her artwork, especially during her earlier years, being reinforced by her presence in Florida as an adult.

As early as elementary school, her natural artistic flair began to flourish and gain attention as her work was frequently displayed at local art functions.  She also had exhibits in the local public library.  Pencil was the dominant medium she used until high school.

Arriving in West Chester, N.Y., for high school, she embarked on a business course of study, with art taking the back seat on her list of priorities.  She did take art classes for a couple of years as an elective while there.  She was introduced to basic art techniques using a variety of artistic mediums.  One requirement in art class was to paint a portrait in oil (a medium she had little experience with up until this time).

Inevitably high school graduation rolled around, and Babiarz prepared to enter the job market.  She applied for office work with a commercial fire insurance company in White Plains, New York.  On her job application, she had listed her talent and interest in art.  She was hired by the company, not for office work, but was placed in the drafting department of the company.

She remained there until she married a military man and moved out of town.  For the next two years, Fort Knox, Ky., was their home.  She gave birth to her first daughter while living there.  Her art production waned some while living there, only producing sporadic sketches and some tempera painting.

After completing a two year enlistment, her husband moved his family back to Connecticut, this time to Danbury.  Three more children came along during their 10 years in Danbury.  Babiarz (married name was Radcliffe), was able to take a weekly night class with a local artist, primarily pencil sketching through this segment of her life.

The early 1970s brought another move for the family, this time to Inverness, Fla.  With all four children in school, she became more serious about honing her skills.  She enrolled in adult education art classes.  The class was very casual, with the students critiquing each other’s work.  As her confidence grew, she joined an art club and began exhibiting her work in art shows. She and other artists would set up displays on the streets, erecting wire fences and hanging their work.  As a member of the local art guild, she was exposed to a number of well-known artists who encouraged her and helped promote her career.

Then she and her husband divorced, opening up a tumultuous period in her life that lasted several years.  She left Florida, moving to Washington State to be with her brother and his family. The trek between Florida and Washington occurred several times for short periods of time.  On her last trip to Washington, she was house sitting for a couple, which gave her a lot of time to paint, but she desperately missed her family.  She said she was sitting in the public library, crying and homesick when she decided to move back to Florida.

After a second short-lived marriage and a stint in Rogersville, Tenn., she settled into Florida again, this time more seriously involved in painting.  To support herself and her painting, she did residential home care providing day care and companionship to people who could not care for themselves.

The question remains, however, “Just how in the world did she finally get to Franklin, North Carolina?”  The first person to mention Franklin to her was one of her residential care patients, who had a second home here.  Then a University of Tampa art teacher told her about the mountains and told her she needed to check it out.  Finally, a close friend and neighbor from Danbury, Conn., moved to the Cowee Community and encouraged  Babiarz to come to Macon County.

When her daughter wanted to come up and investigate Macon County,  Babiarz caved in and came along for the ride.  She visited for about a month, then returned to Florida.  Her daughter and grandson moved here in 2013.  In 2014, Babiarz sold her home in Florida and transplanted herself in Macon County.

Upon her arrival in Franklin, she joined an art class at the Crawford Senior Center with Reesa Boyce, who encouraged her to expand her horizons into new mediums.  Now, two years later, she is exhibiting her work in the library conference room for the public to enjoy.  Her work will remain there until Feb. 28.

‘On Your Mark, Get Set, Read’ at the Macon Public Library...

‘James & the Giant Peach’ a different kind of show for...