Home News Community After a lifetime of public service, Officer Seagle hangs up his badge 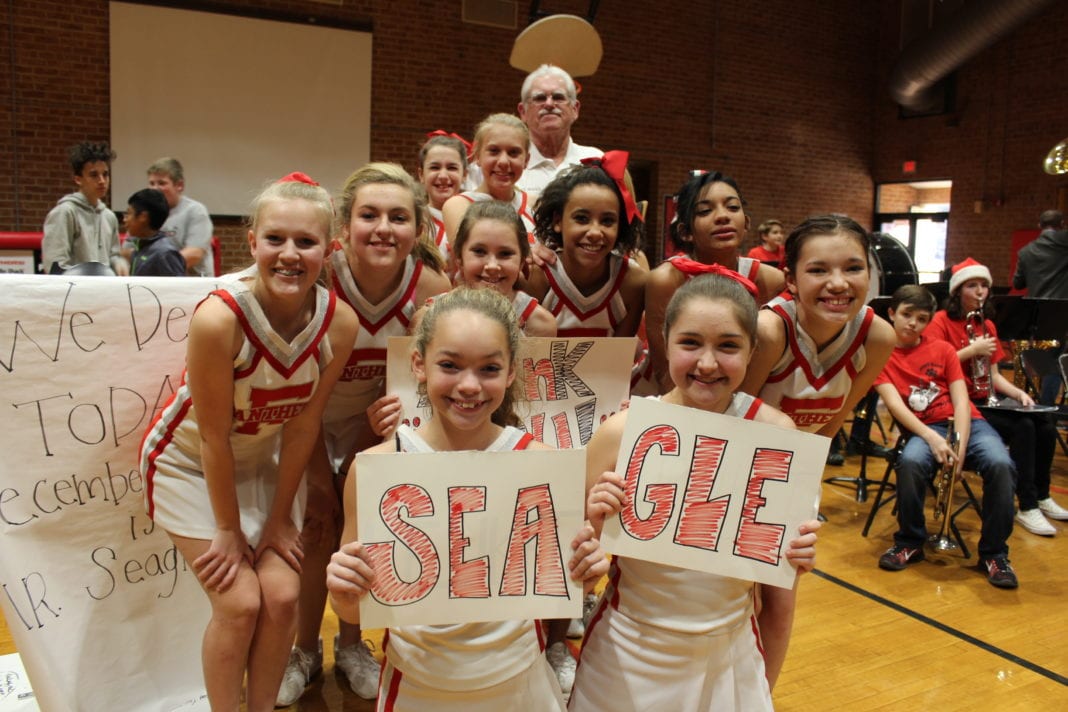 Officer Donnie Seagle was one of the first of two School Resource Officers (SRO) ever to be hired in Macon County under Sheriff Homer Holbrooks more than 15 years ago. When he was hired as an SRO, his resume already consisted of 30 years of experience with the Forest Service, a career from which he retired on Aug. 1, 2001. Without even a month to rest after his retirement, Seagle began working the Macon County Sheriff’s Office’s new SRO program. For the next 15 years, Officer Seagle faithfully served the community as an SRO of Macon Middle School.

“Donnie has played an important role in our schools and as a member of the MCSO,” said Macon County Sheriff Robert Holland. “He has been a role model to many of the kids he swore to not only serve and protect… but love. They knew he meant business but also knew a hug wasn’t far away.”

With his retirement scheduled for the end of the month, Macon Middle School surprised him with a retirement ceremony last Friday, filled with speeches of appreciation and performances by the students.

“I was shocked, overwhelmed, so very appreciative,” said Officer Seagle. “From the teachers, to the staff, to the kids, all of those folks mean so much to me.  It’s going to be very hard leaving a place I really enjoyed going to every day.”

Seagle started his career with the North Carolina Forest Service on Oct. 15,1971 as an assistant county ranger in Randolph County. After serving in Rockingham and Transylvania counties, Seagle returned to Macon County as a county ranger in 1984, where he served until his retirement.

As part of his job with the forest service, Seagle was charged with enforcing laws pertaining to burning laws, setting fires to woodland, and sedimentation laws, all of which required a law enforcement certification from the state.

During a chance encounter with Robert Holland, who was then a deputy under Sheriff Holbrooks, at the City Restaurant, Seagle found out about the new SRO Program Holland had been tasked with starting and due to a grant, two SROs were hired, Seagle, and Bill Harrell, who now serves as the Police Chief of Highlands.

“Sheriff Holbrooks gave me the honor of picking the best candidates for the position and supervising them. Officer Seagle has proven he was a great choice,” said Sheriff Holland. “The other man hired at that time is now the Highlands Police Chief. Both were pretty good choices to start off a brand new program in our county. We’ve come a long way.”

“I could not have envisioned the difference in my job in forestry and that as an SRO,” said Seagle. “From fighting a forest fire in the Highlands area, which encompassed 100-plus acres, had 13 volunteer fire departments, helicopters, and endangered many, costing thousands of dollars for residents, to being an SRO at Macon Middle School couldn’t have been any more different than night and day.”

Seagle said that because the SRO program was new when he started, a big part of his job was proving the position’s worth to the community.

“Initially the thoughts from the community were ‘it’s a shame our schools have to have law enforcement officers at school.’ After one or two tragic  school incidents in the United States, we began to try to change this thought to this is,’for the kids, not because of them.'”

“Officer Seagle has been a fixture at MMS and in the Macon County School system for over 15 years,” said Dr. Baldwin. “He has had a tremendous positive impact on our students during that time.  The school board and I are grateful to him for his service.”

After 45 years working in public service, Seagle is looking forward to retirement.

“I plan to spend my retirement on the family farm,” said Seagle. “I’m looking forward to the opportunity to spend some time with my family, especially the grandkids.”

Seagle’s family is equally excited to have more time with him at home.

“I have always respected and appreciated my dad’s work ethic and his dedication to his career,” said Todd Seagle. “Growing up, I was fortunate to watch him find not just one, but two careers that he loved and served in for 45 years. He was able to balance his career and his family and I couldn’t be more proud of him and all that he has accomplished.”

Candidates gear up for mayoral race

Songwriters in the Round to meet July 21 at the Macon...