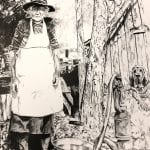 “I know so many people because I’ve been here all my life,” said Deitz, who shook hands and visited with attendees who perused his work.

Deitz remembers drawing regularly around age 4. He said artistic talent has been evident for generations on his father’s side of the family.

“I used to doodle and draw in church. My mother used to give me a piece of paper when we sat down so I would be still and quiet.”

In middle and high school, Deitz sketched portraits of other students and gave them away when completed. He also drew caricatures. Franklin High School art teacher Mrs. Hemphill, was an inspiration. By the time he graduated, he knew he wanted to pursue something creative, so he enrolled at Southwestern Community College and obtained an associate degree of applied sciences in commercial art and advertising design.

For a short time, he hand-painted billboards for Santa’s Land.

Unable to secure a full-time career in art and design, Deitz worked in factories and eventually Lowe’s. However, he never stopped drawing – and over the years has had freelance and commission assignments.

“In 1998, I started doing prints, and then my art just progressed,” he said. Currently, he refers to his work as Country Illustrations by Appalachia Artist Dennis Deitz, and many prints are available for sale at the Macon County Historical Museum. He also enjoys meeting people and talking about his work at various markets and festivals.

“I just like Appalachian heritage and nature,” said Deitz. “Both sides of my family are from here. My mom’s a Tallent. So I want to try and show how life was and is.”

“And then whatever ideas are in my mind … I might take this person and put him there and just piece things together. Some of the people’s faces are people I know.”

For example, a print of a cabin at Cade’s Cove is accurate; however, the deer in the foreground are from a photograph he clipped from a hunting magazine, “because my deer photographs are not that good.” 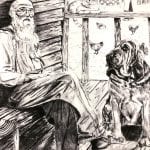 A photograph of an elderly man against a house shows him wearing a hat; however, when Deitz painted the man, he painted him without a hat and added the neighbor’s hound, Boomer, as well as his cat, Marvin.

In fact, Deitz has a story to tell about every print, what inspired him and information about the main elements in the scene.

“I’m a doodler,” he said. ‘I don’t just draw things as I see them. I just let my imagination go crazy and I can really get into it and draw for hours.”

Deitz said he has probably drawn, using pastels, charcoal, pencil, or pen and ink, at least 100 scenes. Some of his prints are smaller sizes, while his largest is 18 by 24 inches.

Deitz quipped that he is a happy “starving artist” who is enjoying semi-retirement because he has much more time to create art that “preserves the old Appalachian ways.”

The Midtown Men to perform in Franklin this Saturday

Painting Along the Way Local artist Carol Conti conveys her...