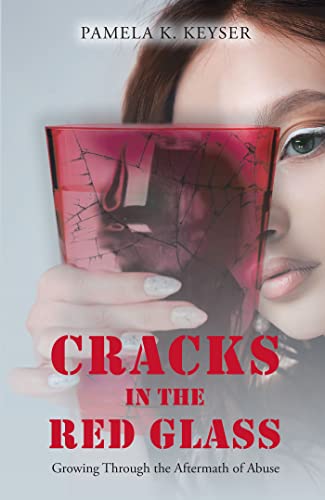 Published last year by Christian Faith Publishers, “Cracks in the Red Glass” is by local author Pamela K. Keyser, who decided to tell her story of surviving a hellacious childhood to becoming a “joy-filled woman” in hopes that individuals with relatable stories might be helped by her “tale of courage, healing, and hope.”

Keyser’s plight began when she was five years old and she realized her parents were having issues with alcohol. After her parents divorced, her mother “spiraled into heroin abuse.” The ensuing years involved Keyser being kidnapped and raped by her mother’s boyfriend and time spent in and out of children’s homes and/or with various relatives. Her “worst abuser” was her stepmother. “She was physically abusive, and I ended up having to live with my father to finish up high school.”

But, she added, “One of the blessings is that I knew I wasn’t okay and I looked for help. If I hadn’t done that, I would have continued to seek people who were abusive because that’s what I was used to.”

Keyser uses the pseudonym “Sadie” throughout the book, but the raw story that throws graphic punches is hers. Because she chose not to sugarcoat the abuse aspects, reasoning that “rape has become just a four-letter word – a word no one wants to talk about because it is an ugly word,” she provides alerts to readers in case they want to skip over descriptive portions.

The book’s title, “Cracks in the Red Glass,” alludes to metaphor and imagery based on an incident that happened with her stepmother, who she refers to as “the lady.”

“I was standing with her watching some black men carry some furniture back and forth from a delivery truck to the house, and I asked her if I could get them water. She said to give them water in the red plastic glasses. The older gentleman drank his down and I gave him my red glass to let him drink that, too. Then she told me, in front of the men, that the red glasses couldn’t come back into the house. I kept the red glass that one of the men drank out of and I considered it a ‘win’ for me. So the red glass became a symbol that I could get through [all the pain and abuse]. The ‘cracks’ are symbolic of emotional cracks. I realized that goodness could prevail. I kept the glass, and when I needed courage, I would drink from it and look through it to see a rosy hue. It became my talisman. I realized after that that kids [in abusive situations] will find solace wherever they can.”

The book’s chapters serve to outline Keyser’s life – what happened that was abusive and how her life was redeemed in many ways.

“Surrounding myself with good people was the first thing I did as an adult,” she said. “I got into therapy and I married a man who has encouraged me and loved me.”

She continued, “My story is a lot of people’s story, especially with so many parents on heroin these days. I see so many kids whose parents are addicted. Kids in homes where there is addiction and abuse are raised with so many defense mechanisms. As adults, they will have to dismantle those mechanisms.”

Keyser’s story does have a happy ending.

“I was a hurt, wounded, scared child,” she wrote in the introduction, “but I came through, got therapy, surrounded myself with honorable people, and healed. I’ve been married for 47 years to a wonderful man who helped me when I’ve asked. … As a child, if anybody had told me that I would be married long-term and filled with joy, I would have laughed at them or perhaps cursed them.”

The book took at least a year to write. She had written a different version prior to Cracks in the Red Glass and that original version took 10 years to write.

“I think this book shows the aftermath and how I crawled out of the ‘secrets.’ As long as I had secrets, I held myself in shame. This book was the last step in setting me free. I have broken the chain of abuse and addiction, and if nothing else I can be proud of that.”

Keyser’s book is available on Amazon.com, Barnes and Nobles.com, and at bookstores. An e-book version will be out in about six months.

(Reviews about books and interviews with authors are in no way an endorsement of the book or the author by Macon County News or the article’s writer. Such articles simply provide to readers information about both.)

Lewis Smith to bicycle 600 miles to raise funds for children’s...