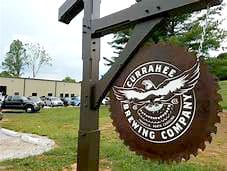 Currahee Brewing in Franklin announced over the weekend that 100 % of the proceeds from the sale of their Boogaloo Beer will be donated to civil rights groups.

“We will be giving all profits from any sales of Boogaloo-branded beer, to civil rights organizations and to help families affected by the unjust killings, destruction, and riots around the country,” Currahee Brewing wrote on Facebook Sunday night.

Brandon Hintz, co-owner of Currahee Brewing with locations in Franklin and Alpharetta, Ga., said that the brewery made the decision over the weekend after learning that one of their beers, “Boogaloo” was being used by a Hate Group to represent themselves.

“This racist Hate Group is reportedly causing destruction and possible violence in the otherwise peaceful protests around the country,” said Hintz. “Once we were made aware of this, we pulled all beer and any branding associated with the beer and will be disassociating ourselves with the term ‘Boogaloo’ immediately.”

Currahee began crafting the beer last December. During branding discussion surrounding the beer, like many of their beers, a name and concept relevant to Currahee’s brand and current in today’s society was developed. Branding discussions were occurring simultaneously with a movement across the United States to defend the Second Amendment. Currahee Brewing has built its business built on military support, even named for such.  Currahee originally stems from a Cherokee Indian word which roughly translates to “Stand Alone.” The brewery was named Currahee in honor of the Cherokee people who are deeply rooted in Western North Carolina as well as the brave men and women in the military who fought and continue to fight for freedoms today. Currahee is the official motto of the 506th Infantry Regiment, originally designated as the 506th Parachute Infantry Regiment (506th PIR) during World War II, a unit of the 101st Airborne Division. The unit was made famous by their role in Operation Overlord (D-Day), Operation Market Garden, the Battle of the Bulge, and many other campaigns throughout World War II, and the Vietnam War. When a nationwide discussion involving the Second Amendment arose in Virginia, with a significant movement sprouting in Currahee’s hometown of Franklin, Hintz and his staff drew inspiration from the movement.

“Back in January, there was legislation being proposed in the state of Virginia that would have stripped law abiding citizens of their 2nd Amendment rights,” said Hintz. “Like others who express their opinions peacefully, it was something we disagreed with given the circumstances of that proposed amendment. While, I, myself didn’t serve in the Armed Forces, we have countless family members and friends who did, who took an oath to uphold our Constitutional Rights. Rights that we hold dear. From the 1st – 27th, not just the more controversial 2nd. When Virginia proposed the new laws that would have all but done away with one of our country’s foundational amendments, tens of thousands of people gathered to peacefully protest the laws.”

Hintz noted that as a result of those peaceful protests, that particular legislation was not passed in Virginia. As a representation of that simple, peaceful protest resulting in the upholding of the 2nd amendment in Virginia, Currahee decided to make a label for the recently brewed Imperial Stout, depicting George Washington in modern attire, with a Gadsden Flag on it as the focal point.

“While thinking about a name, we found some information and memes depicting the term “Boogaloo,” said Hintz. “After seeing some more items on Boogaloo, we understood that it was a saying, more or less, objecting to the oppression and potential over-reach of a government, whether that’s the State or Federal government, which is why we went with it.”

The term Boogaloo gained popularity in late 2019 and early 2020 as a term referring to a grassroots rebellion against government overreach. But as circumstances in the country have changed in recent weeks after the killing of George Floyd by a police officer in Minnesota, the term Boogaloo was adopted by hate groups to take on a different meaning, something Hintz said he never saw coming.

In addition to the name of the beer – the imagery used on the can depicts George Washington in a Hawaiian shirt – which was part of the attire used by protesters late last year in Virginia, but like the Boogaloo term has evolved. The uniform of wearing a Hawaiian shirt has also shifted over the last few weeks to represent hate.

“We were made aware of the correlation to our beer and hate groups on Saturday night and first thing Sunday we pulled the beer and all branding,” he said. “We find any and all forms of racism or any form of hate, morally reprehensible. We believe everyone should be treated as equals, no matter their race, religion or political view. And with the civil unrest happening around the country right now, the last thing we want to see is more violence, property destruction, or worse, death. We do, though, believe in every person’s right to peaceful protest. Our hearts break for friends and families of George Floyd, Ahmaud Arbery, Breonna Taylor and all others that have been affected by these travesties. We too, are extremely saddened and frankly enraged by these racially motivated and clearly unlawful events that seem to continuously and unjustly occur in our communities, particularly to those African-American communities, around the country. For Currahee to have any association to a word that is now used by a racist group, we deeply apologize as it was severely unintentional.”

While Currahee took immediate actions to rectify the association – Hintz felt that simply pulling the branding was not enough.

“We didn’t want to just pull the beer and make it go away,” said Hintz. “We wanted to use this as an opportunity to turn a negative into a positive, which is why we made the decision to use the funds from the beer to benefit civil rights groups working for systematic and meaningful change in our society.”