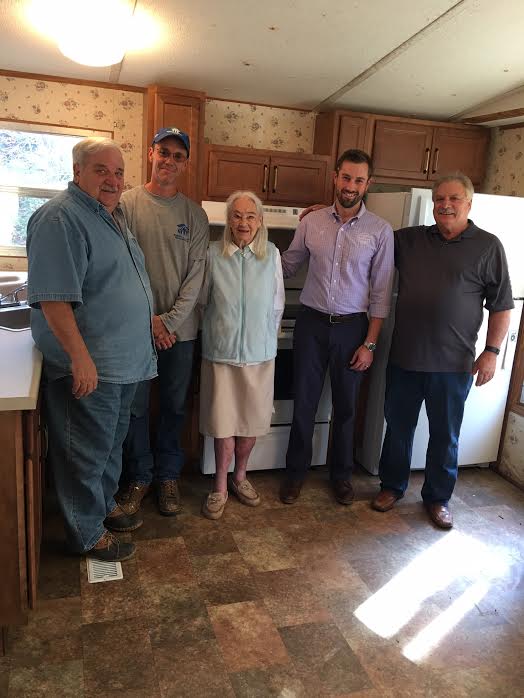 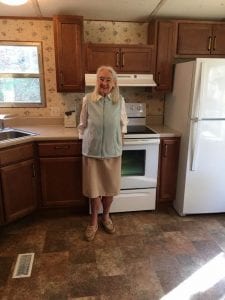 Three years ago, Mattie Buchanan, who was born in Macon County and has lived in Sanderstown on the road named for her family for nearly a century, sprung a leak in her water tank. The water damage destroyed her home, which was built in 1993. At the time, her insurance company paid to repair some of the damages.

Over the next three years, residual damage from the busted water tank began to take a toll on Mattie’s home. Her insurance company had since dropped coverage of her home and wouldn’t consider additional coverage for the incident. Not knowing where else to turn and faced with a deteriorating floor, she reached out to Mr. Bullis, the man who helped her three years ago, for advice.

Mr. Bullis visited Mattie’s home and refused to let her continue to live in the crumbing home without help. He got to work to see how her home could be repaired. Mattie lives alone and is on a fixed income. Mr. Bullis enlisted the help of Habitat for Humanity, and after completing the application process, Mattie was deemed eligible for the program’s assistance and work began shortly thereafter.

“We were so thankful for Mr. Bullis reaching out to us and were happy to help repair Ms. Mattie’s home,” said John Wert, general contractor for Habitat for Humanity. “She didn’t really know where to start and after she was referred to us, we got to work.”

Mattie’s house was coated with mold, and the kitchen floor was falling in.  The water leak had deteriorated the floor and cabinets.

Knowing Mattie was in need of more than just a new kitchen floor due to the damage, Wert reached out to Kevin Tague with Suke Enterprises, who donated a new set of cabinets and countertops, valued at more than $5,000 for the kitchen. Wert also worked with Macon Appliance, who donated a new refrigerator, range and range hood for Mattie.

“We have always loved partnering with Habitat for Humanity,” said LT Gilbreath, owner of Macon Appliance. “They are a great organization that does a lot for our community.  Ms. Buchanan was desperately in need of a new kitchen so we wanted to do whatever it took to help her out.”

Macon Appliance donations of nearly $2,000 in new kitchen appliances, along with the new floor installed by Habitat for Humanity, and the new cabinets, was, according to Mattie, the greatest gift she has ever received.

“I thank Habitat for Humanity and John Wert with all of my soul, body, and mind,” said Mattie. “And the new kitchen appliances is the greatest gift I have ever had in my whole life, you know.”

When Mattie graduated from Franklin High School in 1940, she took a job earning $3 a week at a local cafeteria. She went on to business college to learn skills like typing and shorthand writing while working at a Children’s Hospital in Atlanta, where her brother lived.

“Back then, we didn’t make a lot of money and we just worked to stay busy or to stay our of trouble,” said Ms. Mattie. “It was a lot different back then than it is today.”

Mattie said she was so appreciative of Habitat for Humanity and that she was eligible for the program and the help she needed to fix her kitchen.

“We were so grateful to have the opportunity to help someone in our community, especially in time for the holidays,” said Gilbreath. “Miss Buchanan was such a pleasure to meet and talk to. She was such an inspiration, and we hope to help others like her in the future.”

Suminski named Citizen of the Year at annual Chamber banquet