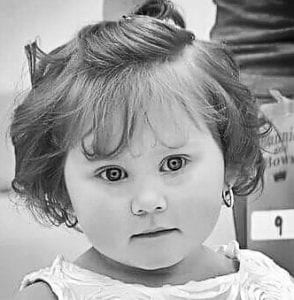 Rylee Jane Taylor, was crowned Miss Mini Ultimate Supreme, at the Bunnies and Bows Pageant held April 2, Haralson Memorial Civic Center in Blairsville, Ga.  At two years old she  won the highest title in her age group 0-4 years.  Scoring several perfect 10’s in each category she was crowned the Judges Choice. Rylee received her 2nd crown for Best Personality. She was also chosen to have the Prettiest Hair and Prettiest Smile. Rylee has participated in one previous pageant and won Grand Supreme Miss Sparkle.  Winning over all 0-16 age groups.

The Bunnies and Bows Pageant uses this event to raise awareness of children in foster care. Contestants were asked to gather donations for the children with the contestants gathering the most receiving a crown. Rylee received her 3rd crown in this category with a donation of nearly 400 items.

Rylee is the daughter of Jonathan and Anna Taylor  both Franklin natives. She loves her animals which include Gigi the pig, Uno her little baby goat and Crackle the dog. She enjoys yelling “go boys..go panthers” at sporting events and she looks forward to more pageants in her future.

Sheriff Holland will not seek re-election