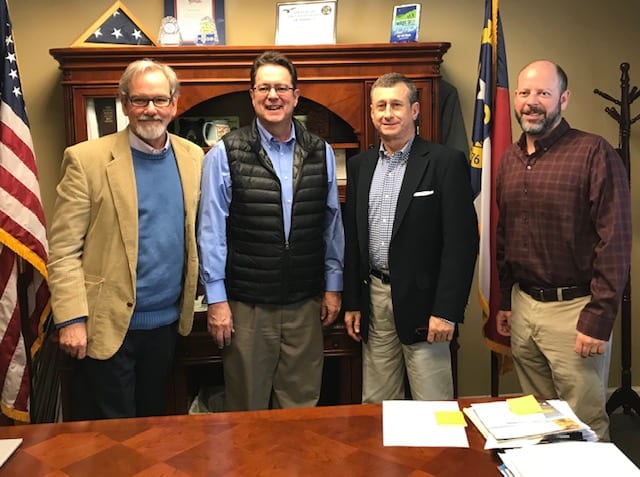 On a one-day listening tour through Macon County, Dan Gurley, senior advisor to North Carolina House Speaker, said a vote was about to be scheduled to overturn Gov. Roy Cooper’s Friday veto of a measure that would require voters to present photo IDs at the polls.

“We’re about to schedule a vote on it,” Gurley said after a Tuesday meeting at the community building on Georgia Road, adding that House Speaker Tim Moore believes he has the votes to overturn the referendum-supported bill before Republicans lose their super majority in the State House. “I don’t think we would call a session if we didn’t think we had them [the votes].”

Gurley was in town at the behest of District 120 Rep. Kevin Corbin, who parlayed his House seating assignment into a friendship and insider status with Moore and his staff.

“I’m a pretty straight shooter and I tell it like it is,” said Rep. Corbin. “[Dan Gurley] has a lot of influence with the speaker, and what that tells me is I want to be in good with him.”

Chuckles erupted around the room from representatives and employees from the Macon County Board of Commissioners, Sheriff’s Office, School Board and Town of Franklin, before each outlined community needs to the policy advisor with the speaker’s ear.

The veteran Republican chief of staff and policy advisor for North Carolina representatives revealed he “can talk mountain,” having grown up in Spruce Pine in Mitchell County, where he lodged with his mother the night before the meeting.

Gurley said the speaker had Corbin’s back, and he said listening sessions like these were important to policy-making.

A thread throughout the afternoon was a call for increased funding for K-12 education, including bolstering teacher salaries and paying for needed resources.

Rep. Corbin said 2017’s House Bill 13 put an additional $600,000 in the school superintendent’s budget, but a proposed $2 billion school bond was in the works, adding that he would likely be chosen as one of its co-authors.

“I agree that this is going to happen,” Gurley said. “But the manner in which it happens, there’s still an opportunity to shape it.”

Gurley said the issue was being followed closely by the speaker, adding that “without being heavy-handed,” the speaker did not rule out legislative remedies for preserving rural healthcare.

Later, Holland interjected his position on an immigration question posed by County Commissioner Karl Gillespie, who believes the current guest worker program is “killing us on agriculture” due to high administrative costs to employers wanting to participate.

“You can’t pay somebody $35 an hour to pick squash, so we’re having a shortage in labor,” said Gillespie, who explained that a base pay of $10 an hour is inflated exponentially when housing and federal administrative costs are factored in.

Holland said if immigration legislation was drawn up that required his force to lock up unauthorized immigrants, county resources would be strained severely. He said the county’s jails have been at-capacity since September 2016 and the county pays $400,000 to house overflow criminals in out-of-county jails.

“We could fill up our jails every day this week with people who are here illegally,” said Holland. “But do I want these hardworking people who are out here trying to make a living and provide for their families? Or, do I want this person who’s addicted to drugs who’s breaking into people’s houses in jail?”

Gurley also visited Highlands ahead of meetings scheduled for Wednesday in Andrews and Murphy regarding possible investment that would extend the Great Smoky Mountains Railroad between the two cities.

Rep. Corbin has brought Speaker Moore to Macon County on at least six occasions to make certain that he knows of needs in the rural west of the state.

“I’ve been here a number of times and I most certainly do,” Gurley said of the speaker’s and his familiarity with the area. “I’m a western guy even though I’m on the other side of Asheville.”

Roundabout construction gets moving, but benefits will take time