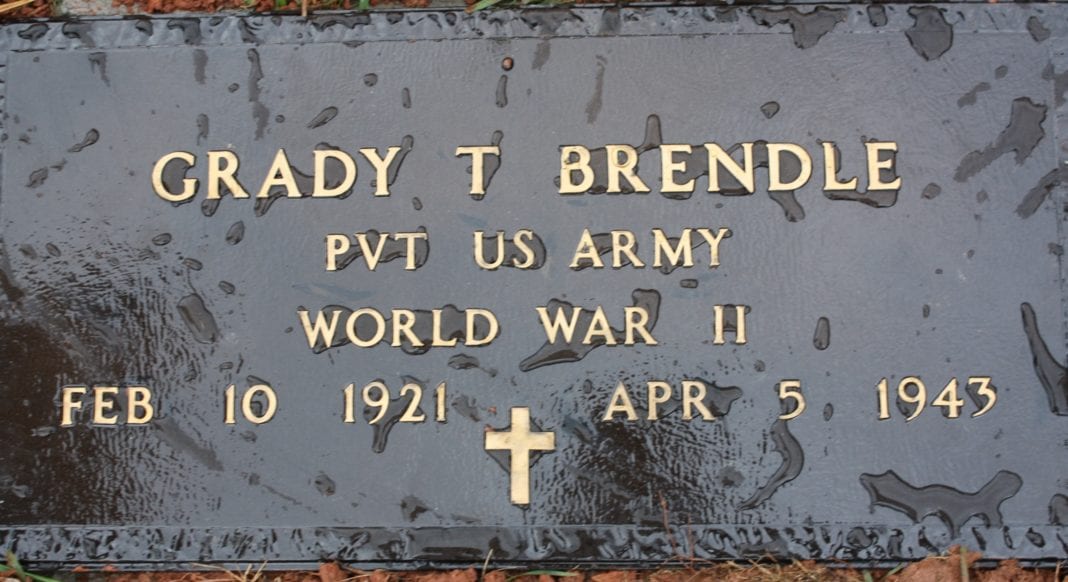 On Wednesday, Feb. 15, a joint funeral detail of the Franklin American Legion Post 108 and Veterans of Foreign Wars Post 7339 gathered in the cemetery of Watauga Baptist Church to give honor to Private Grady T. Brendle, United States Army.  Private Brendle, 22, died in a training accident on April 5, 1943, while preparing for deployment overseas during World War II.

Someone, apparently a family member, had requested and received a bronze plaque from the Veteran’s Administration to mark Brendle’s final resting place. Yet, the marker was never placed at the gravesite and remained in his sister’s home for more than 60 years.  Recently, in a house-cleaning process of Private Brendle’s sister who recently passed away, the bronze marker was removed from the house, taken to the dump and discarded.  An employee of the landfill retrieved the relic and immediately contacted the American Legion Post 108 in hopes of giving the plaque the proper respect it deserved.

The American Legion Post Commander, James McGill, led the effort to have the plaque cleaned, restored and placed properly on the deceased’s grave.

“When we were first contacted about the bronze marker, we knew we wanted to do something to rightfully honor Brendle and his service and sacrifice to our country,” said McGill.

Brendle was born in Macon County on Feb. 10, 1921, and at just 21 years old, he left his hometown and headed to enlist in the army. During World War II, Brendle was sent to Fort Benning, Ga., to begin his training for the military.

Private Brendle’s mother, Lula Brendle, requested the bronze marker from the United States Department of Veterans Affairs, but for some unknown reason, never placed the marker on Private Brendle’s gravesite at the family’s plot in the Watagua Baptist Church Cemetery.

Before tracking down Private Brendle’s final resting place and piecing together his life, the gravemarker was kept safe at the American Legion. American Legion member Neil Riendeau did the detective work, investigating Private Brendle and after reaching out to churches on Brendle Road, was able to locate his grave.

With decades of wear and tear on the bronze marker, members of the American Legion elected to have the marker refinished before placing it where it belonged. Custom Creations of Otto was chosen to refinish the marker, and, according to McGill charged a modest fee for an excellent job.  The work was paid for jointly by the American Legion Post 108 and the Veterans of Foreign Wars Post 7339.  McGill expressed appreciation to Lowes of Franklin for donating the concrete to lay the base for the marker and to Appalachian Ace Hardware for providing the mounting bolts to secure it in the concrete.

Commandant McGill led a simple, reverent ceremony giving honor to the long departed young man who died while preparing to go into combat to help defend his country. The ceremony opened with the Pledge of Allegiance to the American Flag and prayer by Chaplain Carl Moyer. McGill spoke briefly, offering words of appreciation for Brendle’s sacrifice and then opened the ceremony to anyone else who wished to speak, giving honor to Brendle and other young men like him.

“Grady Brendle chose to volunteer and wear the uniform of the United States,” said McGill. “He was a member of the Greatest Generation and a man that paid the ultimate sacrifice in support of his country.”

Brittney Burns contributed to this article.

BBB: Watch out for Coronavirus scams