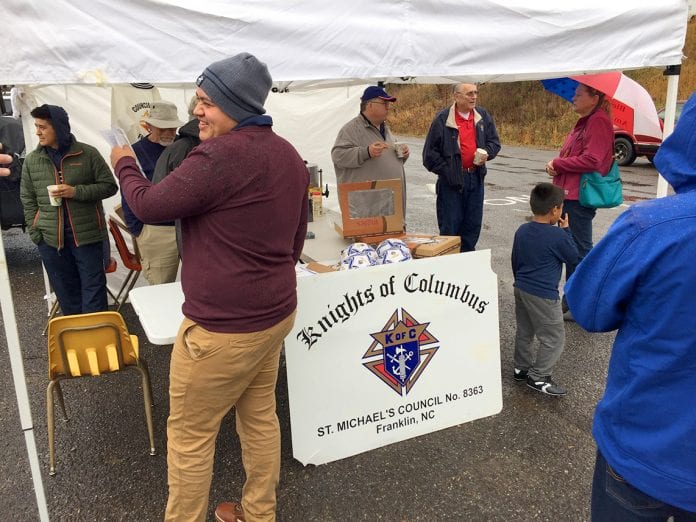 It was 50 degrees and rainy on Saturday, Dec. 1. On Saturday, Dec. 29, the Macon County Industrial Park soccer fields were flooded. What would be the first annual Knights of Columbus children’s Soccer Challenge has been postponed twice. But if organizer Luis Jiménez was frustrated, you certainly couldn’t tell from his ever-present ear-to-ear grin.

As the Grand Knight, or leader, of council 8363 of the Catholic men’s organization, Jiménez and the half dozen or so Mexican board members represent a youthful, multi-cultural future for the aging local chapter. The 85 or so men strengthen their faith, deepen their community involvement, and support those in need through the 35-year-old group that meets the first Tuesday of the month at St. Francis Catholic Church.

“It’s a learning experience, I’ve done a lot of training,” said Jiménez, 39, who immigrated to Franklin from the high plains of Querétero, Mexico, when he was 20 years old. He met his wife in Franklin and was married at St. Francis Church. In his second year leading the organization, Jiménez has attended Knights conferences in Hickory, N.C., in May and the North Carolina councils´convention in June.

“I was the only Hispanic,” he said of the Hickory training. But that’s not true across the Carolinas, where Hispanics are increasingly taking on leadership roles in the organization and in their communities, said Knights of Columbus field agent Bill Matthews, 60. Three of the 16 councils in Matthews’ Western North Carolina range have Hispanic Grand Knights.

“A lot of younger families are coming into Macon County,” he said while on hand to help with the first soccer challenge rain-out in December. Four children were testing out one of the new soccer balls on the wet field behind him.

Matthews added that even with a nationwide trend away from Catholicism, St. Francis’s parish is growing in a multi-cultural way. He estimated about two-thirds of families are of Hispanic origin.

“It takes a little bit of effort,” he said of fostering fraternity between the Anglo and Hispanic populations. “We take these two groups that are really very different culturally, and we try to do as many activities as we can as a group.”

Matthews said the local chapter is getting up in age, with only about 45 active members. The organization needs young, eager leaders to stay strong and relevant in the community.

The Knights raise several thousand dollars for local charities, including veteran’s groups and needy families. They also host a number of activities, such as Christmas dinner with intellectually and developmentally disabled community members and their families. The soccer competition is a new tradition with deep roots in the Latino culture that Jiménez hopes to start.

The group is primarily about faith, Jiménez said at a Huddle House breakfast in late November alongside fellow Hispanic Knights Filomeno Pérez and Victor Mora, all dressed in navy blue Knights polos and caps.

Mexicans are overwhelmingly Catholic, and when they move to the area, they look for places to practice their faith. While the Knights have councils in Mexico, none of the local leaders were familiar with the group until they settled in Franklin. Local elders encouraged them to join and taught them organizational and structural know-how to take on leadership roles.

“As Grand Knight, he wants to start and do his own projects that he feels are going to be connecting the community together, and this is perfect,” said Matthews, with a nod to the traditional Latino love for soccer. “This is the Holy Spirit working.”

This year’s Christmas dinner for the disabled gave Jiménez his first opportunity to chair an event. Leadership is not a trait that comes naturally for him even though he has owned his own painting company, “LJ’s Painting,” for the past 15 years.

Jiménez recalls the meeting when nominations for Grand Knight were taken. So many brothers nominated him, that he reluctantly accepted their confidence.

Knights study and learn about the Bible and its teachings, advancing to each of the group’s four degrees: charity, unity, fraternity and patriotism.

“It is a privilege as an immigrant to come to the U.S. and feel welcomed in the fourth degree,” said Jiménez, who has achieved the honor.

Of the changing make-up of the local chapter, he said, “A lot of the Anglo brothers don’t participate –- it’s a transition where the Knights of Columbus is passing into the Hispanic community. I’m feeling part of something big, and it’s in our hands.”

“A lot of people in this town need help,” said Pérez, 40, who immigrated to the U.S. from coastal Veracruz, Mexico, and lived in Los Angeles and New Jersey before settling in Franklin, where he specializes in custom-built cabinetry.

Pérez said the Knights have helped him and his fellow Knights practice their faith, adjust to living in the U.S. and deepen their ties to the community.

He said before the Knights, he felt unaccepted by Anglos in America, but also unable to go back to his home country, where he is ostracized after living in the U.S. for two decades.

Mora, 32, who has a seven-year-old boy, agreed with the struggle to adapt.

“We are trying to learn the traditions.”

Pérez elaborated. “We try to get involved in this community and celebrate all the national holidays. We are part of this country.”

At the breakfast interview, Jiménez was gleeful about all the Knights national material he had received in the mail to help him organize and promote the soccer competition, including sample press releases, soccer balls and medals to hand out. No matter that the event was designed to be held in September.

Even with snow flurries forecast for early December and recent record rains, Jiménez had high hopes he could field six to eight teams of 5 to 9-year-old children in a Western North Carolina winter.

Back at the Industrial Park, under a tent with raindrops pelting his shoulders, Matthews deadpanned, “This is going to be a magnificent event next year.”