Saturday morning a group of artists met at the Gazebo in Franklin and counted beautifully decorated rocks one by one until the very last — the 540th rock — was counted. The rocks were painted blue and features a red heart in the center — the original design of the Paint a Rock, Hide a Rock event held around the world on July 24.

A movement to share random acts of kindness has spread across the country and taken root in Franklin over the last few years. The rock painting group held an event over the weekend to send a special message.

Brenda Thorn pitched the idea of the event to other members of the Franklin NC Rocks group after coming across the idea of The Paint a Rock, Hide a Rock first proposed by Nancy Powell Pierson. Pierson, whose original rock group is Northeast Ohio Rocks, started in 2016. The group has 206,000 members and is the largest rock painting community in the World. 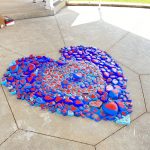 “That is what drove me to start Paint a Rock Hide a Rock Day,” said Pierson. “I wanted to bring together rock painting groups so that the members of those groups could see the inspiration around the World and so they could know what they do matters. We are all a part of something larger than ourselves.”

The rocks were taken by members of the group after the event and hid around town and on various travels. Later on in the week, someone posted on the Franklin NC Rocks group that they found one of the rocks on the Greenway and dropped it a rest stop on their way to Georgia.

The celebratory rock holds a special meaning — the blue represents the world and the red heart represents the kindness created by painting and hiding rocks. The design was kept simple, so all artists with all abilities and talents could participate.

The public Facebook group for the event has more than 5,000 members and featured participants from all over the world in places such as Germany, California, Connecticut, and England.

Members of the Franklin Rocks Group spent the last two months decorating their contribution to the event, and were able to complete 540 rocks in the short amount of time and hope to grow the event for next year.