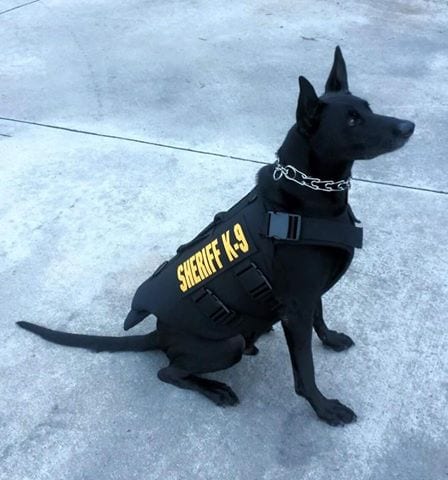 Macon County Sheriff’s Office four-legged officers are getting a little extra protection thanks to a grant sponsored by the Franklin Veterinary Hospital.

Two of the sheriff’s department’s three canines were outfitted with specially made bullet and stab protective vests, thanks to a donation from the non-profit organization Vested Interest in K9s, Inc. The vest was sponsored by Franklin Veterinary Hospital, P.A.

Vested Interest in K9s, Inc. is a 501c(3) charity located in East Taunton, Mass., whose mission is to provide bullet and stab protective vests and other assistance to dogs of law enforcement and related agencies throughout the United States. The nonprofit was established in 2009 to assist law enforcement agencies with this potentially lifesaving body armor for their four-legged K9 officers. Since its inception, Vested Interest in K9s, Inc. provided over 2,000 protective vests in 50 states, through private and corporate donations, at a cost of over $1.7 million. All vests are custom made in the USA by Armor Express in Central Lake, Mich.

“We are extremely thankful for our relationship with the Franklin Veterinary Hospital,” said Macon County Sheriff Robert Holland. “Not only did Dr. Frank Stagnitta and his staff donate our first patrol canine vest but he also reached out to a company called Vested Interest. A second patrol vest was provided by this company and we are currently looking to outfit the third and final patrol canine.”

The program is open to dogs actively employed in the U.S. with law enforcement or related agencies who are certified and at least 20 months of age. New K9 graduates, as well as K9s with expired vests, are eligible to participate.

The donation to provide one protective vest for a law enforcement K9 is $1,050 through the nonprofit. Each vest has a value between $1,795 – $2,234, and a five-year warranty and an average weight of 4-5 pounds. There is an estimated 30,000 law enforcement K9s throughout the United States.

According to Sheriff Holland, the vests are very important to their handlers. “Having the canines outfitted with the vests gives the handlers a level of comfort  knowing that their canine partner has protection against gun shots and knife attacks,” said Sheriff Holland.