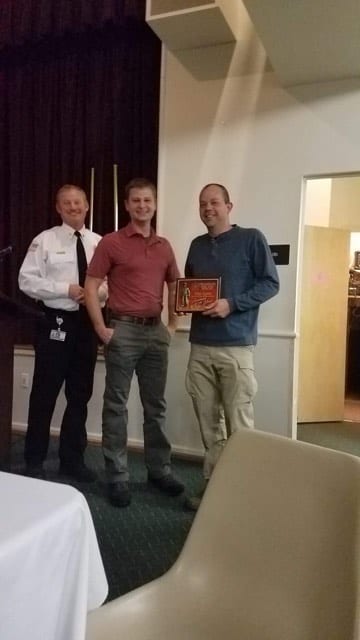 For the second time in his career, Timothy Lynn was named Firefighter of the Year for the Franklin Fire and Rescue Department.

“I was genuinely surprised and caught off guard,” said Lynn.  “Since I won the award a couple years ago I certainly wasn’t expecting to win again. We have many firefighters both employed and volunteer who I look up to within the department who set a good example that I just try to follow. Every one of them is deserving of the award.”

“Timothy definitely deserved it,” said Hursey. “He made over 54 percent of the fire calls for 2017 and surpassed everyone in training hours. I was excited to be able to present him with the award, just one year after he gave it to me. It was definitely a neat experience.”

Lynn joined Franklin Fire and Rescue in early 2014. Like many who join the fire service, Lynn said he had been fascinated with firefighters and fire trucks since childhood, and has never quite grown out of it.

Lynn has a career as a police officer with the Franklin Police Department and never thought he would be able to do both.

“But God had other plans and opened the doors,” said Lynn. “As a police officer I work alongside the fire department on many calls and I’ve always looked up to them and the hard work and dedication they have for the community. Some of these firefighters kept prodding me to come and join them because they could tell I was really interested in what they do. I still hesitated to join though, because I know the vast majority of what the fire department does is actually medical calls, and I had absolutely no interest and was admittedly scared of the thought of doing medical stuff. Despite this, I went and spoke with then Chief Warren Cabe and asked him if he’d consider letting me join on condition that I only did fire/rescue side and not medical. He readily agreed and said there are others on the department who only do fire/rescue.”

Although he joined the fire department adamant he would only do fire/rescue calls, he reluctantly started responding to the medical calls he tried so hard to avoid, which lead him down a new path and gave him a new passion.

“Earlier this year I was able to participate with other local EMS and firefighters on a trip that went to Honduras for a medical missions trip,” Lynn said of how joining the department had changed him. “And this upcoming Saturday I will be taking my final school tests to earn my EMT-Basic certification. All I can says is, our Almighty God has a way of changing you and equipping you when He has work that He wants you to accomplish.”

While the job has its highs and lows, Lynn said it’s one of those lows that has stuck with him as his most memorable response.

“Unfortunately, my most memorable incident was a tragic one,” said Lynn. “It was memorable because it was a structure fire that I was first on scene to and when I got out of my truck even above the roar of the fire all I could hear was the screams of a distraught wife screaming at me that her husband was still inside. And as badly as I wanted to help her, the fire was simply too intense to allow that.”

Lynn said serving as a volunteer firefighter is similar to his career as a police officer.

“The hardest part of the fire service is similar to the police service, you see people when they are in some of the worst situations of their life,” said Lynn. “It’s hard when you’re on the scene of a structure fire when the homeowner or business owner walks up to see that everything they’ve worked for and every material thing they have is ruined or destroyed by fire and water.”

Like when he responded to a call with a trapped husband inside and Lynn’s role went from firefighter to comforting the victim, he believes the most rewarding part of the job is being able to be a sliver of light in the dark times.

“The most rewarding part of the fire service is when you know that you’ve made someone’s most tragic moments a little more bearable,” said Lynn. “When you’re able to retrieve a small boy’s toy he was playing with in the car just before it was in a collision and take it to him while he sits in the ambulance. It’s being able to take someone’s hand who was just seriously injured in an accident and letting them know that they are not alone and help is here. It’s hearing a simple yet genuine “thank you” from someone you just helped or the loved one of the person you just helped.”

“Firefighter of the Year is presented to the one individual of any rank who best exemplifies the positive characteristics of a member of the Franklin Fire & Rescue Department and who has a notable record of service and achievements,” said Rohrer. “This award is presented to the individual who has given selflessly of themselves in support of the department, the fire service in general and the community. Franklin Fire & Rescue’s 2017 Firefighter of the Year Timothy Lynn has demonstrated the highest degree of dedication and participation to activities within our fire department including training, fire response and other fire department operations. The award is voted on by the members of the department which means a lot for the individual that wins.”

Because Firefighter of the Year is chosen by the department and all the members with whom Lynn serves alongside, that is something he thinks offers value to the honor.

“I appreciate the recognition from my fellow firefighters choosing me as Firefighter of the Year,” said Lynn. “I give God the glory though because He is the one who opened the doors for me and equips me to be a part of this service. God also has surrounded me with amazing firefighters, paramedics, nurses, CNA’s, police officers, family, friends, and strangers, who set an example for me, teach me, encourage me, prod me, test me, pray for me, protect me, guide me, correct me, and love me….and I’m thankful to God for providing these people in my life in order to be able to do this work for our community.”

Law enforcement and emergency personnel bid farewell to one of their...

Tom Wanson gives a life of service as a Command...