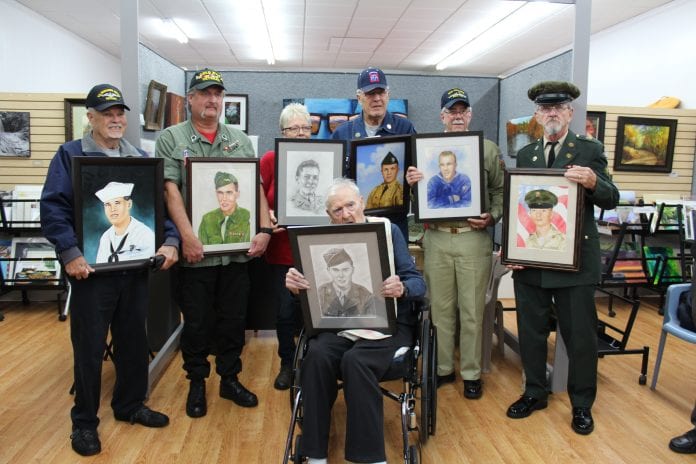 Annually, Macon County Art Association at Uptown Gallery on Main Street presents veterans portraits in celebration of Veteran’s Day. On Nov. 12, veterans, family members, friends, artists, and the public gathered for the unveiling of portraits representing servicemen from the Navy and Army. Some served in World War II, while others enlisted in the 1960s or 1970s.

“This just means a whole lot,” said Terry Lane Duvall, son of John B. Duvall, who passed in 1996 and was with a division called the Timberwolves, which saw combat in World War II from October 1944 to May 1945. “My dad was my hero,” he said.  Terry attended the unveiling to receive the portrait of his father.

“Dad didn’t want to talk about his service in Germany, and after doing research on the Timberwolves and their battles in Europe we now understand why,” shared Duvall.

Apparently, the group came upon the Nordhausen Concentration Camp. Terry said he will make copies of his father’s portrait and present them at Christmas to family members.

The Veterans Portrait Presentation was established in 2011. Veterans or a family member or friend submits an application a year prior along with a photograph of the veteran taken during his or her service. A few are selected and a local artist volunteers to paint or draw the portrait. This year, seven veterans were presented with their likenesses: Thomas Harvey Cabe, John B. Duvall, Ralph Horace Duvall, Richard E. Eichner, Douglas Keyworth, John Washington McDowell, and Robert “Dick” Sheehan. Mediums included watercolor, oil, and pencil. Artists who volunteered their time to paint the portraits were Dominick DePaolo, Teresa Register, Pat Mennenger, John Houglum, Jean Blackmer, Margie Kellam, and Carol Conti.

“Portraits are difficult,” admitted Houglum. “But we do it to show appreciation. They’ve all done an honorable thing for this country.”

Artist Carol Conti agreed, adding that she enjoys capturing a veteran’s personality as it is conveyed in the photograph. “What struck me about him [Sheehan] was his smile. I don’t want to just copy the photograph, but instead to capture the person.”

“I was thrilled to paint John’s [Washington McDowell] portrait,” said Kellam, “because he

was so good looking. “It’s always special for me to do these portraits because my father was a World War I veteran who fought on the front in France.”

McDowell will turn 94 in January. He attended the event, but his son, Mike, spoke for him, sharing that his father did not talk about World War II often. However, he told his children that a tank he was on was shot by a cannon and he was blown off and suffered a concussion. McDowell was on a troop transport during D-Day, but eventually made it to Normandy and saw action in France, Belgium, Luxembourg, Holland, and Hamburg, Germany.

Sheehan decided when he was 14 that he would follow in the footsteps of his uncle “heroes” who served in the military. He joined the Navy upon graduation from high school in 1961. He spoke about the “old ways” of celestial navigation, mathematical calculations with pen and paper, and hand plotting charts. Once, his crew was docked near a location where actor John Wayne was filming for a movie.

The veterans or a family representative shared various stories of military service. Eichner explained how his mother picked up a Time magazine in the 1960s and was surprised to see on its cover a photograph of him with a few other servicemen.

“Just to see this appreciation for veterans means so much,” said Eichner about the portrait event. “There is so much for veterans to be recognized for and I’m honored to be part of this.” He already has a spot in his bedroom where his portrait will hang; when he passes, he said his daughter, Julie Eichner, will inherit the portrait.

Benefactors for the Nov. 12 event were Phil and Sharon Drake. Patrons included Jennings Builders Supply and Hardware and Nantahala Bank & Trust Company. Donations help cover costs of framing and other supplies. Application deadline for the 2019 Veteran’s Day portraits is July 4, 2019. The project is on a first-come-first-serve basis and there is a limit of 10 veterans chosen annually. Applications can be picked up at Uptown Gallery.