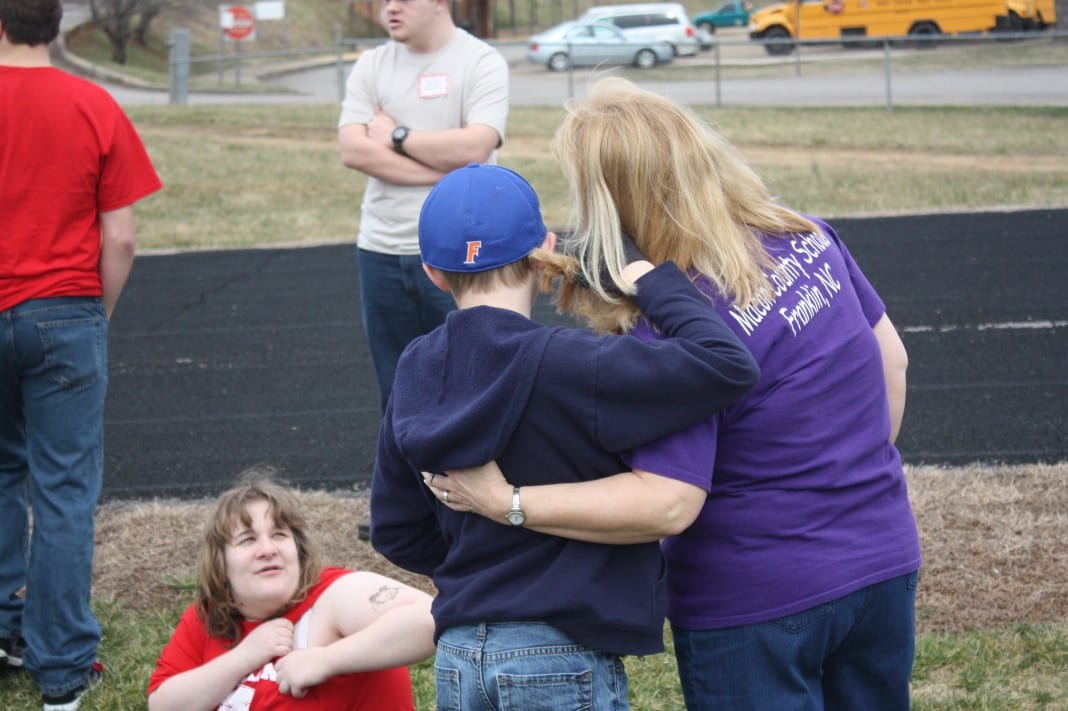 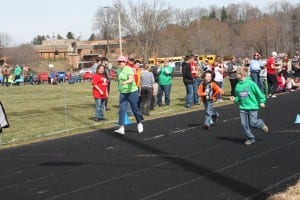 The Far West Region is comprised of special needs athletes from Macon, Graham, Clay and Cherokee counties and the Qualla Boundary.  These athletes are persons with intellectual and developmental disabilities. All age ranges are represented in the games, from elementary school level to senior citizens.  The athletes participate in track events which include walking, assisted walking, running, and wheel chair events. The distance of the races are from 10 meters to 100 meters and a 4×100 team relay.  The field competition is comprised of the long jump, softball throw, tennis ball throw, and shot put. 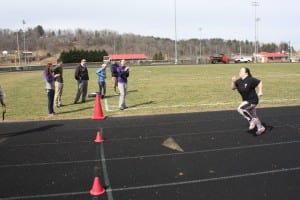 A chilly but sunny Monday morning welcomed the nearly 100 special athletes and probably an equal number of volunteers who gathered to prepare for April’s Special Olympic competition. The jackets and sweaters began to come off as the practice got under way.  Even though it was only a practice the intensity was high and the competition spirited as the morning progressed. The morning was filled with fun and laughter.  High fives, hugs, and “good job” permeated the atmosphere as the athletes beamed with pride not only at their own successes, but also for the achievements of the other athletes.

The Special Olympics is a competition in every sense of the word, but it is also one in which there are no losers.  Every participant is a winner rewarded with medals for their accomplishment in the events of the day. 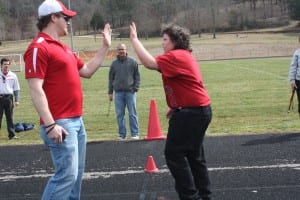 takes at least 15 committees (volunteers) to organize and stage the Far West Regional competition.  In addition to these committees, an army of volunteers and additional support is required.  Judges, timers and coaches are just a few of the many people needed.  The volunteer ranks always have openings for people who have a heart to help in this endeavor. The North Carolina Special Olympics website quotes St. Francis of Assisi, who said very simply, “It is in giving that one receives.”

Each coach must recite the following oath at the opening ceremony of the Special Olympics: “In the name of all coaches and in the spirit of sportsmanship, I promise that we will act professionally, respect others, and ensure a positive experience for all.  I promise to provide quality sports and training opportunities in a safe environment for all athletes.” 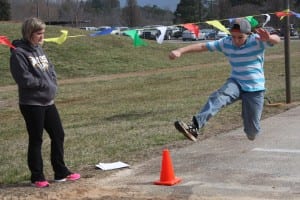 The Far West Regional Special Olympics will be held Friday, April 22, at Robbinsville High School.  The opening ceremonies are scheduled to begin at 9:45 a.m., with the athletic events to kick off at 10:15 a.m.