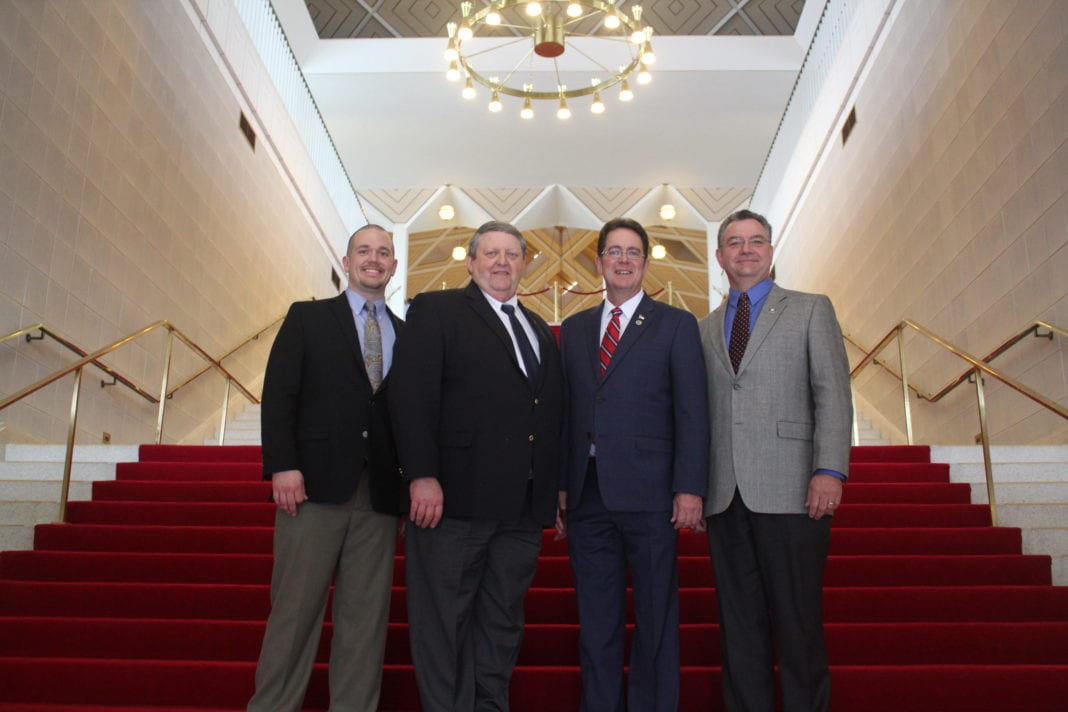 Every two years, NCACC members engage in a process to determine the legislative goals it should seek in the best interest of the counties. The NCACC goals-setting process begins in August of each even-numbered year and consists of five stages, beginning with the solicitation of proposals from counties and ending with the adoption of the legislative agenda at the Legislative Goals Conference.

“There are 100 counties in North Carolina and 82 were present at this conference,” said Shields, who attended the conference for the first time. “To see a body of individuals and leadership move through a process where the end result is that a packet of goals are voted on in a professional manner to present to our legislatures. Even in debate and disagreement, all members spoke in a respectful manner to each other and clarified their rhyme and reason. Disagreements were based on the ‘issue’ not ‘personal’ toward another member or group.” 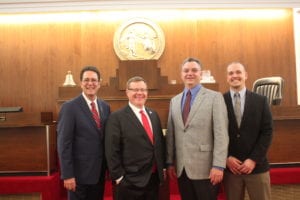 For Gillespie, a freshman member of the Macon County Board of Commissioners, the conference served as an opportunity to see how county governments function from across the state.

Beale, who serves as the vice chair for the Macon County Board of Commissioners and a past president of the NCACC, believes Macon’s involvement in the legislative goals conference is crucial.

“It very important to be involved at this level since there is a very good chance a large number of these goals will become law if passed by the legislature and signed by the governor and anything that passes in Raleigh will affect Macon County,” said Beale. “This year, Macon County presented a goal to support legislation to align oversight standards for lawful body piercing and strengthen unlawful tattooing in an effort to curtail the ever growing problem of hepatitis and other blood borne diseases that have become a major problem in our state.This goal passed unanimously and has support in both the House and Senate. The NCACC is the most powerful voice in Raleigh when fighting for what is right for all 100 counties. The NCACC will do all they can to protect counties’ ability to govern as they see fit. This alone is enough reason to be involved.”

The legislative goal surrounding unlawful body piercing and tattooing started in Macon County earlier this year when the Board of Health presented the issue to the commissioners. The health department has worked to shut down unlawful tattooing in Macon County and noted that the health risks were on the rise, with WNC residents especially at risk. Asking for help lobbying the state, the Macon board presented the goal, which is moving into the legislation for the laws to change, and all that started in Macon County.

“The NCACC is a collective voice and each county has an opportunity to give input,” said Shields. “If Macon County chooses not be a part of the total organization, then we would not have a voice and we would be allowing others to make decisions for us and N.C. has different geographical needs.  Western North Carolina is a lot different, for example, than the coast and if you choose not to participate and share your concerns, your differences will go unaddressed. What I observed was that members were very open-minded and worked hard to understand geographical issues.”

In addition to addressing concerns for body piercing and tattooing, Beale noted that of the 25 goals passed by the NCACC, several stand to have significant impact for Macon County residents.

“There were 25 goals passed this session and of these, the ones that pertain to Macon County in some form or stand to have a direct impact on Macon County include:

A. Support Increased state funding for behavioral health services and facilities at the state and local level.

B. Support Medicaid reimbursement to EMS for behavioral health transport to crisis centers

Gillespie agreed with Beale and noted that addressing behavioral health is a priority across the state, especially in Macon County.

“Funding for Mental Health & Substance Abuse,” was one of the goals that will inevitably have a direct impact on Maconians,” said Gillespie. “The goal to establish a new state-county partnership to address statewide public school capital challenges and support efforts to preserve and expand the existing local revenue base of counties is another of the important goals that were discussed.”

Shields, who has advocated for broadband in WNC since being elected to the board, noted that the NCACC’s goal of moving to expand connectivity will directly impact Macon County.

“I felt a number of goals approved would be beneficial to all 100 counties,” said Shields. “Under general government, the goal to ‘Seek legislation, funding, and other efforts to expand digital infrastructure/broadband capability to the un-served and under-served areas of the state’ is just one of those goals. WNC is challenged geographically, but the six far western counties are making plans for better internet and broadband service.  Under the public education section, the goal to, ‘Support legislation to provide for an overall increase of funding based on average daily memberships outside of the current formula system,’ will help bridge gaps in our local school system’s budget.”