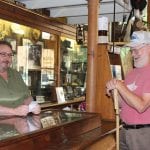 Whether coming to research genealogy, satisfy curiosity or to peruse one of the many historical books, a visitor will find so much more. Director Robert Shook extends a cordial welcome as he encourages sightseers to take a self-guided tour, meandering among the rows of historical artifacts and donated treasures. For those wanting a deeper experience, Shook is happy to accommodate by answering questions and sharing the multi-cultural history within the museum and its array of displays. 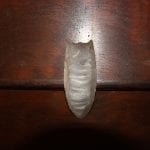 “People are invited to explore the past from the ancient artifacts to what now is Macon County and a lot in between,” said Shook.

There are ghosts there too, and Shook says he just prays and lets them stay in their place.

“They don’t help with the collections or the cleaning,” said Shook.  “So it is a good thing we have our board (of the Macon County Historical Society) and volunteers to help with that and just about everything from greeting to helping with the listings, keeping records of what comes in, and inventorying items whether loaned or donated outright.”

As curator, Shook is often obliged to group items in a manner preserving the integrity of the subject and the donors. At other times, he lets the items “speak” to him. The goal is to capture the interest of visitors and to respect the history of the collections. Shook has been with the museum for almost nine years and was preceded by the late Steve Rice.

Members of the J.R. Pendergrass family were the forerunners of the first store where the current museum is located. The family arrived in the late 1800s, and the elder Pendergrass built his dry-goods store. His professions included storekeeper, Baptist minister and school superintendent. The original store was torn down after a fire, and the existing store was built in 1904.

“J.R.’s son Broadie and his wife Dess took over and continued 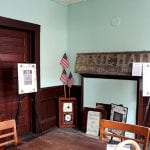 operating the store until the mid-1970s, and it was pretty much original like it is,” said Shook.  “There are seven rooms above us, and the family lived on the third floor. So, there was no excuse to be late for work.”

They closed the store and retired in the late 1970s. After a long restoration process, it became an art establishment called The Gum Gallery under the ownership of Charles Sill and his son John in 1976. The Sills family operated it for some time. 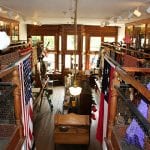 The Macon County Historical Society purchased the building in 1988 and established the museum in 1989. Still recognized as the Pendergrass Building, painstaking efforts have been undertaken to maintain its authenticity, and it is on the National Register of Historic Places. Some of the distinct features include the original plank floor, the distinctive woodwork, large twin counters made from yellow heart pine, the cast iron front and the suspended mezzanine. According to Shook, it has been a work in progress ever since its acquisition.

Shook highlights a factual account of the Civil War that happened in front of the Pendergrass building.

A tour of sorts 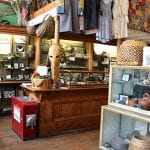 Within the museum, beginning on the left-hand side are native artifacts. Then the fourth display depicts the history of Macon County. In chronological sequence following the wall, visitors encounter the Trail of Tears, the Civil War and the Spanish American War. It picks back up on the far right-hand corner moving toward the front with World War I, World War II, Korean War, Vietnam War and early Franklin.

“Those who forget history are bound to repeat it,” said Shook, emphasizing the applicability of this common saying. 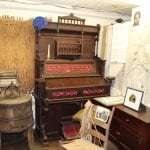 Upstairs in the mezzanine are woven blankets, quilts, and original and reproduction period costumes. Other authentic items include sports gear, the clock once housed in the old courthouse clock tower, and an organ Mrs. R.B. Hyatt played in her home for Billy Graham in 1950 when Graham was in town for a crusade.

“Actually to be quite honest, they (second floor displays) were all started by what I could find,” said Shook. “When I came here, the upstairs was not glassed in. Once we put the lockable doors on, I could put a lot of things from upstairs (third floor) that were never on display.”

Shook says every display pretty much tells its own story, but he highlighted a few notables.

Buddy Ebsen, best known for his role as Jed Clampett in the television series the “Beverly Hillbillies,” grew up in Cowee. He taught dance in the Cowee community.

Eddie Ray grew up in Franklin, but he moved away and made it big in the music business. He worked with people like Fats Domino, Ricky Nelson and Dolly Parton. Later, he became president of the North Carolina Music Hall of Fame and Museum in Raleigh.

Cherokee artifacts, including pottery, baskets, stone tools and pipes, continue to draw great attention from visitors, along with beautiful, hand-made baskets by Rowena Bradley and baskets donated by area families.

“We have an Eastern fluted Clovis Point,” said Shook of one of the stone tools. “It is one of the oldest points known and could have been used by cave men, hunting the wooly mammoth. They date them by the shape and the time period.”

The Clovis Points were more common in Clovis, N.M., and it is believed that these prehistoric projectile tools were used by native peoples of North America 10,000 to 13,500 years ago. 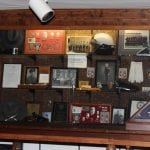 Also included among the collections are pictures of most of the county sheriffs going back from the 1840s forward to Robert Holland along with a few backstories and pictures. Moonshining was a big thing back in the day. In 1960, a still was found and destroyed by Sheriff Harry Thomas. And it would have been a big operation. It had about 1,800 gallons of mash (fermented corn). The pictured deputy destroyed it with dynamite.

“Once you hear them and you kind of get excited about it, you remember them,” said Shook. “You’ve got to be interested in something.” 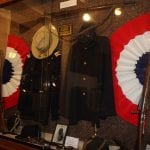 Jim Hawkins donated a great many of the military weapons to the museum. Hawkins is a disabled veteran and the only survivor of a helicopter crash in the post-Vietnam contra wars. Hawkins also secured a rare find – the purchase of several prop coats that were actually used in movies. The Universal and Twentieth Century Fox studios tags remain in the back of these high quality, detailed reproductions.

The Bulgin family contributed a variety of things, including the old surgical kit from their ancestor Dr. A.C. Brabson. The Bulgins were fourth-generation blacksmiths in Macon County. John had the Bulgin forge which his son recently sold. Before the sale, they built the bars for the back of the museum.

“John and his son Randolph kept the clock running in the clock tower for many years,” said Shook. They were both members of the Franklin Fire Department.”

Shook emphasized that children are welcome and should be brought in by their families. Young people are especially encouraged to become involved in learning and preserving history at the museum.

“The sad part is either the state or federal curriculum really bypass history,” said Shook. “So, I hope it comes back.”

The good news is that of the roughly 10,000 people who visit the museum each year, a sizeable portion of that number are students on field trips. He feels we need more advocates and is glad to know there are people like Macon Middle School history teacher Greg Clark who promotes as much as one person can.

“It’s worth it to hear the ‘oohs’ and ‘ahs’ from the children who live right here as they experience history here, yet did not know what went before them,” said Shook.

Visitor Kimberly from Florida came in with her four children ranging in age from two to nine and believes parents have to step up to supplement their children’s knowledge. She has been on a road trip to several states and takes them to museums in each state. The family rented a cabin in the Franklin area for a week and a half and had planned a trip to the museum.

“Children are never too young for museums,” said Kimberly. “I have driven them to over 100 museums on this trip. They get in here, they’re all wide-eyed – they’re obviously fascinated. This is how they can learn how it used to be, what used to be, and it’s hands-on. You give them something hands-on, they’re going to better understand it. My 2-year old probably can tell you more than most 10-year olds can tell you.

She recommends more hands-on activities for children and making sure some “stuff’s up high.”

Elfy Amaya, a businesswoman and AutismSpeaks Ambassador, and William Berrios, a well-known abstract painter are both from Morazan, El Salvador, but now reside in Gettysburg, Pa. They were visiting Franklin for Drake Software classes.

“We always have in our checklist to visit a museum everywhere we travel,” said Amaya. “We love history and culture and love to share with others about it.”

“I come to museums because they are lovely,” said Robin Ziszewski, originally from Detroit and now in Franklin County, Florida.

“I go to historical museums because they are exciting and they remind you of things and tell you about things that you can link to your past and your present,” said Rebecca Lewis, visiting from Michigan with husband Mark. “It brings your family together and brings people together – camaraderie and all.”

The future of the museum

Shook encourages people to consider the museum when preparing for estate matters, recalling that people often discard memorabilia and artifacts that would have value to a museum. Also when estate planning, as a 501(c)3 non-profit, the museum would benefit greatly from any contributions.

These contributions may help with future plans to partner with the toy museum, Down Memory Lane, presently at the Cowee School and the Women’s History Trail that have plans in the works to have offices on the third floor of the historical museum.

The toy museum has an extensive collection of rare and unique items of interest to all ages, and the Women’s History Trail will bring more awareness to the remarkable women who have made a mark and their stories that need to be told.

“The goal is the same – to promote history,” said Shook.

The Macon County Historical Society, a 501(c)3 non-profit organization, invites all Macon County residents to become members and “to assist in locating historical sites, artifacts and documents which should be preserved.”

Many hornets and bees are actually wasps