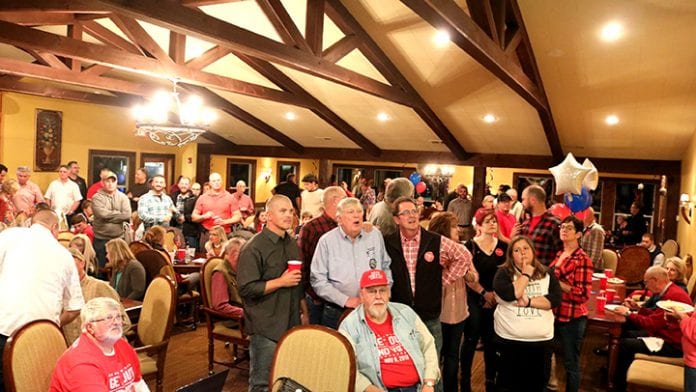 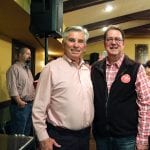 Macon County Register of Deeds Todd Raby peered nervously around a corner at a wall projection of real-time campaign results Tuesday night at the Board of Elections office in the Macon County Courthouse. Then he sat down. Then he stood up. Then he paced. With each printed handout from Board of Elections officials, the lone candidate keeping the tradition of watching from the elections office maintained a slight smile, but a nervous brow did not dissipate until the final printout at 9:47 p.m.

“A little closer in this one,” said Raby after a sigh of relief when the votes were tallied. “I think it was partly to do with straight ticket voting. In an election, you never know what to expect, but I am thankful that the majority of voters had the faith in me.”

Incumbent Democrats in Macon County held onto their seats by the skin of their teeth, while incumbent Republicans, including Sheriff Robert Holland, Rep. Kevin Corbin and U.S. House Rep. Mark Meadows cruised to victories with 63 percent of the vote or more.

“Is it congratulations? Has Cowee reported?” he asked when called for comment. “It was a very close election, a very narrow win, but I will continue – no matter if they voted for me or not – I will work hard as I’ve tried to do for the past 12 years for all Maconians. I really appreciate all those who came out to vote.”

The only Republican-held seat that appeared tight early on in an efficiently run, two-hour election counting process, was the NC State Senate District 50 contest between incumbent Republican Jim Davis and Franklin High School teacher and Democratic contender Bobby Kuppers. Davis always maintained a lead as votes were counted, but the margin was just a thousand votes for the first hour as precincts arrived one by one with memory cards to upload.

Sen. Davis then pulled away, winning 8,764 votes to Kuppers’ 6,538 votes in a historic midterm election that drew out more than half of registered voters in Macon County.

In constitutional amendment voting, Macon County residents mirrored statewide results to protect Carolinians’ right to hunt and fish, to strengthen victims’ rights, to limit the state income tax rate to no more than 7.0% and to require a photo ID to vote. Local and statewide voters opposed establishing a judicial merit commission and a bipartisan ethics and elections board, both amendments Democratic Gov. Roy Cooper fought unsuccessfully to keep off the ballot.

“It was a big turnout on both sides,” said Rep. Kevin Corbin, who won his first reelection bid with stronger margins than in his freshman race, topping rival Aaron Martin by nearly 45 percentage points. But the night wasn’t all good news for North Carolina Republicans.

“It looks like we lost our super majority, but we maintained our majority in the house. It’s going to force us to work with Gov. Cooper a little closer.”

Corbin acknowledged that losing the super majority means the governor will have more power to influence legislation, as North Carolina Republicans will no longer be able to override a gubernatorial veto.

“I think it’s a reality check for both parties,” said Corbin, speculating about the impact of this election across the board. “I think it’s going to [mean] a little more collaboration between the parties and more negotiation and trying to get along.”

Macon County Board of Commissioners, District 2