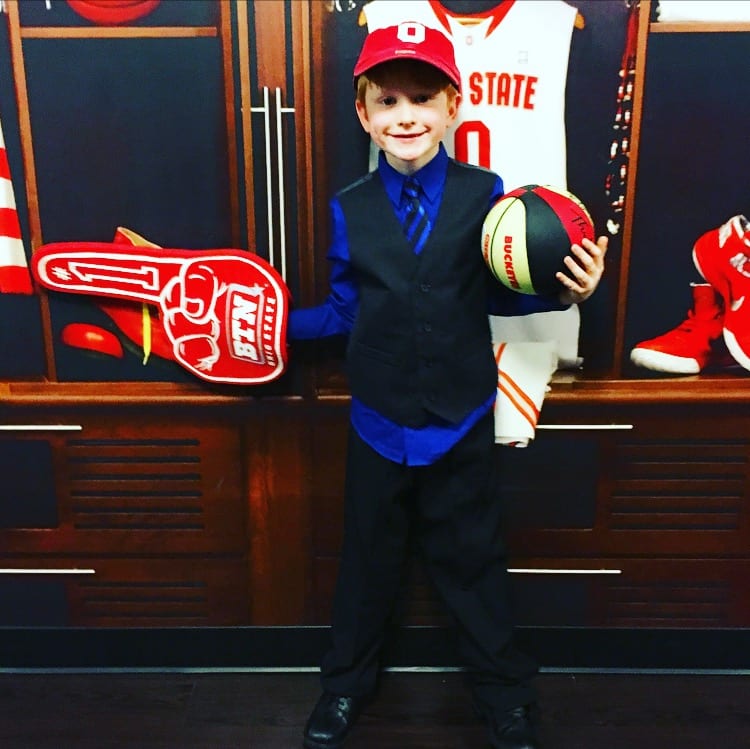 For the first time since October, seven-year-old Ashton Zari will be able to lay his head down in his own bed in Macon County this weekend. After months at the Ronald McDonald House in Columbus, Ohio, under the care of doctors for chronic kidney disease, Ashton will get to spend a few weeks at home.

“We haven’t had our family under our roof in over three months and I absolutely can’t wait,” said Amanda Zari, Ashton’s mom. Amanda has been in Ohio with Ashton, while Anthony, Ashton’s dad who serves as an SRO for the Macon County Sheriff’s Office, has stayed in Macon County to work. “Ashton desperately wants to love on his dog, play with his sister, and spend time with his dad. Even though the Ronald McDonald House is a home away from home, we can’t wait to be in Franklin with our people, in our town!”

Ashton was discharged from the hospital on Wednesday, and will be arriving home on Friday around noon. The Macon County Sheriff’s Office Ladies Auxiliary is organizing a homecoming celebration as big as Ashton’s heart, which has been dedicated to giving back to people and organizations helping along the way during his journey.

When the Zari family reaches the Macon County line, they will be escorted to Main Street with a police escort, and the ladies auxiliary is asking members of the public to help greet the family along Main Street in Franklin. Members of the community who can be on Main Street around noon are encouraged to help welcome the family home with signs and posters.

Despite receiving negative news throughout the last three months regarding Ashton’s treatment, Ashton has remained resilient. From raising more than $5,000 in honor of his seventh birthday to sponsoring a room at the Ronald McDonald House for families in the future, to helping out Ohio State Coach Matta win the Infiniti Coaches’ Charity Challenge, Ashton has made the decision to focus his energy on helping others, rather than dwelling on what has him in his current position.

In the Infiniti Coaches’ Charity Challenge, 48 different NCAA Coaches are all competing vigorously for the grand prize of $100,000 awarded to their selected charity. Coach Matta has once again selected Ronald McDonald House Charities of Central Ohio (RMHC) as his charity for the year 2017! He has been a supporter of the RMHC for many years and is excited to help keep families close. Ashton has launched his own campaign for Coach Matta and has been asking friends and family, as well as being the RMHC’s campaign spokesperson to win the challenge. To support Ashton and the challenge, vote now through March 11 at www.votecoachmatta.com. You can vote every day and urge your family, friends and coworkers to do the same. Voting is simple and $100,000 can provide 1,000 nights of rest, meals and togetherness for families of seriously ill children, just like Ashton.

Although Ashton will get to spend a few weeks at home, his homecoming will be short lived. He will soon be returning to Ohio for more care.

As it stands, Ashton is currently off the transplant list for a new kidney. According to his mother, his creatine number is better now than it was three months ago, but other factors have lead to him being removed from the transplant list.

“They are changing the focus of his treatment to getting the urinary tract stable,” said Amanda. “His bladder continues to grow. His capacity is up to 840 mls. He will have a series of testing over the next three months to determine what course of action is plausible. He is the only child they have ever seen with such intense structural damage.They have also diagnosed him with general bowel and bladder dysfunction, because they don’t know what else to call it.”

Ashton has a tethered spinal cord, which is contributing to the doctor’s altered treatment plan.

“The tether is not affecting his bowel and bladder, therefore until he loses sensation in his feet we are playing a waiting game,” explained Amanda. “Long story short, the doctors are at a loss and we are back to the drawing board. If they don’t get his urinary system stable he will never be a good candidate for a transplant.”

Ashton will be in and out of Columbus over the next three months formulating a treatment plan. Ashton is  working with urology, nephrology, and GI to come up with that treatment plan.