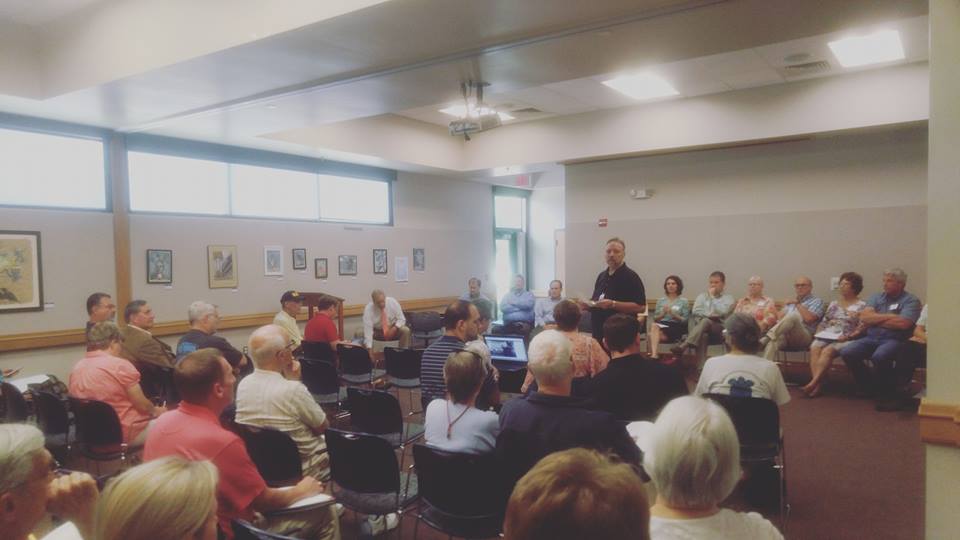 It was standing room only in the meeting room at the Macon County Public Library on Monday afternoon for a community meeting regarding broadband in Western North Carolina. The discussion on bringing more broadband internet options to Macon, Jackson, and Swain counties continues to be a major topic for area residents and government officials, promoting the library to host an informational session on Monday, bringing many of the major players around the same table.

Vendors, government officials and others spoke to a crowded meeting room about what each of their business or organizations are doing to further broadband in the region and what work still needs to be done.

“Broadband” is defined as 25mbps (megabits per second) download speed as a minimum. Most of rural America, which is by definition, Western North Carolina, is without connectivity.

The FCC recently found that nearly 40 percent of rural populations lack target levels of speed (25 Mbps for downloads). The cost of doing business in rural areas is most commonly cited as the reason for lack of connectivity. That very reason was repeated several times on Monday, as representatives from Morris Broadband, Balsam-West, and individually owned services all cited high cost due to the geography, space population and customer acquisition as being the major road blocks preventing them from doing business in Macon and surrounding counties.

Economic Development Directors Tommy Jenkins for Macon and Rich Price for Jackson both focused on the importance broadband plays for the local economy and furthering business, but both said realistically, there is little to be done to entice private businesses to operate in rural areas.

Representatives from Morris Broadband noted that typically they look at areas and require more than 16 customers to be located within a square mile before considering bringing service to an area to make it financially feasible. They noted that they look at being able to make a return on investment within five years of servicing an area in terms of cost of infrastructure and getting people connected. In rural areas, there are rarely 16 customers within a mile of each other and it’s nearly impossible to make the money back within that five-year target time.

“You have to understand that in the seven western counties, there are 200,000 potential customers total,” said Sarah Thompson, executive director of Southwest Commissions, a regional economic development effort. “These providers can get 200,000 within a block in some places.”

Thompson is working with the Southwest Commission to develop a comprehensive plan for the region on how to expand broadband and increase connectivity in the seven westernmost points of the state. Thompson noted that they are in the first phase, which is gathering information. That phase will take around a year, and the information and connections made during the process will be tools and resources for each county to see what is best or what steps are next for the counties to further their own broadband options.

The Southwestern Commission is seeking the professional services of a qualified consultant to conduct a Community Broadband Assessment for the seven western counties of North Carolina. Proposals to bid on the project are due by July 6, when the first phase of the project will begin.

Designer adds ‘flare to the square’ for Christmas