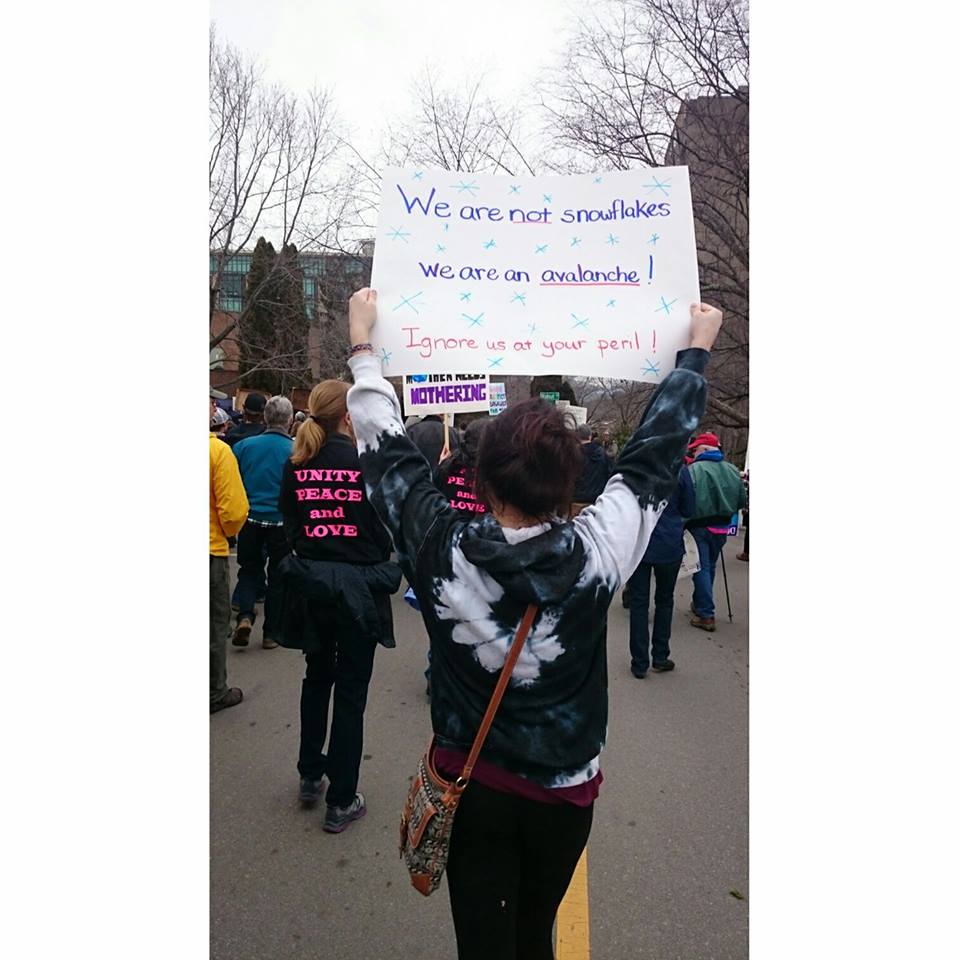 On Saturday, nearly 700 events around the globe, including one in Washington, DC, were held to recognize a global movement known as the “Women’s March.” There were marches held on all seven continents, and more than 500 cities in the United States on Saturday, including in Asheville. Dozens of Franklin residents travelled to Asheville on Saturday to participate in the march, and while the event was dubbed a “Women’s March” the reason residents participated varied.

“When I found out about the March, I knew I had to go,” said Tammy Sigler. “Lucky for me I have an excellent boss … who covered for me. It was emotional. It was empowering. It is motivating. I have been heartsick at the surreal outcome of the presidency. This movement is more powerful than a lot of people are giving it credit for. I am proud to have walked side by side with people of all colors, all races, religions, professions. There were men there, entire families, war veterans, retirees in wheel chairs, one woman was on oxygen. The employees in the businesses stood by the windows cheering us on and waving.”

A lifetime of experience lead Sigler to travel to Asheville with a group of friends from Franklin.

“I marched for many reasons,” she said. “I was given the date rape drug when I was in my early 20s and I had an abortion. I am not proud of it. It hurts my heart still, but it was what I had to do at the time. I am a breast cancer survivor  and was diagnosed at age 30. I had a three-year-old little girl. I was told by my doctor that unless I had the money, they wouldn’t start the treatment. She looked me right in the eyes and said, “If I were you, I would get all my friends to go put collection cans in 7-11s. Come back when you have the funds. I also, once I was able to obtain insurance years later…at quite a cost…that there was a limit to what they would cover, which if the cancer came back, it wouldn’t begin to pay for treatment. So, I marched for many reasons…Women, children, the environment, the rest of the world!”

For 22-year-old Bridget Karcher, the March was about unity, not just for women, but for everyone.

“The March was easily one of the best experiences of my life,” said Karcher. “The displays of love and compassion from such a diverse group of people gave me such hope for our country. Seeing people from all groups protesting peacefully made me proud to live in a country where we are allowed to make our voices heard. As a young woman watching and participating  in this election, I found that I was being attacked with such hate from both sides for speaking my mind. Even though I consider myself to be an educated voter, I found people were putting my voice down  simply because I was a women and a college student. The March provided me with an opportunity to show others that even though we all have different experiences and opinions, we can still voice them without using hate or violence.”

Jennifer Turner-Lynn travelled to Asheville to participate in the march, because to her it was not only her right to do, but an obligation to take a stance.

“I wanted to March because I think it is a fundamentally American right that I personally exercise too infrequently,” said Turner-Lynn. “I marched because I think it’s pretty awesome to celebrate being a woman. And finally, I marched because I am gravely concerned about issues related to education and domestic and sexual violence. I cannot support the administration’s nominee for education secretary and because VAWA is one of the offices on the short list of potential cuts. The experience was beautiful. You felt hope, unity, strength, and empowerment. It was a time of coming together and remembering that we rise by lifting others.”

Franklin resident Pam Collins went a step further than just traveling to Asheville. Instead, she travelled all the way to Washington to march alongside 500,000 other people.

“People were there to march for all kinds of reasons — the environment, the pipeline, women’s rights,” said Collins. “There would be no way to take a picture of the massive amount of people who were there. There were little kids carrying signs, mothers, grandmothers, and men, all marching for their own cause and purpose.”

Collins said her experience in Washington D.C. was surreal and something she will always remember.

“The day before the march we stopped in a gas station and met a women wearing a pink hat. My friend complimented her on her hat and she asked if my friend had one of her own, to which she replied no,” Collins said. “The women took an extra one out of her purse and gave it to my friend. Then she asked me if I had one and I told her I did not. She then took the very hat she was wearing off of her head and handed it to me and told me I was going to need it for the march and that she would just go home that night and make herself another one. I’ll never forget that gesture and I have the hat put up in a special place.”

Town hires its own engineer