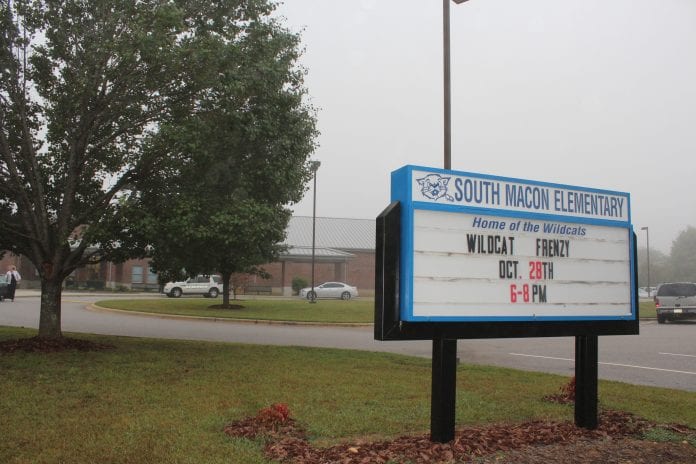 Over the last five years, enrollment in Macon County schools has increased from 4,272 students in the 2012-13 school year to 4,461 today. With nearly 200 more students attending schools in Macon County, schools are reaching near capacity leaving officials to wonder what’s next.

South Macon Elementary is virtually already at full capacity prompting the Macon County Board of Education to approve a new kindergarten position and teacher assistant last week to meet the growth demands.

The 96 students that are attending class at South Macon are currently split between  four kindergarten rooms. That leaves 24 students per class, well above the state limit of 18 students per classroom. To reduce class sizes, the board approved the new position, which would mean five kindergarten classes at South Macon and while a new teacher can be hired, where to put the class is the next question.

South Macon Elementary Allison Guynn said it took some shuffling, but after cleaning out a mail room and rearranging the exceptional children’s classroom, room has been made for the fifth kindergarten room. The $82,000 needed to fund the two new positions will be funded out of the district’s fund balance this year. But the additional classroom is a bandaid on a bigger problem of unsustainable growth in the district.

“With the land available for development and all the growth potential around South Macon, we are only going to continue to grow,” said Guynn.

“South Macon had an Average Daily Membership of 536 students after the first 10 days of school.  If South Macon continues to grow, we would first look at redistricting to better distribute students among our four elementary schools,” said Dr. Baldwin. “Iotla Valley and Cartoogechaye have some room, but East Franklin is near capacity.”

While a maximum capacity at the schools would vary based on each school site, Dr. Baldwin said the district does have to adhere to state classroom size requirements as well as fire codes for the buildings. Enrollment numbers have continued to grow each year over the last five years and soon, a discussion might need to begin to address the growth with additional school sites or additions to the existing elementary schools.

Career Day at MVI provides a snapshot for future opportunities