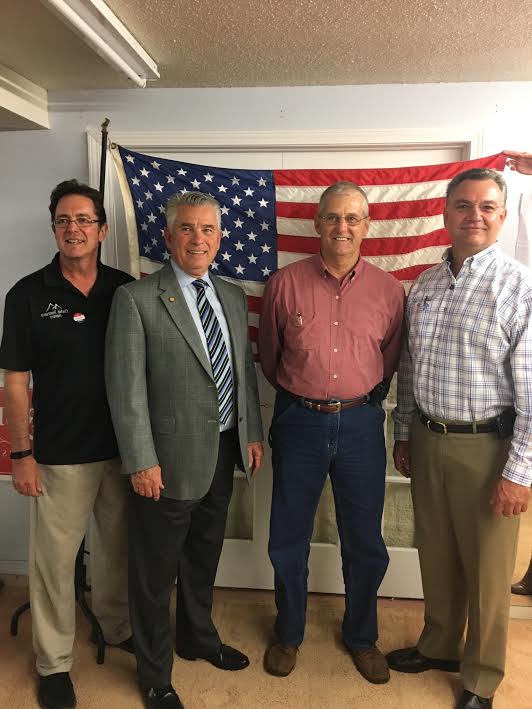 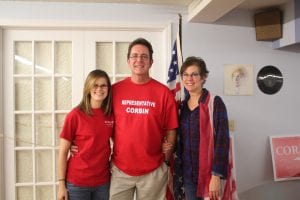 Macon County Board of Education reported a record number of voters in this year’s election, with nearly 50 percent of registered voters in Macon County taking part in early, one-stop voting.

When one stop voting ended on Saturday, 11,182 Maconians had cast their votes, which amounts to 43.5 percent of the county’s 25,702 registered voters. In total, 9,985 ballots were cast at the Board of Elections office in Franklin, and 1,193 voted in Highlands.

“We certainly saw far more voters in one-stop voting this election,” said Gary Dills, member of the Board of Elections. “The last presidential election we saw about 9,000 early voters, so this is definitely a record year for us.”

Macon County voters elected one new commissioner, re-elected an incumbent and helped to send Macon County’s own Kevin Corbin to the North Carolina House of Representatives.

Macon County Board of Commissioners:

Karl Gillespie was appointed to the commission to replace Kevin Corbin for a District II seat with 10,538 votes to Charlie Leatherman’s 6,381.

“Thank you Macon County,” Gillespie said on Tuesday night. “It is very humbling to have this opportunity. I would like to thank Charlie Leatherman for being a great candidate and for the campaign he ran. I will not take the responsibility of commissioner lightly, and will serve all the citizens of Macon County to the best of my ability.”

Incumbent commissioner Paul Higdon retained his seat on the board after securing 10,069 votes to his Democratic challenger Bobby Kuppers’ 6,913.

Kevin Corbin will be going to Raleigh to represent Macon County in House District 120 after securing 12,624 votes in Macon County and winning the district by a margin of 72 percent, the largest margin in any House district on the ballot on Tuesday. Corbin defeated Randy Hogsed, who secured 27.95 percent of the votes cast across Western North Carolina.

“I couldn’t be more excited to be going to Raleigh to represent the citizens of Macon County,” Corbin said on Tuesday night. “I am thankful for Macon County and the voters across the district who cast a vote of confidence for me. I want to thank Roger West for his service and his guidance during this journey. I also want to thank my family and my staff because when I say ‘we’ won this, I truly mean it was a group effort and I couldn’t have done it without their support.”

Corbin said that just like he said while campaigning, education will be one of his primary focuses immediately after taking office. “I want to ensure that public education remains a top priority for the state and we continue working to improve the quality and access to education for all students in North Carolina,” said Corbin.

Senator Jim Davis was elected to office after securing 62.48 percent of the votes in his district compared to his Democratic challenger, Jane Hipps, who received 37.52 percent of the votes. This marks the second time Hipps challenged Davis for the District 50 seat. Davis secured his seat with the help of 10,883 votes from Macon County voters compared to Hipps’ 6,168.

According to Corbin, with Davis and Corbin serving the district in both the House and the Senate, it will mark the first time those two seats are held by Macon County residents since Bob and Jim Carpenter served together in the late ’80s, early ’90s.

Congressman Mark Meadows swept Macon County with 7,645 votes to Swain County Democrat Rick Bryson’s 4,043 votes. Meadows secured another term in Congress across the district with 64.09 percent of the votes cast.

“I often say that I have the best job in the world of representing the people of Western North Carolina, and today, I am overwhelmed with gratitude that the voters of this district placed their confidence in me to continue serving them in Congress. It is a tremendous honor,” Congressman Meadows said in a statement released Tuesday night. “I want to thank all of the volunteers, supporters, staff, and friends who worked extremely hard and dedicated their time and energy to make this possible. I also want to thank those that serve our communities every day–our law enforcement, fire fighters, first responders, school teachers, and our medical personnel. This victory belongs to you. More importantly, my seat in Congress belongs to the people of Western North Carolina. Moving forward, I remain fully committed to fighting for conservative principles and to giving my constituents a voice in their government, regardless of the consequences.”

Governor Pat McCrory received 7,040 votes in Macon County compared to Roy Cooper’s 4,486 votes, but on the state level, the race was too close to call Tuesday night and came down to the difference of a few thousand votes on Wednesday morning. As of Wednesday morning, the N.C. Governor’s race remained too close to officially call. McCrory narrowly trailed Copper by about 4,000 votes. The winner of the governor’s race will likely come down to a canvass of votes which will take place on Nov. 18.

Republican Dan Forest, who made campaign stops in Macon County during the election season secured 7,473 voted in the county compared to Linda Coleman’s 3,836 votes. Statewide, Forest secured his seat as Lt. Governor with 51.87 percent of the votes.

In the presidential race, Macon County voted solidly for the Republican candidate Donald Trump casting 12,035 votes or 68.40 percent, versus 4,841 votes or 27.51 percent for the Democratic candidate Hillary Clinton.