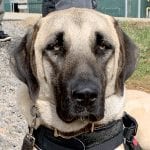 Kristina Masta and her first service dog, Atlas Atticus, were featured Saturday, Nov. 16, on CBS “Dream Team’s Lucky Dog” with animal trainer Brandon McMillan. The CBS segment was filmed a few months ago when the 15-year-old Kristina, a student at Macon Early College, and her mother, Michelle Masta, co-owner of Black Bear Paving & Construction, were in California during a service dog training session with McMillan as well as trainer Mike Herstik.

The 21-minute episode, which can be seen online on the CBS “Lucky Dog” site, conveyed how the young Masta became acquainted with Atlas Atticus, who they call Atlas, an Anatolian shepherd. 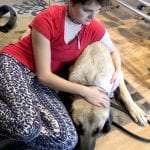 “A family got the dog to guard livestock,” shared McMillan on the show, “but he was too nice.” Atlas was much more of a “lover than a fighter,” shared the narrator. The show included an interview with not only McMillan but Kristina and Michelle Masta.

“Half the game is getting the dog trained,” McMillan told the Mastas. The show features some of Atlas’s training process to get him ready for Kristina.

While the Mastas had owned a chocolate lab as a pet, they needed a service dog to assist Kristina with her depth perception issues due to the circumstances of her birth. Kristina was born prematurely weighing 1 pound, 1 ounce. She developed retinopathy of prematurity, which causes abnormal blood vessels to grow in the retina. While the eye disease can lead to complete blindness, Kristina describes her sight as “looking through wax paper with some small holes in it. You miss lots of stuff.” Mostly, she explained that she is unable to see or detect changes in elevation, curbs, steps, etc.

Michelle began the quest for a service dog for Kristina five years ago, knowing that she would be allowed to have one when she turned 15. The challenge was to find a service dog trained for specific needs and not just as a general guide dog for the blind.

“Kristina’s needs don’t fit into the box,” said Michelle. “To get the right service dog, we had to find someone who was dedicated to training the dog especially for Kristina.”

Michelle searched all over the country and ran into many dead ends.

“Then one day we were watching an episode of ‘Lucky Dog’ and it dinged. I wrote to Brandon, we both did, and earlier this year we had some phone conversations. It turns out that there was a dog that was rescued that he thought would be perfect.”

The Mastas flew to California and Kristina immediately bonded with Atlas. According to American Kennel Club, Anatolian shepherds weigh around 100 pounds or more and are described as “smart, devoted, responsive, and adaptable.”

“He’s big,” said Michelle, “and Kristina is teeny tiny, but we started the training right away and flew back three more trips for about four to five days each trip. The dog had to be trained, but Kristina also had to be trained with the dog. And then Mike came to Franklin over the summer so that he could acclimate Atlas to the school and with Kristina in her daily life.”

The Mastas, natives of Atlanta, Ga., have had a home in Franklin for at least 10 years and three years ago they moved to Franklin full time. For years, Michelle and Kristina have used a designated voice signal, akin to “woohoo” when they became separated. For the last two months since Kristina has had Atlas, “we go into Wal-Mart and I don’t see her,” laughed Michelle. “She’s gone. He’s given her some independence.”

Michelle said the students and staff at Macon Early College have been “so supportive.” She added that she is glad her daughter is at a school of about 160 students versus her former school in Atlanta, where there were about 1,600 students. “The smaller school means there are people looking out for her,” she said.

The challenge is making sure students do not pet Atlas, who walks the halls with Kristina and lies beside her desk. When he has the service vest on, he knows he is working and takes his job seriously to protect Kristina from falls. However, both Michelle and Kristina asserted that at home, when the vest comes off, Atlas is a playful 2-year-old who enjoys running around the yard and rolling over on his back to get his stomach rubbed.

Michelle said she hopes the ‘Lucky Dog’ episode and Kristina and Atlas’s story will raise awareness of the need for service dogs trained to meet specific needs. “There’s definitely a gap,” she said. “Not all people with disabilities fit into a box. It was frustrating and I felt helpless for a while because I wanted the best for my child, to provide her with a specialized service dog. But there just wasn’t one out there for her, or a trainer that we could find to be able to train a dog for her, until we found Brandon, Mike, and Atlas.” 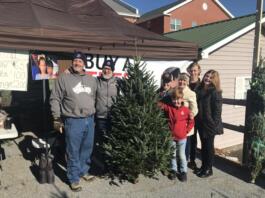 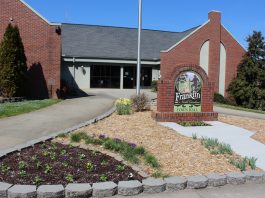 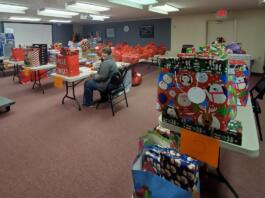