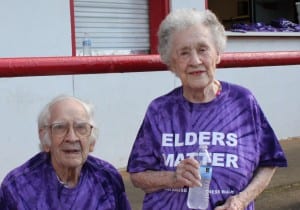 For 97 years, John Littlefield Crawford lived a life of love, service, and community. Crawford passed away on March 30 and leaves behind a legacy that will remain unmatched for all of eternity.

“John L. Crawford is an icon to Macon County,” said Macon County Commissioner and fellow veteran Gary Shields. “The passing of Mr. Crawford has left a huge hole in our community and no one person will be able to fill it.  As a veteran, I can say that Mr. Crawford attended all veteran events from the Veterans Memorial Park, the Salute to Veterans on the football field at Franklin High School and all veteran events at the Gazebo.  His story of how to stay awake by pulling on your earlobe always intrigued me and since this, I have tried it and it seemed to work.  But, when all is said and done, he was a ‘candy man’ to everyone.”

Crawford was a native of Macon County and spent his entire life finding ways to give back to his community. Crawford and his bride of 74 years, Dorothy Rose Crawford, dedicated their time and efforts into shaping Macon County into a place for future generations to thrive. The pair met at UNC Chapel Hill where Crawford was in school. They later married on March 12, 1942, in Victoria, Texas where Crawford was a World War II pilot in the United States Army Corps.

Crawford was in Goodfellow Field, San Angelo, Texas, on Pearl Harbor Day in flight training. He graduated from basic training and went on to advanced flight training to be a pilot for fighter planes. After receiving his wings, he was commissioned as a 2nd Lt. in the Army. Crawford became a training pilot for future American pilots as well as allied pilots from Turkey, Bolivia, Peru, and France. A member of the “Greatest Generation,” he helped close Moore Field following the end of WW II and was discharged from active duty. He remained active in the Army Air Corp Reserves and later the U.S. Air Force Reserves until retiring from the reserves as a Lieutenant Colonel in 1969.

“Mr. John Crawford was many things, among them a decorated veteran of WWII, volunteered in many organizations to help others,” said Commissioner Ronnie Beale. “But the one thing that stands out is the beautiful partnership between Mr. Crawford and his lovely wife Dorothy by working side by side for many decades they invested their heart into our community to improve the quality of life for all. I am not sure we ever see another partnership such as the one of John and Dot Crawford.

I also have to mention Mr. Crawford was our mailman when I was growing up on Cullasaja. He always had a piece of candy or bubblegum for the kids on his route. He continued that tradition for 55 years every time I saw him. John Crawford will be sorely missed but leaves behind a legacy like no other. Our thoughts and prayers are with Ms. Dorothy and the Family.”

At the end of the war, Crawford and his bride returned to Franklin and began a life of community service. While working for his step father at Franklin Hardware, he also became a permanent letter carrier for the United States Postal Service in 1956. He served as a letter carrier until his retirement in 1984. Crawford’s long list of community service efforts include a member of the Lion’s Club, the Masonic Lodge, Chamber of Commerce, Director of the Bank of Franklin, which later became First Union, a member of the volunteer fire department and a charter member of both the Franklin Gem and Mineral Society and the Macon County Cultural Arts Council. One of Crawford’s most prestigious roles, and one he was arguably most proud of, was being Dorothy’s husband. Together, John and Dorothy advocated on the state level for reform in senior services and mental health in the state. In recognition of their tireless efforts for Maconians, the Macon County Senior Services Center was renamed to the Dorothy R. and John L Crawford Senior Center in their honor.

“John Crawford was in icon in this community,” said Macon County Commission Chair Kevin Corbin. “Growing up here, I never remember not knowing John.  What an inspiration he was.  He was involved in so much along with Ms. Dorothy who is certainly an icon herself. John drove a car until just the last few months when he voluntarily gave up his license. I remember John selling poppies on Main Street. I remember John taking a little bite to go after every reception … he was frugal that way!  I remember John as a mentor in many ways. I remember John telling me in 2012 that I was ‘too fat’ and I have since lost 70 pounds! Thanks John for the inspiration. I remember John and Dorothy coming to Appalachian State for my college graduation.  My mom had just died and they wanted to be there for me.  I remember John asking me prior to every election for me, ‘Hey Corb, bring me a sign for my yard.  Now, not one of those little signs.  I want one that people can see.  Bring me a big one.’   And I did.  John Crawford was a war hero.  John Crawford and Dorothy have been an example of what marriage should be.  John Crawford was awesome. This community will miss him. There will never be another one like him.”