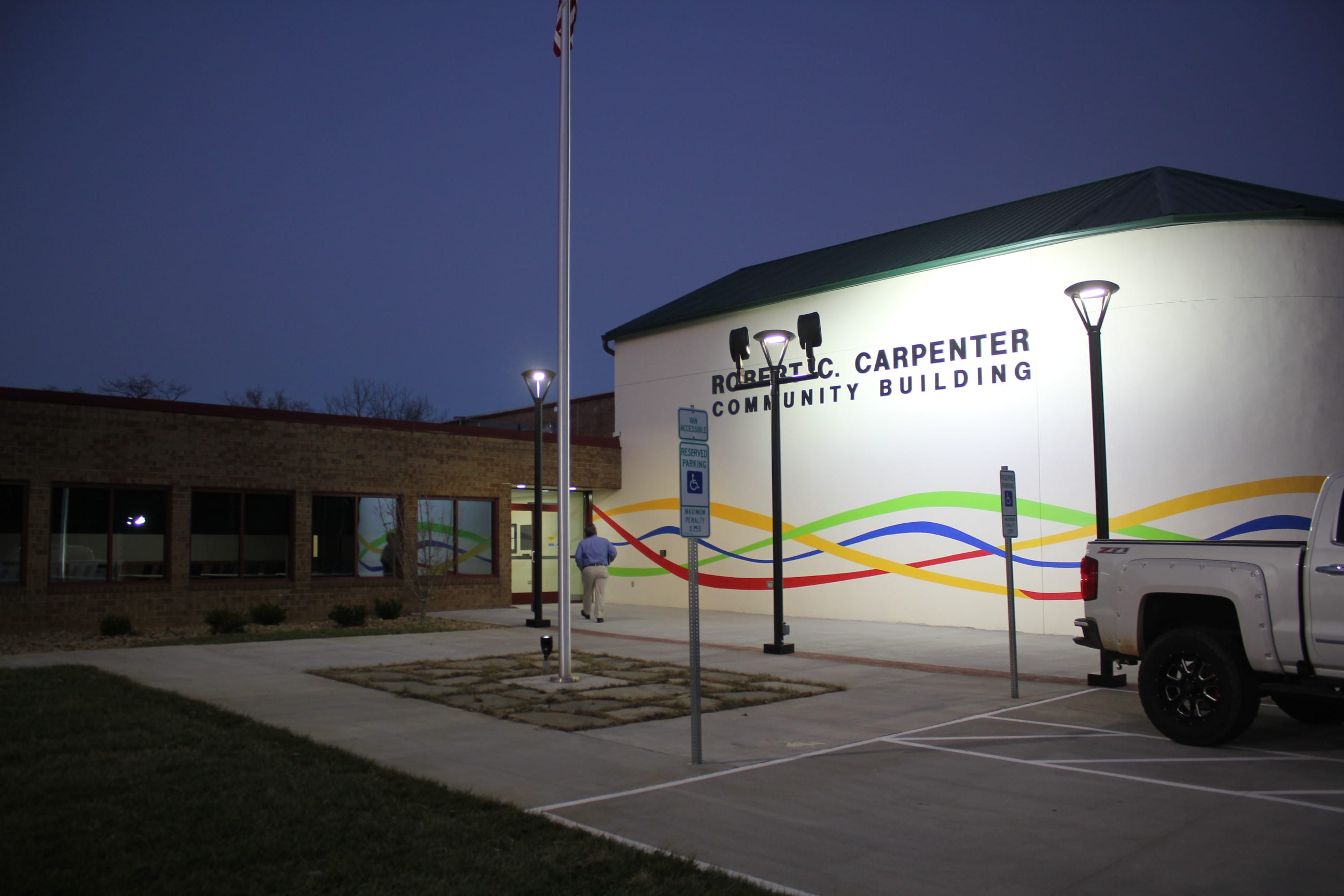 With officials in the towns of Franklin and Highlands, and in county government all working year-round, the respective boards have had a long standing tradition of meeting three times a year to share ideas, accomplishments, and struggles as a way to foster communication and utilize shared resources to best serve the residents of Macon County.

Each board takes a turn hosting the meeting and for the last meeting of 2017, Macon County Board of Commissioners hosted the joint meeting at the newly renovated Robert C. Carpenter Community Building. Each board took turns giving a “year-in-review” summary highlighting major infrastructure accomplishments, financial struggles with unexpected natural disasters, and shared goals looking toward 2018.

Macon County Commission Chairman Jim Tate was the first of the three organizations to address the group, beginning the 2017 highlights with upgrades to the building in which the group was meeting, the Robert C. Carpenter community building.

“This project is representative of the county commission’s commitment to our future through enhancing recreational opportunities in Macon County,” said Tate. “In the last few years, we have completed and fully funded $3.7 million for the Parker Meadows Recreation Department in 2015, funded an additional $350,000 to the town of Highlands this year for improvements to the Highlands Recreation Center, and finished the enhancements of this building and grounds for a total of $840,885 for the building and landscaping.”

Tate touted the Robert C. Carpenter project, saying that about 75 percent of the total cost – $602,675.17 – was awarded to local contractors and businesses for services and materials, showing the board’s commitment to keep those tax dollars as local as possible.

The county is working alongside a consulting firm to complete a capital improvement plan (CIP) looking at infrastructure needs countywide. According to Tate, as it stands, all county departments have submitted their capital needs as well as the needs of the school system and Southwestern Community College.

A capital need by definition is a project which has a cost at or above $150,000 and a lifespan of 5 to 10 years.  This can include new construction, renovations, equipment and/or technology.  Upon receipt of the draft CIP in January, the board of commissioners along with staff and consultants will begin discussing project prioritization and evaluate potential funding sources.

“The CIP will allow us to complete those projects which are most needed while not compromising our strong financial position,” said Tate.

“Broadband discussions continue at both the county and regional level,” said Tate. “Our broadband committee members are currently attending a two-day broadband education seminar hosted by the Southwestern Commission at the Southwestern Community College Jackson County Campus. The Economic Development Commission has recently indicated they will make broadband expansion in Macon County a priority for their board as well.”

The Macon County Broadband Committee is scheduled to meet in early December with Keith Conover of the North Carolina Broadband Infrastructure Office to receive an update on progress achieved since the Macon County broadband provider meeting in August.

In terms of the county budget, Tate said that at the halfway point in the year, Macon County is on target with where they need to be.

“Operationally, Macon County’s FY ’17-’18 budget is functioning well,” said Tate. “By fiscal year end we will have accomplished many things which will lead to more efficient and effective service provision including:  New roof on detention center, six new AWD patrol vehicles, upgrades to our information technology network, upgrades to our financial accounting system, introduction of the Macon County Fire Task Force and the beginning stages of an overhaul to our emergency communications system just to name a few.”

Franklin Mayor Bob Scott followed Tate and shared highlights from the town of Franklin, beginning with a successful Solar Eclipse event that saw more than 10,000 people visit Franklin. The mayor said the Eclipse festival was a welcomed addition to the town’s flourishing annual events such as the July 4th event, PumpkinFest, Veterans Day Parade and the two-nights of Winter Wonderland.

Scott also shared with the boards the 2017 highlight of Franklin changing the name of their leaders from aldermen to town council.

“We are also currently conducting a market analysis study on the Whitmire Property with WR-Martin,” said Scott. “The market analysis will be delivered to the town council in February.”

A large infrastructure undertaking, Scott mentioned that construction has officially began on the new Town of Franklin Water Treatment Plant, which has an estimated completion date of Sept. 5, 2018.

Franklin is also exploring alternative parking solutions for downtown Franklin, and plans to try out parallel and angled parking after the new year on a trial basis.

Franklin will also see new sidewalks in the coming months, as Scott said that the town has committed $42,000 to sidewalks along 441 South once the NCDOT project commences and another $52,000 for sidewalks along both sides of Depot Street.

Scott informed local leaders that the town has begun filling out the paperwork for the 2020 US Census.

Highlands Mayor Patrick Taylor began his address to the board by mentioning that Highlands Commissioners Amy Patterson and Donnie Calloway, as well as Mayor Taylor himself, were all elected for another term, all running unopposed. They will be sworn into office during the Highlands Town Board meeting on Dec. 14.

Several of Taylor’s highlights for 2017 were shaped with the spirit of cooperation and assistance from Macon leaders. When Hurricane Irma hit Western North Carolina, the town of Highlands was one of the most devastated areas, despite little media coverage of the disasters.

Taylor thanked the county, specifically Chris Stahl and Warren Cabe for setting up a disaster debris waste station quickly in Highlands while the clean up process was started. Highlands ended up paying more than $250,000 to clear debris and to get the power grid back on for town residents, and were able to cover the expenses through the town of Highlands’ reserve funds.

“We are in the final stages of creating an aerobics room on the first floor, expanding the exercise room on the lower level and replacing windows, doors and flooring,” said Taylor. “It been over 30 years since we did upgrades to the building. The county contribution allowed us to move up the construction schedule instead of doing the upgrades in stages.”

In past years, the county has partnered with the town of Highlands on recreation opportunities such as an ice skating rink and enclosing the Highlands pool. Taylor informed his fellow county leaders that with that help, Highlands was able to hold a swim meet this year, that resulted in Highlands residents being named Junior Olympians and resident Chase Kenter being crowned a world champion swimmer, beating a swimmer from Dubai.

Highlands has committed to continuing recreational opportunities by constructing a skateboard park in the city this coming spring. The project was made possible through a lead donation from Art and Angela Williams, owners of Old Edwards Inn and Spa. Other residents have since supported the project financially.

Like county commissioners, Taylor said Highlands continues to be a leader in improving broadband access for residents. The town is currently designing a broadband network specifically for the town of Highlands by utilizing the services of Wide Open Networks. Depending on the analysis of financial data, Wide Open will be able to build and operate the network for town residents.

Highlands was able to acquire property on Satulah Road to replace the existing 315,000 concrete tank with an 600,000 gallon steel, glass lined tank to improve infrastructure in the town.

Highlands town officials are also anxiously awaiting the December board meeting, because according to Taylor, the Highlands Performing Arts Center will share plans for its $10 million expansion at that time.

Capitalizing on the strong tourist industry of the wine, craft beer, music and arts culture in Highlands and surrounding areas of WNC, Mayor Taylor finished his year highlights by informing board members that Highlands just wrapped up a Wine and Food Festival that he considered to be a huge success for both the town and the outlying businesses.

Highlands in search of a new Town Manager