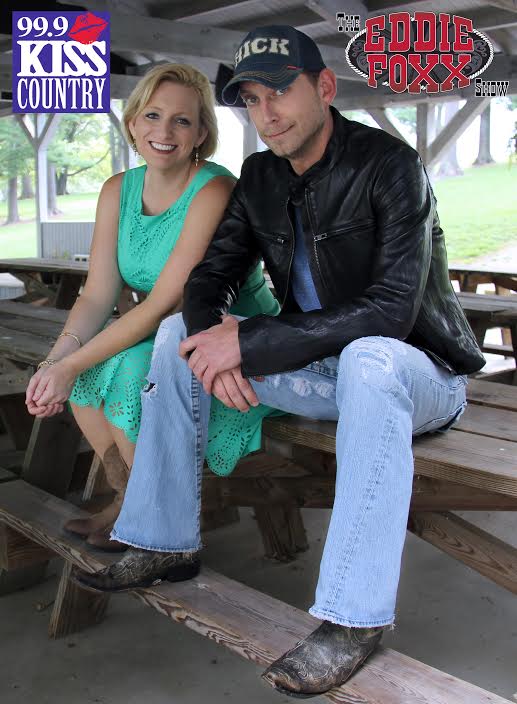 Macon County native Eddie Foxx is no stranger to the limelight. For years, Foxx has made his way into homes across Western North Carolina as a radio personality on 99.9 KISS Country. Recognizing his time and talents, The Country Music Association released its nominees for the 2016 Broadcast Awards earlier this  month and Foxx was stunned to hear his name among the nominees.

“Shock, honestly,” Foxx said of his reaction to learning he was nominated for radio personality of the year for his show, “The Eddie Foxx Show.” “Pure shock. I’m thinking, ‘did they really mean us? Naw! Maybe they just read the thing wrong. Surely they’re talking about someone else.’ Then, very humbled. When you think of all the talented folks across this country doing the same thing we are, it’s humbling to realize your work has been noticed and nominated. But, I ain’t gonna lie. We were so very proud, too. I think Sharon and I both called or texted everyone in our families in less than 10 minutes. All of ’em…just hootin’ and hollerin’! I hate to sound cliché, but it truly is an honor.”

Categories are established by market size based on population. Entries for personality are determined by airchecks, ratings, community involvement and biographical information. Stations are judged on airchecks, ratings history, community involvement and format leadership. In addition, CMA Broadcast Award winners who received trophies in 2015 are not eligible in 2016.

“I get paid to do all the stuff I used to get in trouble for,” Foxx said of his favorite part of being on the radio. “I’ve always been a talker. Always loved to cut up. I just love to make people laugh. Sharon and I get to come in and play every single morning. Real life is hard! If we can help folks forget about all that, even if it’s just a couple of minutes, we’ve done our job. Another huge benefit of having a show like ours, and one that we take advantage of every chance we get is helping communities around WNC. We love to give back. Love it! These mountains have been so very good to us, so we want to jump in and help every chance we get. Whether it’s collecting toys with the Marines for Toys For Tots, raising money for the kids at Mission Children’s Hospital or just spreading the word about a bake sale that will help a family who lost everything in a house fire, we love to help the KISS Country family. They are always there for us, we want to be there for them.”

According to Foxx, who never had a backup plan, it was be in radio or bust, he owes much of his success to his home and upbringing in Macon County.

“Macon County has shaped everything about me,” said Foxx. “It made me. From learning the importance of God, family and country, having a good sense of humor to help deal with the day-to-day crazy of this world, to treating other folks with respect and the importance of community. Every fiber of this country boy’s being is the direct result of growing up in Macon County. And I wouldn’t change a thing! I wish more folks could have grown up like I did. My family would treat ’em right and set ’em straight.”

The winners to be notified in mid-October and acknowledged at “The 50th Annual CMA Awards,” Wednesday, Nov. 2, on ABC TV. Hosted again by Brad Paisley and Carrie Underwood, the show originates from Nashville.

“We absolutely could not do what we do, wouldn’t be where we are without the KISS Country family,” said Foxx. “These nominations are as much yours as they are ours. Thank you! We love ya’ll so very much.”

Nominations for Small Market CMA RADIO STATION OF THE YEAR

Overlook Theatre company brings back popular ‘Smoke on the Mountain’

Overlook Theatre bringing Tarzan to the stage this weekend