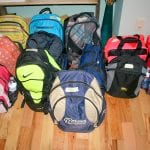 In large cities, homelessness is palpable. In rural towns – not so much. In fact, a common misconception is that homelessness is not an issue in Macon County. Not so, according to Bob Bourke, president of Macon New Beginnings (MNB) in Franklin. In fact, homelessness, or the threat of, is on the rise.

The current and local 2018 numbers speak for themselves: more than 175 people “in prevention,” meaning dire circumstances are propelling them toward homelessness, and 30 “in crisis,” meaning they have no roof over their heads. Throughout the United States, mothers with children are the most at risk. National Center on Family Homelessness reports, “A staggering 2.5 million children are now homeless each year in America. This historic high represents one in every 30 children in the United States.” In Macon County, in 2015, there were 40 homeless children 17 and under; in 2016, 71; in 2017, 94; and, for the first six months of this year so far, 84.

Other at-risk demographics often include veterans and those with mental health and substance abuse issues.

Bourke, his wife, Debbie, MNB board members Kerry Harrington, April Terry, and Leigh Tabor, dedicated volunteers, and countless others in the community are determined to reduce those numbers.

Last year, MNB received 1,167 phone calls pertaining to homelessness or the threat of. Those in need can arrange for an intake appointment with a volunteer. It is during this session that more information about need is determined; plus, every person undergoes a background check. “Whatever issues a person is going through, he or she has to resolve that first so that we can get that off the table,” says Bourke. “If they have an outstanding warrant, for example, or whatever, we have to deal with that first.”

Then MNB and others focus on making sure the applicant has a roof over his or her head. If in crisis, there is a motel room provided for one week. Prevention of homelessness, however, is a goal, so Bourke encourages citizens to contact MNB whenever problems begin. More often than not, MNB will work toward keeping someone in their home or finding a place that is affordable.

“It’s a domino effect,” he points out. “There is a statistic out there indicating many don’t have an extra $500 to take care of a car repair, for example. So if the car can’t be fixed, then the person can’t get to work, and then they can’t pay the electric and water, and then they can’t pay their rent or mortgage. What we want to do is prevent them getting to the point where they lose their home. We want people who are affected to call us and tell us they need help.”

And “offering” help does not mean “doing” for. Bourke makes it clear that resources and connections are presented, including household necessities, personal hygiene items, and gently used clothing, as well as food – through its every Thursday Serving Spoon ministry from 6 to 7:30 p.m. at Franklin’s Memorial Park, Jaycee Building – but applicants must take the initiative. Even child care (Macon Program for Progress), counseling for legal, behavioral, or substance abuse issues, medical assistance (Angel Medical Center’s community care program), food (Care Net), and interview/resume instruction and job listings (NCWorks) is accessible.

“We let them know what’s available and they do the legwork,” says Bourke.

A future goal is to provide life skills and opportunities for individuals and families to get plugged into the community and for the community to embrace, nurture, and encourage in turn.

Bourke admits that helping the homeless was not on his bucket list, or even on his radar. But years ago, he and his wife had the opportunity to help out a young woman who became homeless due to an abusive family member. They realized the need. When they moved to Franklin from Florida in 2010, after having vacationed in the area since 1999, they paid attention to the plight of the homeless and started MNB as a 501(c)(3) non-profit in 2015. All volunteers are employed elsewhere full or part time; no one is paid for helping out with MNB. And, asserts Bourke, there is always need for more volunteers. 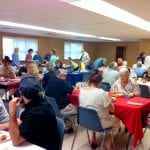 Anyone interested in assisting the homeless should first show up at a Thursday Serving Spoon event to meet people and serve, says Bourke. If still interested, there are many ways to engage, including conducting intake interviews, filling giveaway backpacks with essentials, and donating items to thrift stores.

“People ask me, ‘How can I help?’ We need help writing newsletters, handling finances, writing grants … really the gamut of anything nonprofit related. I learn what volunteers have to offer and focus on their strengths.”

Bourke says that even though he has a full-time job as a Florida certified public accountant, he spends much of his free time devoted to assuring people in need have a home and other essentials because he believes we are to help our fellow man. And, he is encouraged by how so many in the community feel the same way.

“We have a list of landlords willing to work with the homeless. There are churches, businesses, restaurants, policemen, firemen, sheriffs, and so many more,” he says.  “Volunteers, as well as success stories, keep me wanting to be involved.”

As often as he can, Bourke visits those who have been helped by MNB. He remembers when the organization was first started that a man living under a bridge called them on Friday, and by Saturday he was in a home, had a job, and had food and other needs. Recently, a couple, who stayed under a bridge for three months, worked with MNB towards procuring a house, jobs, and a car. “And a man who was living in a tent called us and we were able to connect him with NC Works and he has a job and saved to buy a car. He is now saving for a home.”

Frustrating are the people who choose to live homeless. “But we know who they are and we keep tabs on them to make sure they are okay,” says Bourke, “especially in the winter.”

Although it may not be clear that there is a homelessness problem around Franklin, Highlands, or other small area towns, there is, Bourke assures. The wilderness terrain is effective at hiding those without dwellings. But he insists that this community is doing an excellent job at addressing the issue instead of ignoring it.

For more informationm to donate or schedule an appointment, phone (828)202-3103 or email

Milk and bread sales up ahead of storm