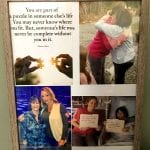 Toward the end of 2018, Franklin resident Pat Cable’s kidney function reached just 8 percent and was days away from having to undergo daily dialysis just to survive. But then she met Shelia Pitts, who was a kidney donor match.

Shelia and her husband Isaac live in Franklin and share two children, Aiden, 10, and Ally, 5. After reading a letter Cable penned titled “B positive,” the blood type she needed for a match, Pitts instantly made the decision to donate her kidney to Cable.

After making the decision, Pitts started the long and trying process to become an organ donor. She willingly drove back and forth to the University of North Carolina Medical Center in Chapel Hill for frequent tests and screenings, blood draws and even a psychiatric evaluation.

Pitts drove to Cable’s house to deliver the good news in person…. Pitts was a match and had been approved for the transplant. Right when she thought she was out of options, the best option drove into her driveway and saved her life.

Kidney disease plagued Cable’s family as she lost both of her parents to the diagnosis. Cable was able to manage kidney disease for years, but the time came to where her only option was a transplant. On Dec. 11, 2018, Pitts and Cable underwent the surgery for the transplant and then started the recovery process in adjoining hotel rooms in Chapel Hill.

A year later, both Pitts and Cable are doing well and reunited to celebrate the one year anniversary of the surgery that added years onto Cable’s life.

“I am doing well now,” said Cable. “I had a rough start from the surgery, I stayed in the hospital two weeks then came home on Christmas Eve last year. Each day I got a bit better, it took more than six months for the recovery process from all the medications to finally taper off.  Recovery at home was better, I had my family to thank for that.”

Life has been different for Cable since surgery.

“I have to be careful from germs, colds, the flu etc. When I go to the hospital each month for labs, I have to always wear a mask,” said Cable. “I have totally changed my diet, I don’t eat as much as I should but I have gained weight but doctors say it’s from the meds. I am going to try and get more physical this year now that I am feeling a bit stronger.”

Despite knowing she was able to avoid daily dialysis and she has bonus years to spend with her loved ones, Cable remains steadfast that the highlight of the surgery was connecting with Pitts.

“She has shown me that there are wonderful people out there that really do care about others,” said Cable. “We have become friends and she is considered family to me. She is like one of my daughters and her children are like my grandchildren.”

Cable and her new “family” celebrated the one year anniversary of the transplant on Dec. 13,  with Pitts’ family, Cable’s family and a few friends.

“I had a beautiful cake donated from Carolina Cake Company for the occasion,” said Cable. “Sara (owner of Carolina Cake Company) was sweet enough to donate it and not charge me. It was important for us to have this celebration as a reminder of how life can be cut short from anyone at anytime. Learning all I could about kidney disease, donations, and the process it takes. I worked so hard for myself to ‘be positive,’ which is what blood type I am. When Sheila saw this, she said that was her motto and she decided to get tested for me.”

Pitts is also continuing her road to recovery.

“All is well on my end,  this past year has flown by,” said Pitts. “After surgery I was back to work after just a few weeks. Healing was pretty quick, it took a little longer to get my energy back but I feel better than ever now. I try to live a healthier lifestyle now than I did before surgery and have lost 60 pounds.

“Seeing Pat out enjoying life spending time with her grandkids and doing things she wasn’t able to do when she was sick means the world to me to know that I was able to make a difference.  I never in a million years thought about kidney donation until I came across Pat’s story on Facebook, but seeing her plea to find a compatible donor pulled at every one of my heart strings.  Something in me thought ‘what if I could help her? What if I was in this situation and I was told I was going to die without getting a new kidney?’  I would only hope and pray that someone would come forward to give me a second chance.  I’m not going to lie, it was scary to think about having surgery taking a risk but the team at UNC in Chapel Hill where the surgery took place answered every question I had and was very informative of everything that would happen before, during, and after surgery. I recently had some lab work done for my yearly check up and everything looks great. The best part of all of this is the friendship that Pat and I share. She has became like a mother to me.  My kids and I adore her and her family.”

Cable said she hopes their story encourages others to get tested and brings awareness to organ donation.

“There are so many people in North Carolina alone waiting on a list for many years to receive a gift of life, from a live donor or a deceased donor,” said Cable. “It is a sad thing for those that wait. So many young children, babies, adults and older adults that are on dialysis awaiting their chance. I happened to be a lucky one. I remained positive during this entire ordeal. I had so much going on in my life at that time, but I continued my journey. If I could tell everyone one thing it would be to consider becoming a donor, a live donor as we only need one kidney to live.”

With a fresh, new outlook on life, Cable said that she doesn’t want to take anything for granted.

“I believe that I was given this chance to fulfill some other purpose,” said Cable. “I am still trying to find that purpose, but each day I put one foot in front of the other, I spend lots of time with my grandchildren who I adore.”

While it has been a year since the transplant, Cable said there is still more recovery she needs and some things she will have to do for the rest of her life.

“My family knows how hard it has been for me since coming home to recover,” said Cable. “Taking the many transplant drugs that I take each day for the rest of my life, at first they were very hard on my system, but have finally calmed down, I don’t have the shakes like I did, the memory loss was the worst as I would see people that I know and couldn’t remember who they were. But it’s getting better  I am so very thankful to Sheila for her act of kindness and love. I hope that others that are in need of a kidney transplant know never to give up, that their day will come. Also I want to thank those that helped with my fundraiser … before my operation. It helped with the cost of hotel stays, food, gas for myself and my donor and her family.  Thank you for the support in my struggle from a few people that were there for me after my surgery.”