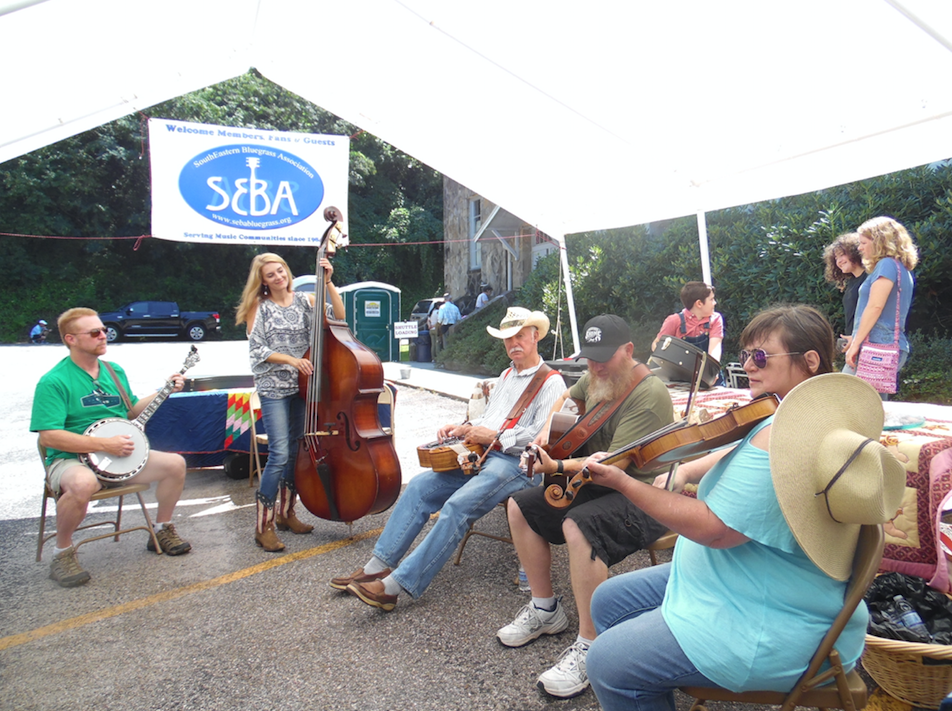 With bluegrass serving as one of the earliest identities of America, spreading across the unsettled terrain as settlers traveled out of North and South Carolina from Jamestown, the SouthEastern Blue Grass Association (SEBA) works to preserve the tradition.

“The Macon County SEBA chapter is an instrumental part of keeping the heritage of the mountains and more specifically bluegrass music alive here in Western North Carolina,” said Jay Baird, vice-president of the local chapter.

The halls of the Cowee School Heritage Center was full of tunes picked by Macon County’s SEBA chapter earlier this month for the 9th annual Franklin Area Folk Festival. The Macon County chapter regularly meets at the heritage center, and plays festivals and events geared toward promoting and preserving southern Appalachian heritage and culture. The Macon County SEBA chapter was started in 2014 with Baird leading the charge.

Baird, who picks a mean guitar and sings with a twang, set out to start a local chapter to bring musicians together and preserve the bluegrass sound.

“Our members are made of both skilled musicians and novices alike including men and women of all ages and various backgrounds, from pastors and salesmen, to  farmers, doctors, lawyers and retirees,” said Baird. “We encourage anyone and everyone to grab an instrument and join in or just come sit a spell and listen to some of the purest music on the planet.”

The Southeastern Bluegrass Association (SEBA) is a nonprofit organization consisting of members, fans, bands, promoters, businesses, vendors, musicians, and friends of bluegrass music. The association has been in operation for more than 33 years and encourages people to work together to reach a common goal: The preservation and promotion of Bluegrass Music, bringing it to the Community through performers, instructors, jam sessions, venues and events and providing information to all through our publications, the Award Winning SEBA Breakdown and the SEBA websites.

There are about a dozen SEBA chapters in Georgia, Tennessee, South Carolina, and Alabama, with the Macon County Chapter being the only chapter located in North Carolina. All the chapters hold regular jam sessions, open to the public and free to participate.

The Macon County chapter meets on the third Saturday of every month at 12 noon at one of several SEBA approved Jam sites. “We play mostly at the old Cowee School or right next door at the historic TM Rickman Store in the summer months and at the old Cullasaja School (now the new Whistle Stop Mall) in the winter months,” said Baird.