It did not take long for Jason Hedrick to realize why people were gathered Tuesday, July 30, under the pavilion at Golf Club at Mill Creek when he came off the golf course from playing his weekly round with Coach Eric Hall and other friends. Local coordinator for Special Olympics Macon County, Jennifer Garrett, learned earlier that week that Hedrick had been selected to compete as a golfer in the Special Olympics National Invitational Games in Nashville, Tenn., Sept. 21-26. Garrett and Jason’s mother, Pat, spread the word that a surprise announcement would take place. Family and friends, many of whom are members of the Mill Creek community, waited for Jason to finish his lesson so they could share in his excitement. 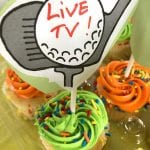 “Live TV!” one of Jason’s favorite sayings, was repeated over and over again as Garrett and Hall shared the news with him. Everyone cheered Jason, 43, who has been intellectually challenged since birth. Hall said, “I am so excited for Jason!”

Hall, who has played regularly at Mill Creek for many years, learned about Jason from his wife, Janie, who had met Jason’s mother Pat at a doctor’s office when she took Jason for an appointment. “God orchestrated Jason and Eric,” stated Pat.

“When I met Jason, I liked him immediately.” Hall had not coached or been what is referred to as a “unified partner” for a Special Olympics athlete; however, he decided to commit to Jason by becoming a certified coach. For almost two years, Hall worked with Jason every Tuesday at the Mill Creek course.

“Every Tuesday night is Jason’s night,” he said. “Several other guys play with us so every Tuesday we call it the Jason Classic. Jason hits it straight … never misses. When he hits a long one he shouts, ‘Bombs for mom!’ The biggest thing about our training for the national games will be to just keep on practicing like we do and for Jason to continue to enjoy playing and not to feel pressure … to just stay comfortable on the course.”

Jason competes in what Garrett explained is 9-holes alternate shot. He and Hall play as partners with only one golf ball, taking turns playing the strokes.

Jason has been playing golf and competing for at least 20 years, explained Pat. When she moved to Franklin a few years ago, she made sure to purchase a home on the Mill Creek golf course so that Jason could enjoy watching the golfers.

“I’m just on cloud nine for him,” said Pat. “Golf has been such a good sport for him, and going to the national games is such an honor.”

Hall and Pat emphasized how supportive Tony and Brenda Munger have been toward Jason. Tony is superintendent at The Golf Club at Mill Creek’, while Brenda is general manager. They hired Jason to be a golf cart attendant.

“The Mungers are so supportive and provide whatever we need,” said Hall.

Tony said Jason is a joy to have at the club. “If everyone was as happy as Jason,” he expressed, “enough said!”

Another encouraging couple at Mill Creek is Bob and Jane Connor. When Jason and Hall attended the state games in Charlotte last year, at which a gold medal was achieved, the Connors – as well as about a dozen others who know Jason – traveled to the city to cheer him on.

“We just love him,” said Bob. “Everybody should have Jason’s disposition. He’s such a genuine man. We went to the state games and we’re planning on going to the national games as well.”

And Mark Ditmeyer, who also showed up at the pavilion to congratulate Jason, said, “He’s so outgoing, and the whole community out here loves him.”

To cover Jason’s expenses traveling to and staying in Nashville for the Special Olympics National Invitational Games, $5,000 will need to be raised. A FirstGiving page for “Team Jason Hedrick” has been established and donations are tax deductible.