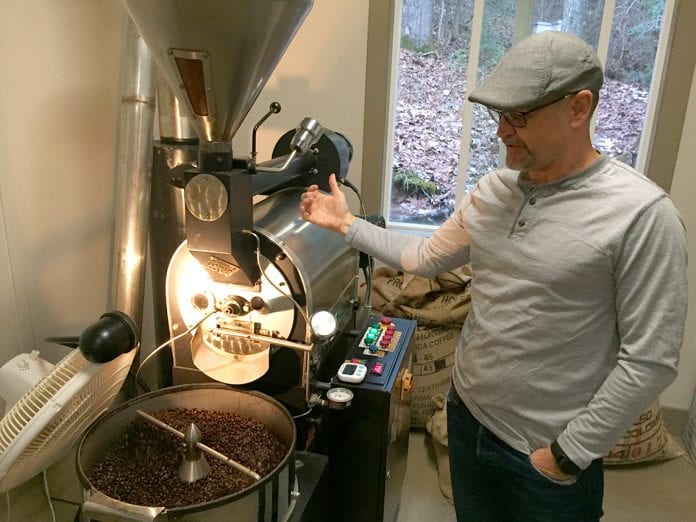 That feeling you get when you hold a warm cup of coffee in your hands in the company of friends, that’s why Shawn Maddox started roasting coffee in his backyard.

“Just the smell of coffee can change somebody’s attitude from being sad to being happy,” said Maddox, 45.

It started about eight years ago when Maddox walked into Espresso News Café in Boone. He breathed in the smell of freshly roasting coffee. He admired the frosted windowpanes. He looked around at people on their laptops, friends talking and groups meeting. It gave him a homey, comfortable feeling.

“I was like, ‘Man, this is what I want to do!” he recalled. “I actually prayed about it. I was praying for a shop.”

He dreamed and he prayed, and time passed. Then, one day, a colleague told him about a friend who had closed his coffee shop in New York and had sold all his equipment except his coffee roaster.

Maddox wasn’t sure, he waited. Eighteen months passed, and the roaster was still available for sale.

Starting a coffee shop would cost upwards of $120,000, with no guarantees of success. He would have to leave his job – it carried enormous risk. So, for about $20,000, he bought the 2009 U.S. Roaster Corporation 5-kilo roaster and built a 12 x 20’ backyard roasting house to get started.

“I kept feeling good about it,” he said. “And if I’m praying about it, you just have to believe that God will take care of the rest.”

After taking online classes and reading about coffee roasting, he made some good, hot coffee. He was ordering quality, 20 to 25-pound bags of organic, fair trade beans from Colombia, Guatemala, Nicaragua, Costa Rica, New Guinea, Indonesia and Ethiopia. But he felt like he needed to know more.

“I drink it, that was about it,” said Maddox about starting out. His degree in sports management from Western Carolina University, seven years in sales and retail in Knoxville, and nine years landscaping at the Cullasaja Club in Highlands hadn’t prepared him for the fine art of coffee roasting.

He joined the Specialty Coffee Association and took a multi-day Level I roaster certification in Virginia that covered the nuances of coffee brewing and extraction. Now he was cooking with gas.

No, literally, Maddox was cooking with gas. Instead of roasting his beans at a constant temperature from start to finish to achieve medium, medium-dark and dark roasts, now he lowers the flame for 45 seconds to a minute to slow down the cooking process, to develop the beans’ internal sugars. Then he increases the flame and raises the temperature to finish. He also learned that his Indonesian beans could take the heat, so he roasts them darker. 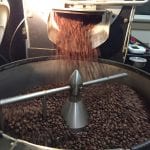 Six years ago, Maddox opened a stand at the Franklin Farmer’s Market. He’s the goateed, fit, 5’9” man with a bright smile and a newsboy cap bagging and selling beans. He percolates his coffee for shoppers to taste, and people have taken notice.

“That is helping to get the quality out there,” said Maddox about trying to develop a market for gourmet coffee in Franklin. “Coffee is very flavorful, you can get a bunch of flavor notes out of it.”

It’s a tough sell to some, his coffee costs about $15 pound, and $9 for a half pound. He doesn’t have industrial roasters running all day long; it’s small batch roasting of premium beans. And he’s hoping a Christmas special, including sample 2-ounce bags for about $3 each, will get more people to try his coffee.

“I tell them that it’s all local, it’s fresh, it’s done once a week and it’s organic,” he said.

Maddox has a few regular customers who buy four to eight pounds of coffee every two weeks, and recently he collaborated with Lazy Hiker brew master Graham Norris on a special coffee milk stout.

He also stocks his coffee at Mountain Valley Health Foods on Highlands Road, serves it at Swoon the Bakery downtown, and perhaps most importantly, his testing ground: at church.

“Dark is good for your brain,” said Doug Kennedy, 61, as he filled a cup of Bali dark roast at Discover Church Sunday morning. “I don’t know. I read it somewhere, it’s supposed to help you focus.”

Kennedy keeps a bag of Starbucks Verona – a blend of Latin American and Indonesian beans – in his kitchen cabinet. He hasn’t made the switch to Madd Ox yet. Former Starbucks barista John Adams, 37, has.

“If someone cares and can tell, they’ll switch,” said Adams. “But you have to keep making it available.”

Maddox found that it’s important to educate his customers on habits like brewing within 30 minutes of grinding the beans and tasting the coffee before they add cream and sugar.

Maddox and his Franklin-raised marketer/bookkeeper wife, D’Anne, believe there is a market for locally roasted coffee in the growing town of Franklin.

Maddox’s mother now lives here, and his mother-in-law lives and works downtown, kindly allowing him to ship pallets of 52-pound coffee sacks to her office for him to pick up and drive the windy road up to his backyard roasting house.

In that little house, decorated with Pittsburgh Steelers stickers is a giant, whirring coffee roaster producing a low, Zen-like hum for hours on end while Maddox hand roasts 40 pounds of beans each week. It’s his quiet time.

He pushes big round buttons, turns dials and pulls a miniature lever from the roasting drum to smell beans: the smoky aroma of Papua New Guinea, the fruity accents of Honduras and the nuttiness of Nicaragua – all part of a new experimental blend he’s been testing with churchgoers and the occasional journalist.

Still, alone in that little house, he dreams about getting his coffee in local restaurants, and what it would be like to have his own coffee shop.

“I’d love for it to be kind of like a ministry coffee shop,” he said, explaining his vision of a place for people in need to go to feel comfortable, to feel a sense of community. “And a place you can go after a date and have a piece of pie and coffee with your spouse.”

He reflected for a moment, then spoke about his brand name, a suggestion from his brother-in-law.