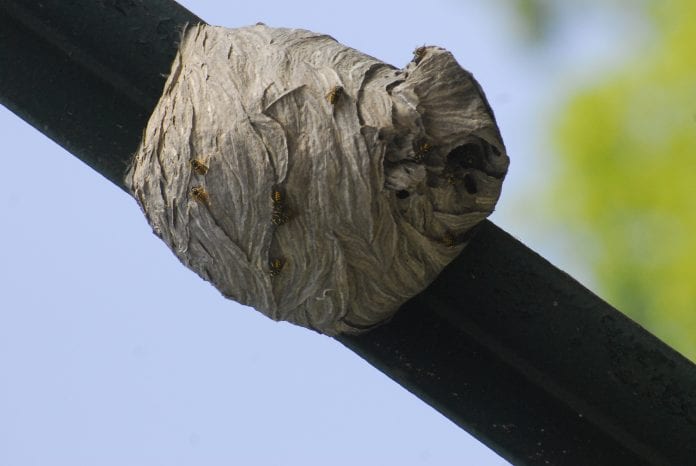 Poking around the yard sometimes produces some surprises. I had intended to prune two tree branches that are in the way. Close to where I wanted to work, I found two hornet nests. My gut reaction was to get rid of the insects and their nests.  I remembered that we have an aerosol can of hornet spray that projects close to 20 feet.  This could make it fairly safe to use without getting stung. Spray can in hand I was armed until I realized that I knew next to nothing about these insects except I had always called them hornets.

Reading about hornets, wasps and bees is like reading about botanicals. The common and scientific names are as confusing, not always descriptive and often overlap.  What I had found in my yard was a nest of the common Bald-faced Hornets which is technically a wasp. There is only one true hornet in North America, the European Hornet, a large non-threatening insect rarely seen.

There are a number of other common names for the Bald-faced Hornet such as White-faced Hornet, White-tailed Hornet, Spruce Wasp, Blackjacket and Bull Wasp. Because of its black and white markings it is described as “piebald” which means patches of two colors. In this case this wasp is black with white markings most noticeably on its face. No matter what it is called it belongs to the wasp family. This wasp is carnivorous as it feeds on other insects such as spiders and caterpillars. In this respect it is beneficial. Also, I learned that there really is no point of killing the colony because all except the queen die over the winter. In fact, the nest is completely abandoned in the winter and is never re-used. Sometimes large abandoned nests are for sale as ornaments. If a nest is located in a troublesome location on your house such as under an eave, doorway or window elimination might be a good idea. These insects do sting if aggravated. So, consider that when you discover a nest in the fall or winter the colony will die.

These are very social insects with an interesting life cycle. A solitary queen having mated in the fall overwinters in a crevice in a rock or tree bark. She chooses a new nest site in the spring and begins laying and tending to her eggs. The hatchlings become workers who can also lay eggs. These wasps are called eusocial as are bees and ants because they work together and have assigned tasks.

The gray papery nest is produced from plant and tree fiber having been chewed and mixed with the insect’s saliva. Inside the gray shell are cells for the larvae that look like those produced by honeybees or paper wasps.

Bees, wasps and hornets are often discussed together. We only have bees and wasps here. The familiar honeybee is the one of the smallest insects in the group. It has body hairs, a receptible on their legs that holds pollen and has a stinger (which is actually an ova-depositor) with barbs that are torn out of its body when used, killing the bee. There are other bees found here all related to one another such as the bumblebees, mason bees and carpenter bees. Carpenter bees are troublesome for people who have exposed exterior wood on their houses. The female bee chews a tunnel in wood where she lays an egg. Mason jar Carpenter bee traps are now available. Also, there is herbal product that can be added to wood paint or stain that repels carpenter bees very effectively.  It is also locally available.

A common wasp seen in this area is the Yellowjacket. It has yellow and brown body markings, is aggressive, and nests underground. Wasps in general have smooth bodies, narrow waists, un-barbed stingers, and most are larger that bees. They can sting multiple times by using its smooth unbarbed stinger. Yellowjackets feed on other insects. Wasps generally are not good pollinators as they lack body hairs.

A larger wasp fairly common here is the Cicada Killer. It has yellow and brown markings. It can sting but rarely does unless very aggregated. It stings and paralyzes a cicada and drags it into a prepared hole in the ground and deposits an egg on the body of the cicada for its larvae to feed upon.  Because of its size it only looks menacing.

It might be good advice to say think twice before using an insecticide. Insecticides are non-selective which means it kills anything and everything it comes in contact with. You might kill something beneficial that is not very threatening. In fact cold weather will kill many colonies.

Karen Lawrence is a professional photographer of botanical subjects and wildlife is from Franklin, N.C.

Attorney General to ‘get answers’ about HCA buyout