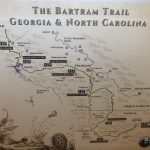 Lamar Marshall, research director for Southeast Heritage, recently shared his in-depth knowledge of Cherokee history, maps, and culture as it relates to Macon County. Marshall delivered a four-part educational lecture and field trip program that began at the Cowee School Arts & Heritage Center. The program was primarily offered to a group of environmental students from North Carolina at Chapel Hill. The program, hosted by the Highlands Biological Station, included guided tours of Cowee and Nikwasi Mounds.

Marshall, who retired from Wild South in 2017, worked for about 10 years with members of the Eastern Band of Cherokee Indians (EBCI) through funding by the Cherokee Preservation Foundation to gather rare archives and historical maps that include various aspects of Macon County’s history.

Highlands Biological Station’s Jason Love said of Marshall’s teaching, “Now and in years’ past, people have been interested in how humans have impacted the landscape of Southern Appalachia.” Love asserted that Marshall’s information provides “richness about this area in terms of Cherokee sacred towns and sites. Lamar has experience in finding sites and mapping them.”

“I just want to see history preserved,” said Marshall, who has been in Franklin since 2007. “Cultural heritage tourism is important to many people who visit this area, and what I share is a part of that.”

Marshall spent more than 50 years in the woods traveling across wilderness areas of the United States navigating with only “map and compass, sun and stars” before the advent of the GPS. He explained that he emulated the Native Americans and mountain men who knew the area by hunting and trapping.

Marshall’s presentation, titled “Excerpts from the Atlas of Cherokee Historical Geography,” offered a brief history of Cowee and Nikwasi towns that existed for centuries before Federal treaties took the land. He explained that the reason the Cherokee people claimed land across several modern states was because of the vast reserves of diverse, natural resources which included buffalo, elk, and salt springs. Native resources also encompassed grasslands in Kentucky and Tennessee as well as mountains and swamps. “Macon County was a stronghold in the heart of the Cherokee homeland surrounded by a fortress of mountains,” said Marshall.

The Cherokee Middle Towns were scattered all along the Little Tennessee River in Macon County. “I spent as much time as I could with my friend and Cherokee speaker Tom Belt,” shared Marshall. “He explained why towns and mounds were located where they were which included east to west valleys that were open towards the rising sun.” [Belt was awarded doctorate of humane letters in May by Western Carolina University.]

“Several important towns like Cowee and Nikwasi were located on major travel ways or trail intersections including trading paths that terminated on the Atlantic coast,” said Marshall. “Different wildlife, native plants, fish, and forageable foods were in each area then – as they are now. Of course, then there were vast food resources and resources for making things.”

Evidence of just how much food-related activity took place along the Tennessee River is evident in the mortar stones that still exist in many areas along the river. A mortar stone is distinguishable by its smooth, rounded impression in the rock where grains, herbs, fish bones, and more were ground down with stone pestle tools and then used for recipes and medicines.

He also shared how a settler to the Appalachian Mountains during the 1700s documented the words of a Native chief: “The buffalo are our cows, the deer our sheep, and the bear our hogs.”

Though more numerous in Kentucky and Tennessee due to more grasslands and salt springs, buffalo were originally present in Macon County and the Southeast. Many buffalo trails, in fact, became Native trails and eventually wagon roads, highways, and railroads. Many of the trails Marshall found on early maps, some of which were redrawn for clarity, show the evolution of travel based on the buffaloes’ innate sense to instinctively know where the lowest mountain gaps and shallowest fords were.

“Historic maps have preserved vital elements of Cherokee geography and ecology and pioneer settlement,” he added.  “Besides, some of the maps are works of art with beautiful illustrations. Maps memorialize the landscape … the distinct features, the waterways. Native peoples were adept at memorizing geography, but it’s so important that we preserve these old maps to know what our area was like and how it has changed.”

Marshall presented in September at a Nantahala Hiking Club meeting and periodically speaks locally. To learn his presentation schedule and to view historic maps, email lamar@southeastheritage.com.

WNC preparing for influx of visitors for Total Solar Eclipse