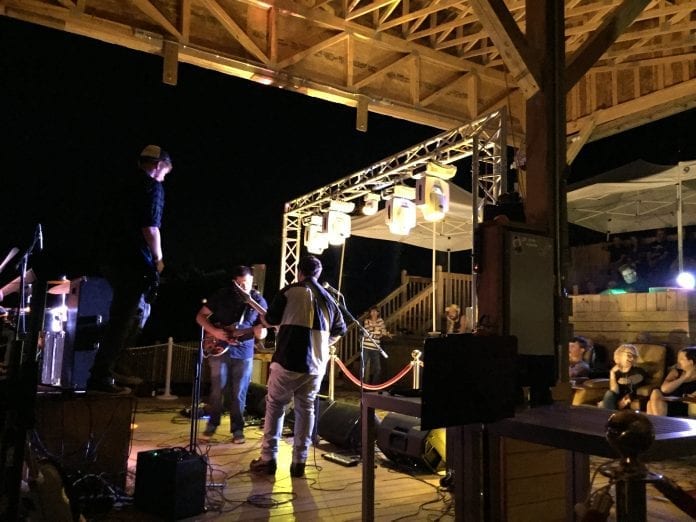 Just four days prior to JimBo Ledford’s breakout event at his Altered Frequencies music venue, he briefly sat in a county jail.

The local plumber and entrepreneur posted $3,500 bail August 3 for two misdemeanor and two felony marijuana possession charges with intent to sell after police found six baggies and 819 g of what appeared to be pot at his Grandview Drive apartment.

Ledford’s three minor children were present at the time of the consensual police search and ensuing arrest, part of what Ledford described as a “parental alienation” battle with his ex-wife.

“I’m excited for the whole story to be known and told but not until after I went to court and am found innocent,” Ledford said Tuesday morning following his court appearance while The Doors’ “The End” played on a speaker. “It’s a horrible story. It’s just the continuing, ongoing story about my divorce and my wife’s parental alienation between me and my children.”

Ledford, 43, said he believes his wife tipped off police to make a home visit and request access, which he granted. He also said he pays more than $3,000 per month in child support and alimony and that his ex-wife retains the former couple’s 8,000 square-foot home in Otto.

Ledford’s three children were sharing part of the summer with him and staying at his one-bedroom apartment, sleeping in bunk beds in the living room, until DSS followed a judge’s order early last week and returned the children to their mother.

“My kids live here in Franklin, but I’m not even allowed to see them because of the dangerous pot,” he said. “There was no intent to distribute, that’s not what was going on there.”

“Mr. Ledford fully cooperated with the officer and gave us no problems,” he said Tuesday. The Franklin Police Department refused to release the narrative of the arrest after it was requested by several media outlets.

An admitted marijuana user, Ledford nonetheless maintained his innocence, noting there were no scales in his apartment, which would be used if he were a distributor.

He added that he does not smoke “flower,” the bud form of the drug presumably found at his residence, and he suggested the substance found by police might have been legally purchased CBD.

A day after the arrest, Ledford was dressed in a plaid shirt and slacks with his hair pulled back into a ponytail as he gave a PowerPoint presentation to Town Council members. He was pitching a town-wide music and crafts event next April that he would spearhead with his nascent festival-promoting experience. The mood was receptive. His nervousness showed as he scrambled for help at times from his girlfriend, Melissa Spencer, 27, but his trademark humor was still present.

On Tuesday, Ledford said he was granted a continuation until October 8, during which time he intends to identify a lawyer.

“Financially it’s going to hurt me because I have to get an attorney,” he said. “Altered Frequencies already has a life of its own. There’s a lot of people in this town who want to kill it, but that’s not going to happen.”

While at the courthouse, Ledford inquired about a run for the unopposed town council seat occupied by Dana Mashburn, and he said he intends to launch a write-in campaign for the Nov. 5 election while defending himself against the drug charges.

“The people that do matter – the musicians, the artists the creative people around here that we are trying to attract, they love the place,” Ledford said of his venue, which opened as a nightclub this summer. “I don’t think this is going to hurt our reputation any more than it’s going to help it.”