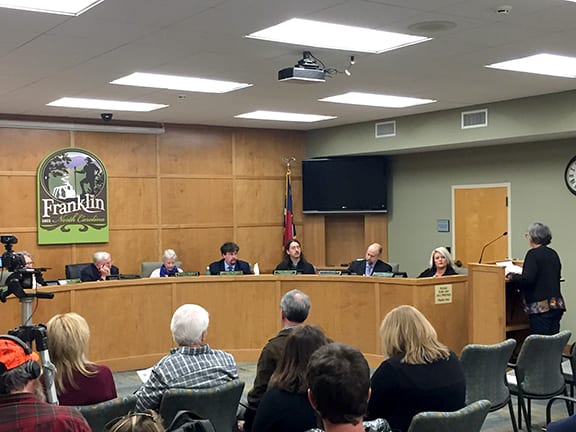 Kim Leister was nearly in tears when she addressed the Town Council Monday night. Abandoned properties in her Forest Avenue neighborhood in Franklin are occupied by squatters. Other properties with long-overdue tax bills have turned into virtual junk yards. The town’s $25 per day fine for violating an ordinance are summarily ignored by residents whose fines continue to mount as property values dwindle.

“Unfortunately, the one guy got out of prison and he’s now back and it’s filling with junk,” she said, noting that she researched the property zoning as C-2. “I don’t see anything under C-2 that has anything to do with junkyards.”

“He made a trailer out of the bed of a truck, and not in a cute way,” she added.

Leister said these sights are often the last thing visitors to Franklin see as they drive out of town, adversely affecting  property values and “our image as a town.”

“It’s horrible,” he said before circulating photos to other town council members. “We don’t really have a lot of teeth to fight this blight.”

“It’s legally perilous,” he said, encouraging instead to build a record of ordinance violations that can lead to a lien on the property, foreclosure, and allow the town to recoup expenses for cleaning up the mess. The timeline: About 60 days.

“I hope you’ll put this on the fast burner,” declared the mayor, calling on Fire Chief Matt Breedlove and Police Chief David Adams to explore whether they have an administrative right to enter the property without a warrant.

A nuisance filing by the town is expected within two weeks.

Planning Board Land Use Administrator Justin Setser informed the council that the town had no ordinance regarding construction of driveways. An amendment was proposed, and the draft specifications that may affect all future driveway construction, if approved, will be posted on the town’s website this week.

The new standards would include culverts, width and site dimensions.

Mayor Scott read a proclamation declaring February “Hunger Awareness Month,” while flanked by children from the First United Methodist Church Youth Group, who as a group fast during the annual “30-Hour Famine” to understand how it feels to go hungry. The statement asserted that one in eight Macon County residents is below the poverty line and could be facing hunger.

New Rotarian and town council member David Culpepper motioned to declare Saturday, Feb. 23 “Rotary Day” in the Town of Franklin in recognition of the service organization’s more than 100 year history and 250 local members.

The town also approved a schedule for approving the Fiscal Year 2019-2020 budget, with a public hearing and motion to approve scheduled for June 3.

Paint markings for approximately 10 on-street parking spots may soon be added to the south side of Main Street, between Derby Street and Patton Avenue, according to a recommendation by the Planning Board.

“I always assumed there was parking there,” said Mayor Scott. Then, with a chuckle, he added, “I guess I broke the law.”

The measure will be revisited in March once a technical detail regarding repeat parking violations is carefully reviewed, and weather is suitable for line painting.

The Town approved moving forward on the so-called Greenway Connection Project, a joint town and Macon County initiative to link the Little Tennessee River Greenway at the new town bridge at NE Main St. The county and town plan to share costs.

Franklin Fire and Rescue was also allotted $4,989.50 as a matching commitment in order to seek a North Carolina Forest Service grant to retool its wildland firefighting gear, including some gear nearing its expiration date.

Mayor Scott took the opportunity to recognize both the fire department and police department for the complex and exhausting effort to put down a large fire at the Franklin Ford dealership early Friday.

“That fire was a nightmare and it was cold,” he said.

Fifty-seven full-time town employees will see their first evaluations this year, with merit bonuses potentially added to the town’s budget after a trial year.

Town of Franklin Human Resources Director Travis Tallent noted that the town did not have a “fair and measured approach to employee evaluations.” The council approved instituting such a system, including training supervisors on how to fairly evaluate employees.

“We all like each other. I just don’t think we’re communicating with each other as effectively as we could or should,” said  Culpepper.

Council member Joe Collins surmised that the debate was whether town council members should attend board meetings, or be called a liaison and attend?

“We don’t have to decide anything tonight,” he surmised.

To which Mayor Scott agreed, “Let’s think about it, sleep on it and see what we think.”