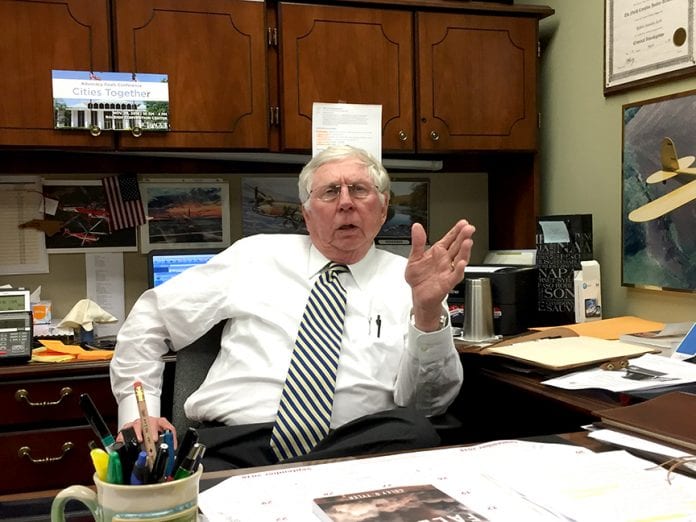 If there’s one thing Franklin Mayor Bob Scott can count on each day is that someone will express their concern to him about the proposed $1.5 billion Hospital Corporation of America (HCA) buyout of Mission Hospitals, including Franklin’s Angel Medical Center.

Unsatisfied with a perceived lack of transparency about the sale and frustrated by the absence of public comments by elected officials, Scott and Highlands Mayor Patrick Taylor traveled to Raleigh Nov. 9 in hopes of meeting with Attorney General Josh Stein.

Among the concerns Mayor Scott expressed were a desire to see the new hospital’s plans, know its location, a guarantee of services and assurances that the cost of care will not skyrocket when the hospital transitions to for-profit.

Mayor Patrick Taylor in his weekly message sent to media, added that he was interested in understanding the sale conversion process, including Highlands’ desire for a buyback provision should HCA decide to close the Highlands-Cashiers Hospital. He also discussed representation on a nonprofit board that would be formed and asked for the promised $15 million donation to the Highlands hospital foundation to be delivered at time of sale.

Scott underscores that a lot of questions remain to be answered.

“Sadly, it is a nonprofit hospital selling to a paid, for-profit hospital,” the mayor started. “In order to be real profitable and satisfy your shareholders, you’re going to have to start cutting somewhere. Now, do you cut services? Do you cut personnel? We don’t know. These are the things that HCA and Mission need to be honest about.”

Scott said television and newspaper ads boasting how great the new hospital will be are simply not enough.

“Tell us if there is a downside. At least man up to it and tell us what the downside is,” he said. “There has not been one negative word about this, it’s all been milk and honey.”

“We’ve asked questions ever since this process began,” said Macon County Commissioner Ronnie Beale, who rotates attendance about every three months with fellow commissioners at meetings hosted by HCA representatives. “As a citizen and as an elected official, we take it very seriously to have a hospital for our citizens.”

Beale said that as time has progressed, HCA and Mission “have been more forthcoming and that’s a good sign.”

“I understand their concern and I’m staying on the sidelines.”

Shields feels as though it’s not his place to publicly take a stand on the sale because he does not know enough about the details.

“I guess I’m just on the faith side that [HCA and Mission Hospitals] will do the right thing and that we’ll come out on top,” he said.

Scott wants to get ahead of the sale and encourage public officials to publicly put hospital representatives’ feet to the fire.

“There’s been some problems with transparency, and I know this goes along with business deals all the time,” said the mayor, calling for more of the hospital’s records to be made public. “I just feel it’s my duty to question this sale.”

“We are reviewing what we’ve received, which includes documentation from Mission, Dogwood Health Trust, HCA, and local citizens,” she said. “We’ve made three formal requests for information to Mission; Mission is providing documents on a rolling basis.”

As the attorney general’s office receives specific information, Brewer explained, it responds with follow-up questions. “For that reason, we do not have a finite list of outstanding items.”

“They’ve already done away with labor and delivery – that was a dark, dark day here when that happened,” said Scott. “It also had a demoralizing effect on some of our young families here in town.”

“I don’t think they will guarantee anything once you turn it over to a group managed by shareholders – there are no guarantees,” he said. “The number one priority is the presence of a hospital.”

Beale said to his knowledge, HCA only owns a half-dozen or so rural hospitals in its vast network of 178 hospitals. “They don’t have a whole lot of experience with rural hospitals.”

A July report about the Fortune 500 company by the Asheville Citizen Times quoted an HCA representative’s claim that HCA operates 20 hospitals in communities that can be considered rural. It owns or operates seven critical access hospitals, the designation shared by Angel and Highlands-Cashiers, for their isolated locations.

Shields prefers to give HCA the benefit of the doubt as one of America’s largest hospital networks with integrity and business ethics to protect. In 2003, HCA paid $2 billion in criminal fines and civil penalties for systematically defrauding federal health care programs, a fine that resulted from the longest and costliest investigation for healthcare fraud in U.S. history.

“I just feel like they’re going to try to do the best thing they can,” said Shields. “I may be just a fool out there, I don’t know.”

For Beale, once the sale goes through, “You don’t reverse that decision.”

“It’s like buying a car,” he said. “Are you going to trust that car salesman or not?”

Beale admits he, too, needs to do more research on the potential impact of the sale and the members of the Dogwood Health Trust, a nine-member nonprofit foundation billed as the “successor foundation of the nonprofit Mission Health system.”

If the HCA buyout goes through, after debts and obligations have been paid, Dogwood would receive the remaining proceeds of any of Mission Health’s leftover cash. HCA has committed to maintaining key clinical services for at least five years and keeping open all rehabilitation and acute-care hospitals for a minimum of 10 years, with the exception of St. Joseph’s Hospital in Asheville.

Mayor Scott wants assurances that the Dogwood foundation would be economically diverse. Beale and Shields agree the board lacks rural, local input.

Asked if it was the role of elected officials to question a private sale, Beale responded, “No. It is a role when it affects every person in our community.

“Healthcare is something that affects us all. And so even though it might be a private sale, it’s one that affects the citizenry of the community that you’re trying to serve. So, yes, sir.”

“The clock hasn’t yet started on the official review,” said Brewer, of the attorney general’s office. “We are still working with Mission and HCA to ensure that we have all information necessary for a complete review of the transaction.”

Brewer said the clock starts once her office receives all necessary information. “We can’t predict at this time how long our review will take.”

Despite tough talk about the lack of transparency and the need for local officials to demand more answers, Scott has faith in the attorney general’s office.

“I did get the sense that whatever decision they make I feel like it’s going to be fair and will protect our interest,” he said. “I don’t know that it will be a decision that we want to hear, but I do feel like that our attorney general’s office is very, very fair-minded and has the best interest of the public at heart.”

Beale notes that the process involves a lot of “hopes.” Hope for a new hospital. Hope that HCA will maintain services. And hope that the community will not lose its hospital if it is found to be unprofitable.

“We’ve got to hope that they provide excellent healthcare for our citizens at the end of the day. If that don’t happen, then what?” asked Beale rhetorically.

Scott acknowledged the county has struggled to attract and retain doctors and other medical professionals in recent years, and that having a hospital is integral to that effort.

“If you don’t have a hospital to practice at, you’re not going to attract doctors. I don’t care how many waterfalls, how many hiking trails we’ve got. You’ve got to have the facilities for these people to practice,” he said. “My concern is to make sure that we can get the best deal out of this sale as we possibly can that protects and helps the greatest number of people.”

Beale believes there is still time, and more tough questions need to be asked.

“If you get citizens riled up enough, you can ask some hard questions.”

Special needs game is defining moment for our community