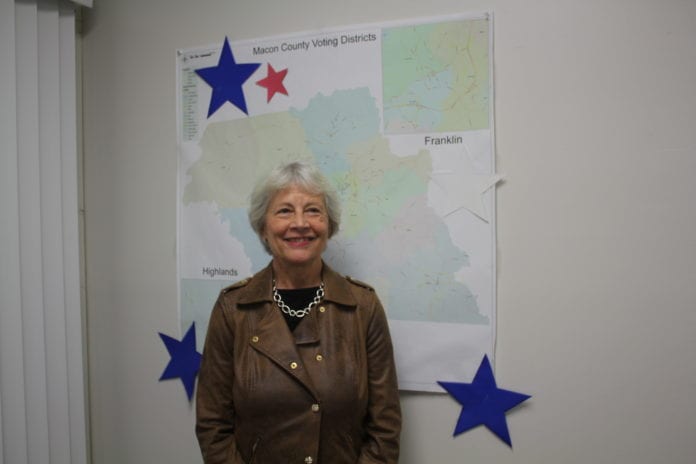 Franklin’s leadership will soon be changing as voters elected David Culpepper into office on Tuesday night. The Franklin Town Council had three open seats and Culpepper, a Macon County native and local business owner, along with incumbents Barbara McRae and Billy Mashburn were the top three vote getters securing the open seats.

“Thanks to the good folks of my hometown for entrusting me with this responsibility,” said Culpepper. “It’s a real honor and I sincerely look forward to helping Franklin prosper.”

Culpepper said that in his first term he wants to see the Greenway connected to the Macon County recreation park and also wants to see a bicycle loop established around Franklin.

McRae said she wants to continue working on projects in Franklin she has been passionate about such as the Nikwasi Initiative.

“We have a lot to do, and I think it is going to be a great team,” added McRae. “There is a lot of energy in town and that makes it possible to get things done when you have people feeling that excitement.”

Mashburn passed away on Nov. 1, so according to the state statute, the seat voters elected him to fill will now be filled by the town council after Culpepper is sworn into office.

State Statute reads:Â If a candidate in a nonpartisan election dies, becomes disqualified, or withdraws before election day and after the ballots have been printed, the board of elections shall determine whether there is enough time to reprint the ballots. If there is not enough time to reprint the ballots, and should the deceased or disqualified candidate receive enough votes to be elected, the board of elections shall declare the office vacant, and it shall be filled as provided by law.

While there were three other candidates who ran for the town council, JimBo Ledford, Greg Raby, and Angela Moore, those are not necessarily the only people Franklin’s leaders can consider when looking to fill the vacancy. In fact, they don’t have to consider those individuals at all. It is completely up to the board whom they select, and according to McRae and Franklin Mayor Bob Scott, who was reelected after running unopposed, the sooner the better.

“We have so much going on now, I would like to see his seat filled as soon as we possibly can,” said McRae. “I think we need the full board; we all have duties and when there is an empty seat, it is hard.”

Council member Joe Collins said that he didn’t see the need to rush an appointment and wanted to give the board time to consider their options and ensure the seat is filled to best fit the needs of Franklin.

Voter turnout in Franklin was less than ideal. There are 3,993 residents in the town of Franklin, 2,655 are registered to vote. In early voting, only 183 cast ballots. In Election Day voting another 194 people voted, meaning only 377 of the town’s 2,655 voters showed up at the polls.

Mayor Scott ran unopposed and of the 377 people who voted, 236 cast a vote for him, with 49 people writing in another candidate.

In the Town of Highlands Commissioners’ race, two incumbent candidates ran unopposed for reelection. Donnie Calloway and Amy Patterson were both reelected as was Highlands Mayor Patrick Taylor.