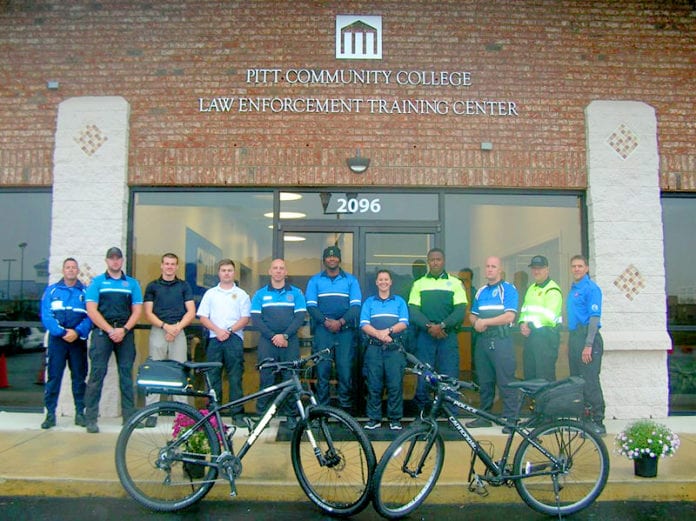 Law enforcement agencies around the country have been utilizing bicycle units for decades and in Macon County, local officers have employed the resource to meet the needs of the county’s unique demographic and geographic challenges.

Last week, Macon County Sheriff Office (MCSO) deputy Scott Nelson travelled to Winterville, N.C., for an intensive week-long bicycle patrol course at Pitt Community College. The course was taught by an instructor certified by the International Police Mountain Bike Association (IPMBA). While Nelson has been utilizing his personal bike to patrol pedestrian-heavy events such as Franklin’s version of the Great American Solar Eclipse, the Fourth of July Celebration at the recreation Park and most recently, trick or treating along Bidwell Street, Nelson’s training last week gave him a better understanding of his role as a bike officer and how it benefits the community.

“Scott is a bicycling enthusiast and actually approached me about volunteering to do this type of community policing,” said Macon County Sheriff Robert Holland. “Of course we pay him for his time, but like most deputies he wears multiple hats in what he does for our agency and the community.”

When Nelson isn’t patrolling for special events on a bike, he serves the department as a School Resource Officer at Mountain View Intermediate School.

“IPMBA is the leading agency that certifies police cyclists around the world,” said Nelson of his training last week. “The class was a very intense 40-plus hours and the physically most demanding class I have taken. There was lots of saddle time, slow speed skills work, long rides, and a few hours in the classroom learning about equipment, bike selection and fit.”

Nelson said other aspects of the course included patrol skills, health and nutrition for a cyclist, how to and when to deploy a bike unit, how to be visible to the public, how to ride properly, lane changes and more.

“We also spent a fair amount of time on the range shooting from different positions with the bike and responding to high risk calls with shoot/no shoot scenarios,” said Nelson. “On Wednesday night we rode up to Eastern Carolina University and rode up and down stairs till we were comfortable. We patrolled different areas of Greenville N.C. While on patrol in Greenville the locals were very supportive of us and very respectful.”

Nelson said the benefits of a bike patrol range from the visibility of an officer to the cost saving measures to the department.

“Having a bike patrol unit within the department can save the department a substantial amount of money,” said Nelson. “Think of fuel cost, vehicle maintenance, and also, a healthier and more productive officer and lower medical cost. An IPMBA study has shown that most officers die within five years of retirement but for the bike patrol officer it has extended the years.”

More than just the health benefits, Nelson said it gives him a unique opportunity to improve relations with people in the community.

“For me it is a great way to get out and build a relationship with the community I serve,” said Nelson. “Talking and educating parents on helmet laws, teaching kids how to ride safely and being a positive role model for our youth. In our present day and time, our youth need, more than ever, a positive role model. Law enforcement officers need to be that role model. Riding a bike further enhances that appearance and shows the community that our sheriff does care about our community. On the enforcement side, most people would not think of a cop riding up on a bike, so you can catch people in the act. While riding through traffic you have the opportunity to look into cars and spot open containers and drugs and seat belt violations. When traffic is heavy, it is the quickest way to get around.”

While sheriff’s offices commonly utilize bike patrol for special events, police departments often use bike units for routine patrol, which is the case for both Franklin and Highlands Police Department.

“Bicycle units help increase our visibility in the community,” said Adams. ‘Both of our officers are speciality trained on how to ride a bike while on patrol. It helps to build community relations and helps us maneuver easily in crowds.”

Chief Adams said Franklin Police Department’s officers have been using cycles for five or six years for special events and occasions but over the last year the department has turned to bicycle for routine patrol in congested or high traffic areas such as Main Street.

In Highlands, Police Chief Bill Harrell said his department has had a bicycle unit for the last 10 years.

“We have seven very well trained officers on our bike unit for the Highlands Police Department that has been formally established since 2007,” said Chief Harrell. “They go to nationally recognized training workshops with hundreds, if not thousands of agencies every year to learn cutting edge tactics and community services that can be executed from their bikes. Improved community relations, cost savings, faster officer response times and environmental benefits are just some of the reasons we put officers on bikes.”

Harrell said that his bike units are routinely used for patrol and community relations, teaching Highlands students the importance of bike safety, a program Nelson plans to grow for the Franklin area.

“While essential for community policing initiatives, bike patrols can be integrated into other operations and initiatives,” said Harrell. “Targeted enforcement, surveillance, traffic enforcement, and public order are just a few ways in which bike officers can be deployed. Even in large crowded situations, bike officers have a unique ability to develop a rapport with people, defusing situations before they get out of control. When they do, bike patrol officers can not only maintain swift response times, but their bicycles can become a useful barrier. Bicycle officers are trained to hold up their bicycles at chest level while standing next to another bicycle officer. When the command is given, the bicycle officers march as one unit with the very sturdy, very light bicycle frame used as a shield. Additionally, bike patrol officers tend to be healthier and more physically fit than their car-bound brethren. This has the side benefit of improving the department’s image and cutting down on donut jokes.”