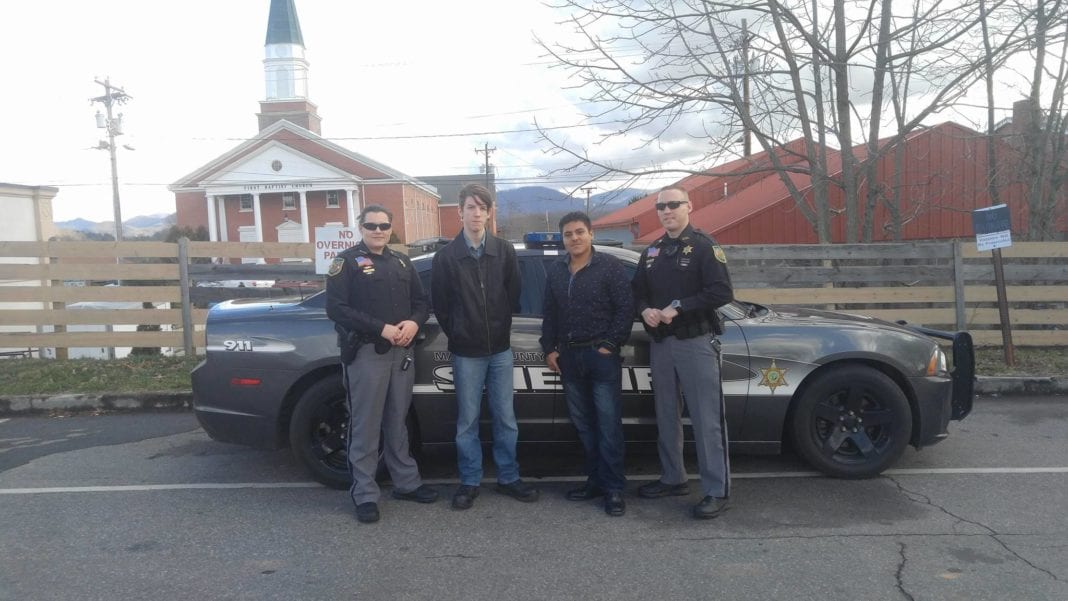 Two Macon Early College students took a ride in the back of a Macon County Sheriff’s Patrol vehicle last Friday, but for all the right reasons.

The pair started the day off patrolling the county, while discussing the duties of a Deputy Sheriff.

“We toured the jail, courthouse, and MCSO offices, and covered the many career possibilities within a Sheriff’s Office and law enforcement in general,” said Buchanan. “It was an eye opening experience for the students to see what we do, outside of the general misconception that we just ‘write tickets.’ Both students were very engaged and asked some great questions.”

Alvarez-Chavez said he decided to job shadow because he wanted to know more about a career he plans to pursue.

“The main reason I decided to shadow the Macon County Sheriff’s Office is because I’m interested in a career as a police officer. I also would like the opportunity to protect and serve people by keeping the community safe,” said Alvarez-Chavez. “I learned many things while shadowing with the Sheriff’s Office: an officer has many options and opportunities during their day, including patrolling in their cruiser and giving tickets. In addition, I also learned from an officer who told me, “becoming a police officer takes pride, respect, and professionalism to others.”

Deputy Buchanan said that even if neither student ends up pursuing a career in law enforcement, the experience is something he believes will benefit both of them.

“If neither end up considering a career in law enforcement, I still wouldn’t consider the time wasted,” said Buchanan. “It was good for them to see what we really do and just get to hang out with us for a few. I know for me, it  was a good experience to be able to share something I am so passionate about with a future generation. I believe we have to do that. We have to set the ground work for the future generations and leave this career better than we found it. I believe we gave those boys a day they’ll never forget, and it gave us a reminder of why we do the job in the first place. To serve our community.”

Like Alvarez-Chavez, Rowland also wants to pursue a career in law enforcement.

“While studying at MEC I have grown a fascination with Criminal Justice and have heavily considered finding a career in that field,” said Rowland. “My knowledge previously was somewhat limited but this shadow opportunity allowed me to further my own knowledge on the subject and give me a better understanding of what a job in law enforcement would entail.”

After spending the day with Deputy Buchanan, Rowland said that he was able to learn that the law enforcement field has various positions and opportunities to serve.

“I, as well as many individuals and counselors I’ve spoken to about going into law enforcement have always mentioned or thought of very typical positions like being a police officer or detective or School Resource Officer (SRO),” said Rowland. “I found it amazing the large diversity in positions as well as opportunities. There are countless jobs that one could work in while staying within this field.”

Having the opportunity to shadow the sheriff’s office, and to see firsthand what they do, is something Rowland said he wouldn’t have been able to do in the classroom.

“Honestly, I enjoyed the entire time I spent shadowing greatly, it really provided an all new perspective and insight into what police officers go through every day as well as what my life might entail if I continue down this road,” said Rowland.

U.S. Forest Service: No end in sight for wildfires burning in...