Memorial Day in Franklin was a bit different this year, with the onslaught of 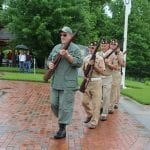 subtropical storm Alberto slamming its way north into the Gulf over the weekend. Despite the storm’s impact on the mountains, the one thing it didn’t change was the devotion so many county residents have historically shown toward honoring the memories of this country’s fallen veterans. Events were held despite the storm giving new meaning to the term “rain or shine.” 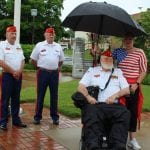 At the Memorial Park, veterans held their service the same as they always have, performing their rifle salute as is tradition.

Public turnout was diminished to a degree, according to Navy veteran and Rabun County resident, Benjamin Davies.

“It’s good to see so many still came out and made a show of support,” he said. “Of 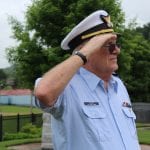 By most estimates, overall turnout at the park services exceeded a hundred.