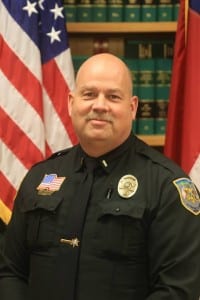 When Mike Trammel was hired on with the Macon County Sheriff’s Office 30 years ago, he was paid $7.11 an hour and had to work for six months as a part time employee before being promoted to a full time employee. After three decades with the MCSO, making him only the second officer in the department’s history to achieve such, working under two sheriffs and watching a slew of changes in law enforcement, Trammel was honored with a retirement reception last Thursday at the Robert C. Carpenter Community Building.

“Mike has been an excellent employee and served as a great supervisor,” said Macon County Sheriff Robert Holland. “He has always been someone we could depend on. He was a committed public servant and will truly be missed.”

Trammel began his career in law enforcement 30 years after being invited on some ride-alongs by the man who is now his father-in-law.

“When I couldn’t take out his daughter, he would let me ride along in his patrol

car,” remembered Trammel. “The first time he ever took me for a ride, we got in a chase, so from the beginning I got to see the exciting part of the job.”

The excitement behind being a police officer, paired with the desire to help others after coming from a difficult childhood himself, is what led Trammel to pursue a career in law enforcement.

“I thought by becoming a police officer, I might have the chance to help someone someday, and over the last 30 years, I think I have been able to do that on more than one occasion,” said Trammel.

Trammel was hired on with the department in December 1986 to work part time as a jailer and dispatcher. As soon as he turned 21, he was promoted to full time road patrol where he worked for 15 years. As a road deputy, Trammel worked under Andy Shields, the only other deputy in the history of the MCSO to reach the 30-year milestone.

“When I first started with the department, Andy gave me a pep talk and told what it would take to be successful, and that is something I have kept with me my entire career,” said Trammel.

After working on road patrol for 15 years, a position came open with community services/courthouse security within the sheriff’s department and Trammel decided to transfer. Trammel led that department as Community Service Lieutenant until the day he retired.

“I feel like I was able to do the most good working inside of the courthouse,” said Trammel. “You get to see a different side of people. They are more receptive to advice you have to give or things you have to say. I was also able to talk to a lot more people about Jesus than when I was on the road.”

After three decades in law enforcement, Trammel said the thing he has seen change the most is the support from county leaders. “When I first started, Andy and I were the only officers who wore bullet proof vests because we bought them ourselves. The first pistol I carried, I only had because I bought it myself. The county leaders back then didn’t want to invest in the department because they looked at officers as a revolving door of employees.”

Trammel said that while he started out making around $14,000 a year, Sheriff Homer Holbrooks would routinely ask the county commissioners to raise the deputy pay, but they didn’t see the need to do so, thinking that officers would only last a couple of years and then leave.

“If there is one thing that I hope changes not just for law enforcement in the county, but for all county employees it would be to see the county’s pay study be implemented that they have been working on,” said Trammel. “All of the county employees work so hard and I know that our current commissioners recognize that and have been working hard to bring the county pay up to par. We have come along way since I first started, but there is still some work to be done.”

For the last 13 years, since Sheriff Holland was elected to office, Trammel has sat through each monthly meeting of the Macon County Board of Commissioners, serving as security for meetings. While meeting security is just one of the duties Trammel has had while working court house security, county commissioners shared their appreciation for his service to the county.

“Mike Trammel is a class act and deserving of his retirement,” said Macon County Commissioner Kevin Corbin. “He has worked hard and has represented this county and the sheriffs department well.  Congratulations Mike on a job well done.  We wish Mike well in his new endeavors which apparently will be first completing a long ‘honey-do list’ from Dawn.  Call us Mike if you need help and need to come back to work to get some rest!”

After a few months of retirement, and doing a “honey do” list his wife Dawn has made for him, and camping trips planned all summer long with his wife and three kids, Trammel said he plans to continue working in some capacity with the sheriff’s department.