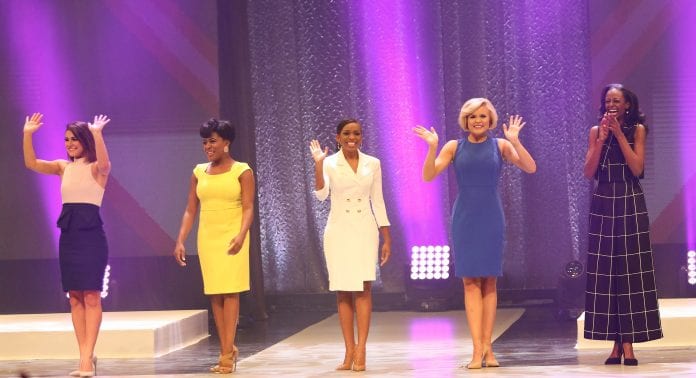 Paige Henderson was not a pageant girl.

That student loan debt was on her mind when she attended a concert at the Biltmore House last year, and first thought about representing Asheville.

She looked into the Miss Asheville-Miss Blue Ridge Valley Scholarship Contest and reached out to fellow App student Hannah Harvey, who was Miss Asheville 2018.

“She encouraged me to compete,” recalled Paige, 24, while sitting in a bicycle rickshaw before Saturday’s “Show Us Your Shoes” parade down Fayetteville St. in Raleigh.

“I thought, ‘What an amazing city to represent,’” she said. “I could fund my entire education.”

Paige won the Miss Asheville contest in November, a $1,000 scholarship and a place in the 83rd Miss North Carolina pageant held Saturday in the state capital.

Paige has the kind of wavy, shoulder-length, blonde hair that bounces when she laughs. She has bright blue eyes and dimples when she smiles. But that wasn’t enough to cut it.

Suddenly, Paige was a pageant girl. She had six months to prepare for competitions worth thousands of dollars for excelling in private interviews, on-stage questions about current events, talent performances and style points.

By the time she was showing off her eight-inch green high heels with a bright red bow and a miniature, decorated Christmas tree Saturday morning, Paige had garnered another $2,300 in scholarships at the preliminary competitions last week in Raleigh, including winning the on-stage interview category.

“This is just a better week than I ever could have hoped,” she gleefully said before the evening competition.

From babysitters to serial competitors

Standing along the parade route with his parents and two siblings was Sammy Pyle, 5. He was there to show support for one hometown girl in particular: his babysitter, Miss Capital City Grace Dirig.

“Her name is Grace!” shouted Pyle. “She likes playing Legos with us.”

Some particularly loud cheers came from a small group from Charlotte who lined the sparsely populated street Saturday morning for the inaugural shoe parade. Among them was Charlotte Pettis, mother of Miss Taste of Charlotte Jailah Pettis, 19, who earned a $1,500 scholarship.

“She’s a junior at UNC-Greensboro on the chancellors and deans list,” said a proud Charlotte Pettis, while walking briskly down the street to catch up with her daughter. “She’s a former Miss Cleveland County Fair, she’s the former AKA debutante queen 2015, and she was the first runner-up in the Miss Gastonia pageant in December and she’s the Taste of Charlotte queen now.”

Charlotte Pettis talked about Jailah’s advocacy message, sickle cell anemia, which she chose because a cousin suffers from the disease.

After the 17 available bicycle taxis took the first group of girls down Fayetteville Street, a slight delay ensued as the cyclists hurried back to take the next two groups, totaling 42 contestants, unevenly representing counties and cities across the state.

Miss North Carolina 2018 Laura Matrazzo followed in a convertible, then a special guest, Winston-Salem native, Miss America Nia Franklin. Franklin won while representing the state of New York, and wore a glorious American flag sequined dress and her crown when she arrived to a crowd of about 100 waiting in front of the Raleigh Memorial Auditorium. Fervor for the evening event had already begun.

Throngs of young women with highly stylized hair and slim fitting, brightly colored dresses took photographs near the illuminated fountains and red carpets leading to the auditorium doors Saturday. Some men wore bowties and pastel-colored suits. Others wore oversized buttons on their lapel with the face of their daughter.

“I’m a dad – at least what’s left of me,” said Reggie Grant, 49, whose daughter was Miss Cabarrus County Déja Grant. “My nerves are shot.”

“It will show tonight, she’s worked really hard: the fitness, interviews, onstage question, platform – it’s like a job interview,” he said. “It is a job – the winner has to take a year off of school and do events with an $89,000 salary.”

Reggie Grant said all the preparation expenses are on the parents, who hire coaches for each aspect, including walking, modeling, her evening gown and practicing for the onstage questions. The price tag to parents is $200-$225 per hour for industry expertise.

“I used to think it was just a swimsuit competition, but these girls aren’t just pretty girls, they’re intelligent,” he said. Déja Grant had already earned $2,000 in scholarships before the start of the night.

In the bar line, two women debated the elimination of the swimsuit category of the competition this year.

“I like showing how hard they worked on themselves,” said a 23-year-old event volunteer who did not have permission to disclose her name. She explained that the body toning and fitness for the swimsuit category were tough work.

“It started as a swimsuit promotion on the boardwalk,” responded Lucinda Stewart, 49, who is an industry judge who was not judging for the Miss NC competition Saturday. “It’s no longer the core of what it was meant to be.”

The swimsuit competition was eliminated last year, and the evening wear category allows candidates to choose a wardrobe that expresses their own style. Candidates were also given more opportunities to advocate for their social impact initiatives and show how they qualify for the job of being Miss America.

Miss North Carolina 1969 Patsy Johnson Gilliland, whose mother was born and raised in Macon County, opened the competition on the 50th anniversary of her crown by singing an operatic version of the national anthem as larger-than-life stars and stripes were projected across the walls of the auditorium.

Gilliland said she looked at the nervous, excited faces of the girls before the competition Saturday.

“Fifty years ago, I was in your shoes,” she recalled telling them. “If you don’t win, you still have all these wonderful gifts and you are valuable.”

The fast-paced, television event began with the announcement of the Top 15 – which included Grace, Déja and Paige. Shrieks and hugs filled the stage, and young girls shrilled in the audience. The Top 15 were determined based on three days of preliminary competitions that included a nine-minute private interview with judges.

On stage, Paige was announced as the   co-winner of the Miss Congeniality award, selected by her peers for exhibiting the spirit of Miss North Carolina, and notching another $500 in scholarship money.

Then on live TV, each had 20 seconds to respond to a current events question from a judge selected at random, worth 20% of their final score. The questions ranged from freedom of speech and white supremacy protests to a potential Supreme Court revisiting of the Roe v. Wade decision and Pres. Trump’s immigration policy.

Déja talked about how women’s vulnerability makes them relatable. Grace addressed education budget cuts to the arts. Paige spoke about women in the workforce.

Of the three, only Grace advanced two more rounds, including a backstage interview with judges for another 25% of the score, to reach the Top 5. The last category was the talent category, worth 40% of the final score.

Gilliland stepped back on stage for a reprise of the Porgy and Bess medley she sang in Charlotte 50 years prior that lifted her to the NC crown, led to her selection for a talent award at the Miss America competition and a USO Tour performance for troops in Vietnam in August 1970.

The women changed into evening gowns and delivered their social impact statements in just 10 seconds for a final 15% of the score.

Grace was the first of the five announced, placing fourth runner-up and earning another $2,000 in scholarship money. Another $18,000 in scholarship money was given out before Miss Jacksonville Alexandra Badgett was named the next Miss North Carolina, crowned on stage and interviewed on television before four men in black suits whisked her away to rest for her next Live T.V. interview at 6 a.m. and the start of her year as Miss North Carolina.

One trip around the moon

Exhausted contestants trickled out of the dressing rooms and through the lobby after the competition, followed by tired family members carrying plastic containers of shoes and makeup and armfuls of clothes.

Grace was holding a bouquet of pink roses and her black and white evening gown when she stopped to respond to a few questions.

“It’s really surreal right now,” said the future broadcast meteorologist. “The greatest thing is I am graduating from NC State debt-free from the scholarship money I earned this week.”

Asked if she thought she’d make it the Top 5, she said: “If you believe in something you have to speak it into existence, and you have to believe it and believe in yourself.”

Paige was standing with a friend and wearing a white and gold dress with rhinestone loop earrings.

“There are little girls who work their entire lives just to be on that stage and I was fortunate enough to make it with one try,” said Paige, who at 24 was the second oldest contestant and will age out. “It was my one-time trip around the moon.”

Paige estimates that the $3,300 she earned this week will cover fall tuition. Asked if the whole experience made her reconsider what she can achieve, she said, “One hundred percent.”

“I’ve definitely built back some confidence that I may have lost in my teen years and early 20s, so I’m feeling pretty good,” she said. “That’s a cornerstone of the Miss America Organization is building up women so they can enter their lives, enter the workforce successfully and become a new generation of leaders.”