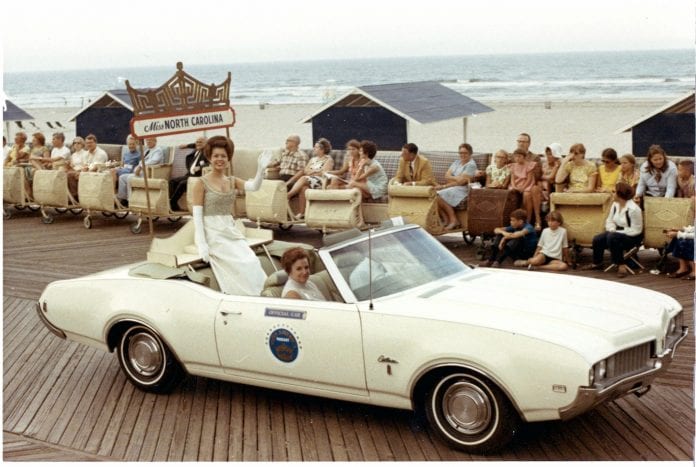 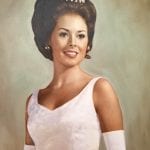 When Grace Bradley Johnson couldn’t get three pennies from her mother to buy cloth for her sewing class in depression-era Macon County, she had enough of the poverty of Western North Carolina.

In 1934, at age 16, she picked up and followed her older brother to Winston-Salem for work.  There, she found a job at the candy counter at Woolworths and met a singer named Connette Johnson, who would always sing her the line, “I found a million dollar baby at a 5 and 10 cent store.”

They married and their daughter, Patricia Elaine Johnson, was already singing at Baptist churches by age 2.

To keep performing, and to grow her audiences, “Patsy” entered beauty contests in the 1950s and 1960s.

“My Macon County mom was with me every inch of the way,” said the now Patsy Gilliland, 69. “Mom had grown up so poor.”

Grace Bradley Johnson had to wear her brother’s hand-me-down overalls growing up with nine siblings, but she wouldn’t have that for her daughter. When she saw pictures of pretty dresses in magazines, she sewed them for Patsy.

“She made all my clothes,” remembered Gilliland, who made regular trips back to Macon County to visit her family in the Oak Grove community, singing at Oak Grove and Cowee Baptist churches.

Gilliland continued singing and competing when she began studying voice at Meredith College in 1969. She won the local Miss Raleigh competition and impressed the judges at the Miss North Carolina competition, held that year in Charlotte.

“I liked the talent [portion] because I’m a singer,” she said, recalling singing a medley from Gershwin’s 4“Porgy and Bess.” The swimsuit part of the competition was the part she least enjoyed.

“I hated that part because I hated walking in front of the people in a swimsuit,” she said. “It’s like, ‘I’m so much more than that!’”

When she was selected as a finalist for Miss North Carolina, she looked to her left and right on stage and thought: “Well, it’s going to be one of them.” But the judges announced Patsy.

“One of the judges said, ‘Frankly, we like your personality and your sense of humor, Patsy,’” she recalled.

Winning statewide pageant meant dropping out of school for a year and non-stop ribbon-cutting ceremonies, Piggly Wiggly openings, parades and – her favorite part – singing at churches and speaking to young girls.

“For me, it was a wonderful year,” she said, of the year she traveled in a pageant-provided Oldsmobile Tornado with the pageant logo emblazoned on the side. “I’m a performer and I got to perform at the drop of a hat.”

She learned some tricks, too: like wearing long underwear under her evening gown to stay warm during parades.

She realized that not everyone would like her, but her confidence grew nonetheless with each public speaking event, each young girl touched. In her speeches, she emphasized colorblindness and love in the post-civil rights era south.

“The Lord said, ‘I have chosen you, now get out there and be you!” she explained. “Once you get that knowing right down in your heart that you’re doing it for a bigger purpose than yourself, then, I think, that really does help, and it helped me.”

On to the Miss America pageant

Shortly after being crowned Miss North Carolina in June 1969, Gilliland was to compete in the Miss America pageant in September. First, she had to lose her “freshman 10,” the pounds she had put on after starting college, and prepare for the pageant.

She would walk with a book on her head and run up and down the four flights of stairs in her female dorm at Meredith to exercise. She sang and she trained with pageant coaches in Raleigh.

For the September competition, a bus from her Mineral Springs Baptist Church and a bus from Meredith College, including the college president, drove up to Atlantic City.

“It was overwhelming – a lot,” she said of the two weeks of rehearsals that preceded the competition, where she was not allowed to see her family or friends. Feminists were burning bras on the boardwalk, but she didn’t see them either.

Some of the girls had spent a week in New York buying designer clothes with their huge budgets, one Patsy didn’t have. Nonetheless, she still feels like the competition was more genuine back then.

“This was a good time,” she said. “After this, it becomes more cutthroat. At the state level, most girls are like the girls next door.”

Gilliland did not place in the top 10, and she felt a deep disappointment for all those who would come to see her. But she was thrilled when she was told that her non-finalist talent award meant she was one of six women who would join Miss America on a USO tour to entertain troops in Vietnam.

“This is one of the things I really wanted to do. I wanted to be in the troop,” she said. Even though she hated war, she hated worse the cruel treatment veterans were getting upon their return. “I think we needed to encourage them and say, ‘There is a reality beyond this war, you are valued.”

She spent two weeks practicing a routine in Atlantic City with the other girls, including Susan Anton, who would later go on to become an actress. Then she flew to Saigon.

In her suitcase were two sequined performance dresses, thick at the top with chiffon underneath. There were two, she explained, because the non-breathable dresses would be wet in high-humidity Vietnam in August.

“Our first dress rotted!” she said.

Gilliland remembered that the shows reminded the troops of back home. Troops even saved their rations to make the girls a cake when they visited, “I was the only girl who actually gained weight in Vietnam – I love cake!”

Gilliland remembers what she liked most: hospital visits, where she heard troops recount exactly how many days “and a wake up” they had left in Vietnam.

When she returned, Gilliland wasn’t afraid to tell news reporters like she saw it, even being misquoted by Paul Harvey on the radio.

“I think when I talk to the boys, they are ready to be out of here,” she recalled saying, not “the heck out of there,” like the papers quoted her, and certainly not     “H-E-L-L, I have never said that!”

Patsy Gilliland went on to study music at Indiana University, completing her graduate degree and meeting her future husband, tRev. Peter Gilliland, with whom she has been married for 44 years.

She continued to perform in the United States, Europe, Africa and Asia, before settling in Rocky Mount, N.C. There, she worked as a voice coach and helped found the Tar River Orchestra and Chorus and has directed the Tar River Children’s Chorus for 25 years.

On a road trip through western North Carolina in early April, Gilliland and her husband stopped in Macon County to see her cousins in the Oak Grove community: the Parrish and Scruggs families.

She lunched at the house her uncle, Ralph Bradley built.

“They said I spoke like a city girl because I grew up in Winston-Salem,” Gilliland recalled from the visits of her youth. After a couple weeks staying with her aunt, Leo Gibson, when she was young, she would feel her Macon County roots return.

She felt them return again on the sunny afternoon spent at the farmhouse in Cowee.

“I’m getting back to my Macon County accent!” she exulted.

At the 50th anniversary of her crowning on June 22 at the Miss North Carolina pageant in Raleigh, interviews with Gilliland will be televised and she will be honored among the “Old Goldies,” former pageant winners.

Reflecting on the meaning of her pageant victory, her year touring North Carolina, and her many years as a mentor, she remembered what she still tells young women and girls, “You be the best you can be and you will not lose, because you will be a better you.”

Courthouse to be outfitted with Charters of Freedom monument

The latest attempt to get WNC up to ‘high speed’