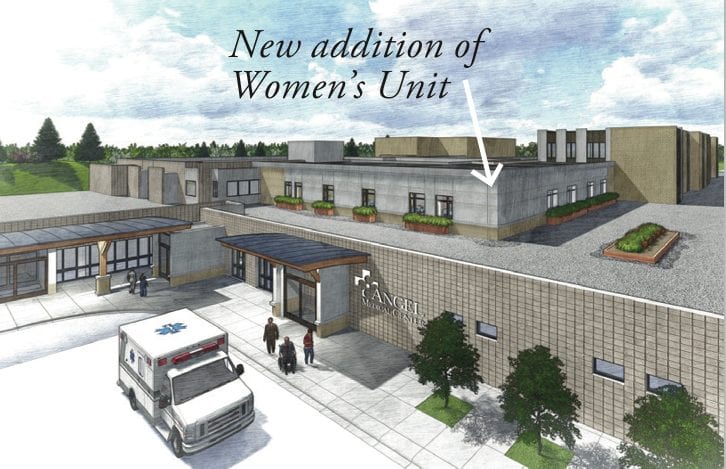 Since contracting with local hospitals Angel Medical Center and Highlands-Cashiers hospital, community investment has been an integral part of Mission Health’s involvement in the local hospitals, as it has been in their history as an organization.

“It is our goal to be at the forefront of innovation that brings the latest technology to our patients, close to home,” said Mission Health officials.

In Macon County, the two hospitals account for $11 million in renovations and expansions that will allow Angel Medical Center and Highlands-Cashiers hospital to better serve patients in the region.

Renovations at Angel Medical Center are centered around expanding the existing women’s unit. The projected budget for the project is $4.3 million. The expansion of Angel Medical Center’s Women’s Unit will allow the facility to accommodate the increasing number of births in the region. When the project is finished, the medical center will feature nine post partum rooms and four labor and delivery recovery rooms.

“I hope this will continue to lead to Angel becoming a regional medical center which would have a big economic impact on Franklin, not to mention the services it would provide for our residents and visitors,” said Franklin Mayor Bob Scott. “Hospital expansions are necessary to vibrant towns.”

On April 26, the Highlands-Cashiers Hospital broke ground on the new $6.7 million Emergency Department expansion. The expansion will replace the existing emergency department and will add 6,800 square-feet to the current facility’s footprint.

“I support the efforts of Mission Healthcare to expand the operations of Highlands Hospital in the area of emergency care and response,” said Highlands Mayor Patrick Taylor. “All quality communities have to have access to good health care, and we have been blessed in that area.”

By the time the project is completed, the hospital will have a new, mountain-themed main entrance to the hospital that includes a reconfigured main lobby that is both physically and visually connected to the new emergency department. The project also includes plans for semicircular waiting room with views of the natural surroundings of the community to provide patients and family members with a more comfortable space.

The new emergency department features a Triage Room and four exam rooms, one of which is defined for isolation patients. An additional exam room is designed to safely accommodate behavioral health patients. The expansion plans also included a late, state-of-the-art Trauma Room. All exam rooms will be clustered around a central nurse work station and medication station. There are also plans for a new ambulance canopy.

The lobby will be expanded to include seating for 20 and public bathrooms. There will also be additional patient, clinical, and support staff spaces to make the hospital more user friendly.

The total cost of the expansion at the Highlands-Cashiers Hospital is $6.7 million with $5.6 million of ht at being raised through 56 local philanthropic donors. Mission Health’s commitment to the project is $1 million.

“We are blessed to already have great facilities at Highlands Cashiers Hospital, but I am really excited about the expansion because it will only better facilitate the emergency needs of our residents and visitors,” said Macon County Commissioner Jim Tate. “The Highlands Cashiers Hospital is also one of the largest employers in the area and thus provides a tremendous economic impact for the Highlands community and Macon County.